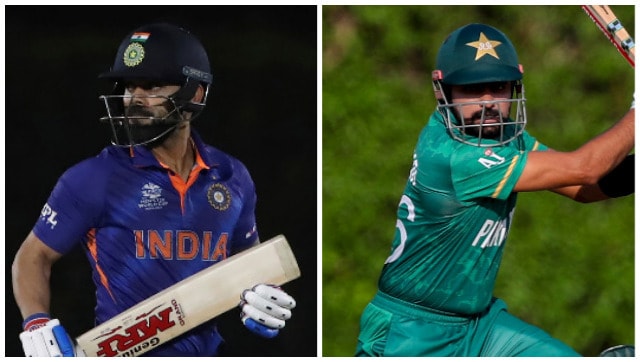 That brings us to the end of our coverage of the India-Pakistan encounter. Few would have expected a team of India's calibre to get outplayed the way they did today, as they ended up getting outplayed in all departments. What a day to be a Pakistani cricket fan. Generations grew up waiting for their team to beat their neighbours in a World Cup match, and that dream has finally come true today.

Hope you enjoyed our coverage of the final fixture of the opening weekend of the T20 World Cup. On behalf of my colleague Ujwal, this is Amit signing off!

Babar Azam, Pakistan captain: "This win is a team effort, and the early wickets were very helpful. It gave us confidence and spinners also bowled well. We executed the plans very well. We as openers like to keep things simple and as the wicket kept getting better, we wanted to bat till the end. We will take confidence from the win but the tournament is not going to become easy. Before the match, I told players that we need to forget the history."

Virat Kohli, India captain: We did not execute the things we wanted to. Credit should be given where its due and Pakistan outplayed us today. We always knew we needed a total that is competitive. They did not give us any chances. It played pretty slow in the first half. Little bit of dew helps the ball come on better later. When you know conditions will change later, you need extra runs. Quality bowling from Pakistan upfront. With the dew coming in in the second half, the slower bowlers were not as effective. Just the start of the tournament, not the end, so important to stay composed. Certainly not the stage where we will be thinking what will we do moving forward.

Shaheen Afridi: "First time we've beaten India and it is because of the wishes from the Pakistanis. The plan was to bring the ball back in. It was not easy to bat against the new ball. Babar and Rizwan deserve a lot of credit. We need to carry forward this momentum."

Shaheen Shah is the Player of the Match.

Tough day for india 🇮🇳 and @ManUtd I’m sure they will bounce back ! Congratulations to Pakistan 🇵🇰 and Liverpool ! #timeforbed 😢😓

Shami's final over also turns out to be the last over of the match as the Pakistanis finish off in style — Rizwan smacking a six and back-to-back fours to bring the equation down to single digit, followed by a single, with Babar coming back for a second to seal the deal. Pakistan thrash India by 10 wickets — the first time the Men in Blue have been handed a 10-wicket loss in Twenty20 Internationals — and end their winless run in World Cups in the process.

Some emotional celebrations out there at the moment, and Pakistan deserve every bit of joy right now for the clinical manner with which they've gone about business today.

Congrats on a fantastic victory #Pakistan. This was a clinical effort from ball one. The initial spell from Afridi to dismiss Rohit and Rahul made all the difference. Deserving winners #DoddaMathu #INDvPAK #T20WorldCup

Terrific from Pakistan. Clinical chase. Sharp in the field. And that man - Shaheen Shah Afridi. The ball to KL Rahul was as dreamy as it gets.

From winning the toss, to Shaheen’s first over, through to the bowling changes & management of the boundary sizes, all the way through the run chase - #PAK were impeccable. It’s hard to believe what we’ve just seen. The favourites have been swatted aside. #T20WorldCup

PAKISTAN HAMMER INDIA BY 10 WICKETS! India's unbeaten run against their South Asian arch-rivals, a streak that stretches back to 1992, is finally broken! Skipper Babar Azam collects the winning runs, dashing back for a second run after guiding the ball towards long on. PAK 152/0

Meanwhile, Hardik Pandya was hit on his right shoulder while batting earlier during the game, and has been taken for scans since. Will that be it for the all-rounder in this T20 World Cup?

FOUR! Mohammad Rizwan brings up his half-century in style, going for a short-arm pull through the midwicket region off Bumrah. The wicketkeeper-batter has taken 41 balls to get to his ninth fifty in T20Is, hitting three fours and two sixes along the way. PAK 116/0

100 partnership up between Babar and Rizwan for the first wicket, the former collecting a single right after bringing up his half-century. PAK 100/0

SIX! What a way for Babar Azam to bring up his half-century — his 21st in T20s — pulling over the midwicket region off Chakravarthy! Started slow earlier in the innings, but has since muscled his way through and is very much dominating the Indian bowlers. PAK 99/0

Fifty partnership up between Rizwan and Babar for the first wicket, the former collecting a single in the eighth over to complete the milestone. Rizwan has played the aggressor so far in the innings. Has come at nearly run-a-ball, with the pair consuming 48 balls so far. PAK 50/0

Slower length ball outside off. Pandya wanted to clear the straight boundary but skied it to deep cover where Babar takes a good catch.

Slower ball from Hasan does the trick as Jadeja flicks it to mid-wicket who takes a good catch after covering some distance.

Wrong'un does the job for Pakistan and Shadab. Huge wicket this as the dangerous stand is broken. A slow tossed up ball. Pant went for a lofted sweep but only managed a top edge that Shadab took wide of non-striker's end.

Keeper Rizwan dives to his left to pull off a brilliant catch. The length ball straightened just a bit as Surya tried to play the cut. It resulted in a thick outside edge and Rizwan responded excellently.

Shaheen Shah strikes in the first over. Rohit Sharma gets out for a golden duck. Fuller delivery, tailed in to trap India vice-captain.

We are moments away from the toss. Virat Kohli and Babar Azam have made their way to the middle.

Preview: India and Pakistan renew their high-profile but one-sided cricket rivalry on Sunday in a T20 World Cup blockbuster watched by hundreds of millions of fans across the globe.

Virat Kohli's India have beaten Pakistan in all of their 12 matches at the T20 and 50-over World Cups.

Pakistan, however, go into the contest with 10 wins in a row in the United Arab Emirates, their home away from home for most of the last decade.

It will be the first time the two nations have clashed since the 50-over World Cup in 2019.

Of the 12 World Cup losses for Pakistan, five have been at the T20 tournament.

Two were at the inaugural event in 2007 — a group game decided by a 'bowl-out' and a five-run loss in the final.

"To be honest, what has passed is beyond us," said Pakistan captain Babar Azam on Saturday.

"Records are meant to be broken."

The tickets for the match in Dubai were sold out within hours of going on sale after the UAE government allowed a 70 percent crowd for World Cup matches in a relaxation of the Covid-19 restrictions.

The South Asian nuclear rivals have only played in multi-national events like World Cups and the Champions Trophy as strained relations have stalled bilateral cricket since 2007.

Pakistan did tour India in 2012 for five limited-over matches but ties were not fully resumed as the two nations continued to be at loggerheads over multiple issues, with the disputed region of Kashmir and terrorism heading the list.

"The matches between Pakistan and India are always full of intensity so we need to perform well in all three departments of the game," said Babar, who has two T20 International centuries to his name in 2021.

India and 2009 champions Pakistan are placed in Group 2 of the Super 12 stage of the tournament along with New Zealand, Afghanistan, Scotland and Namibia.

The top two in each of the two pools progress to the semi-finals. India vs Pakistan Live Score ICC T20 World Cup 2021: Get full details on when and where to watch IND vs PAK Live Streaming Hotstar and TV Telecast on Star Sports.

Kohli, who steps down as India T20 skipper at the end of the World Cup, described Pakistan as being "very strong".

He also shrugged off the significance of his side's dominance.

"These things create distractions. What matters is how we prepare and execute on any particular day, regardless of the opposition," he said.

"You have to play your best cricket against them, because they have lots of talent and players who can change the game."

India, who bowed out of the semi-finals in the previous edition in 2016, outplayed England and Australia in their two warm-up matches in Dubai with top batsmen KL Rahul and Rohit Sharma scoring half-centuries.

The pace attack led by Bhuvneshwar Kumar and Jasprit Bumrah is looking good and premier spinner Ravichandran Ashwin got Australia's David Warner and Mitchell Marsh off successive deliveries in their last tune-up.

Kohli backed his team's match winners including Hardik Pandya to come good in the tournament despite the all-rounder struggling with his bowling.

"He is getting better in terms of getting prepared to bowl two overs for us," said Kohli.

Despite the anticipation ahead of the game, the political soundtrack is also playing in the background.

During the week, there were protests in India with calls to boycott the match in the wake of recent killings of 11 migrant workers and minority Hindus and Sikhs in Indian-administered Kashmir.