India Under-19 Vs Zimbabwe Under-19 LIVE SCORE (odi)

India Under-19 beat Zimbabwe Under-19 by 10 wickets

India Under-19 beat Zimbabwe Under-19 by 10 wickets 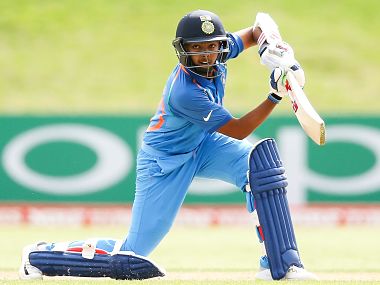 So, that's that. All ends as expected, no funny business in Group B with India and Australia qualifying for the knockouts, while for the young boys from PNG and Zimbabwe will enter the plate competition, fighting for spots between 8 and 16.

After three dominating performances India's reputation from strong favourites has accentuated to overwhelming favourites. Today, they experimented with the team, bringing in couple of new faces into the side and then giving Harvik Desai the opportunity to open the innings and promoting middle-order batsman Shubman Gill as well. Both passed with flying colours to maintain 100 per cent rercord in group stages.

So we have a week before the quarter-final tie against Bangladesh, do join us for the match on the 26 January. It will be a 3 am start in India, but fret not as we promise to be here, providing all the live updates and much more. Until then, its goodbye.

India U19 today becomes the only second side after England U19 (in 2008) to win successive #U19CWC games by a margin of 10 wickets!#IndvZim#FutureStars

Prithvi Shaw, Indian captain: Shubman and Harvik doing a great job for us. Attitude, intensity really matters for us, because of these two things we are doing well. Yes, we are playing Bangladesh. We do have some time for good rest and some practice for the quarter finals.

Liam Roche, Zimbabwe captain: It was a team decision to bat first. It was a very good batting wicket  but sadly we didn't bat well. We enjoyed the conditions; not too different from Zimbabwe. It was a learning curve to play against India, credit to their openers, they batted very well.

Shubman Gill (Man of the Match): It was a pretty good wicket to bat on. We capitalised on the start we got. He (Rahul Dravid) just told us to go out and play and be impressive. It is always good to bat with (Harvik) Desai.

India win by 10 wickets! Gill with the winning shot. He finishes off with another high-quality shot down the ground. India top Group B.

Another fantastic performance by this young Indian outfit. Were rated as favourites going into the tournament have played just like them.

Gill finishes with an unbeaten 90 off 59 balls against his name, Desai provided the perfect foil with a steady 56.

Couple of boundaries, the first, was a full-blooded wallop down the ground off Gill's blade, while the second came off the outside edge off Desai's willow, that just about managed to evade the grasp of wicket-keeper Dollar.

India win by 10 wickets! Gill with the winning shot. He finishes off with another high-quality shot down the ground. India top Group B.

Another fantastic performance by this young Indian outfit. Were rated as favourites going into the tournament have played just like them.

Gill finishes with an unbeaten 90 off 59 balls against his name, Desai provided the perfect foil with a steady 56.

FIFTY! Desai brings up his fifty, made most of the opportunity he received in this match. Some good looking shots in his innings.

FIFTY! Spectacular shot to get to the landmark! A short arm jab to a short-pitched delivery by Gill. Tonks it over mid-wicket, to execute such a shot requires some serious talent and Gill has played it nonchalantly. Half-century for Shubman Gill, his second in the tournament.

All OUT! That's it. Anukul bowls Nungu who attempts a wild swing without getting to the pitch of the ball. Zimbabwe are all out for 154.

OUT! Arshdeep strikes. Inswinging yorker pinges Harrison's boot and Zimbabwe are nine down.

OUT! Nenhuzi attempts a needless reverse-sweep and is hit plumb. Poor shot selection.

OUT! Lovely loop and change of pace. Entices Frost and gets him stumped,

OUT! Anukul gets Roche with a slider. The skipper was looking good, but Anukul has been bowling with lot of guile over the past few overs. This was slightly quicker too. That's Anukul's third wicket, and it's time for drinks.

OUT! And he's gone. Chiminya goes for a duck. Misses the straight ball after going on the backfoot to defend, and Anukul has two in this over.

OUT! Six and out! Lovely bowling. Anukul held this back a bit and drew Shumba out on the defence. This turned past his outside edge and Desai completes the stumping.

OUT! Parag gets Madhevere. Full and outside off, and he tries to run it to third-man half-heartedly. Ends up running it back on to his stumps. Liam Roche is in.

OUT! Arshdeep goes around the wicket to Myers who simply spoons a catch to Shaw at mid-off. What a waste!

OUT! Mavi gets the first one. A bit of inward movement and the ball takes Dollar's off-stump through the gap between bat and pad.

Preview: India have made an impressive start to the tournament so far with two wins from two games. Their main concern ahead of their final group fixture against Zimbabwe is the fitness of right-arm quick Ishan Porel, who injured his foot during the victory against Australia.

Zimbabwe come into the match knowing that only a win will be good enough to qualify for the last eight, and even then they may still fail to do so if Australia beat Papua New Guinea in the other Group B fixture. Indian U-19 skipper Prithvi Shaw is in good form with consecutive half-centuries in both the games so far. Image courtesy: ICC

India are yet to break a sweat in the tournament, opening with a 100-run victory over Australia and following that up with a comprehensive 10-wicket reversal of PNG to confirm their qualification for the quarter-finals. On current form, they will be hard to stop.

Zimbabwe have had mixed fortunes. They opened their account with thumping 10-wicket victory over PNG in a rain-shortened match but were then outclassed by Australia, losing by seven wickets and taking a dent to their net run rate in the process – something that could prove crucial in the shake-up for quarter-final qualification.

India's captain has lead his team from the front with scores of 94 and 57 not out so far in the tournament. A right-hand opener, Shaw has drawn comparisons with Sachin Tendulkar after starting his first-class career with five centuries from nine games. He will be the dangerman for Zimbabwe.

A left-hand top-order batsman who can bowl slow left-arm orthodox, Shumba took three wickets and scored 45 runs in Zimbabwe’s warm-up loss to New Zealand. He wasn't required to bat in the first game against Papua New Guinea but took two wickets. Against Australia the 17-year-old only mustered 16 runs but this could be his chance to shine on the big stage.

The two teams have met just once previously at the ICC U19 CWC, in 2012, the year India won their third tournament. Zimbabwe lost by 63 runs to a side that included Player of the Tournament, Unmukt Chand. The three other U19 games the two countries have played have also been one-sided, with India winning all of them.

India won their first title in 2000, with Yuvraj Singh claiming the Player of the Tournament award, a feat he would emulate for the senior side in 2011 as India won the ICC World Cup. The 2004 Player of the Tournament also came from India, though the Shikhar Dhawan-inspired side lost to Pakistan in the final. The 2008 side, captained by one Virat Kohli, also claimed the title, and India added a third triumph in 2012. In 2016 they came desperately close to securing a record-breaking fourth trophy, but were beaten by West Indies in a last-over thriller.

Zimbabwe have appeared at all 10 tournaments since 1998, with a best finish of sixth in 2004. They finished 10th at the most recent competition in 2016. Some notable individual performers include Mluleki Nkala in the 1998 edition, who was the joint-leading wicket-taker, Tinashe Panyangara, who took the second-best figures in the tournament’s history in 2004 – 6/31 as Australia were bundled out for 73 – and Tatenda Taibu, who was Player of the Series in 2002 for his run scoring, wicket taking, and, when he wasn’t bowling, wicket-keeping feats.

Rainfall and heavy winds are expected at the Bay Oval in Mount Maunganui.

In a rain-affected final ODI, India scored 225 for 3 in 36 overs, courtesy Gill's career-best knock and another half-century from skipper Shikhar Dhawan (58 off 74 balls)

India vs West Indies: Arshdeep Singh is outstanding, he will be future world no.1 in T20Is, says K Srikkanth

Arshdeep Singh is presently with the Indian team that is touring West Indies and has picked up four wickets in the three T20Is that he has played.