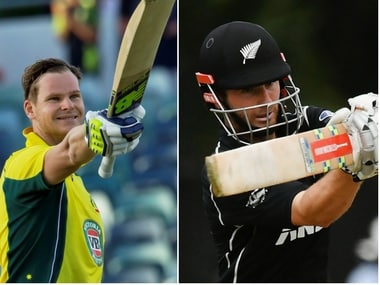 That's it from us today. Do join us for tomorrow's clash. South Africa take on Sri Lanka at 3pm. For now, its Ta-ta.

Match has been abandoned due to rain. Both Australi and New Zealand will share the points.

If we are for a 20 over match which is a minimum requirement for a result then Australia have to score 174 runs from their 20 overs according to DLS method.

Moises Henriques has scored only 64 runs from nine innings in his ODI career at an average of 8.00. Will Australia persist with him in their next match or bring in Chris Lynn?

Adam Milne has done the star turn for New Zealand here. One wondered if his pace would make it easy for the Aussies to play him but he has varied his length superbly. In fact, all the Kiwi pacers have pitched it short to exploit the bounce in this track. The rain break at the end of their innings would have given them enough time to ponder a strategy. Now they have some more to think about, if the match resumes. 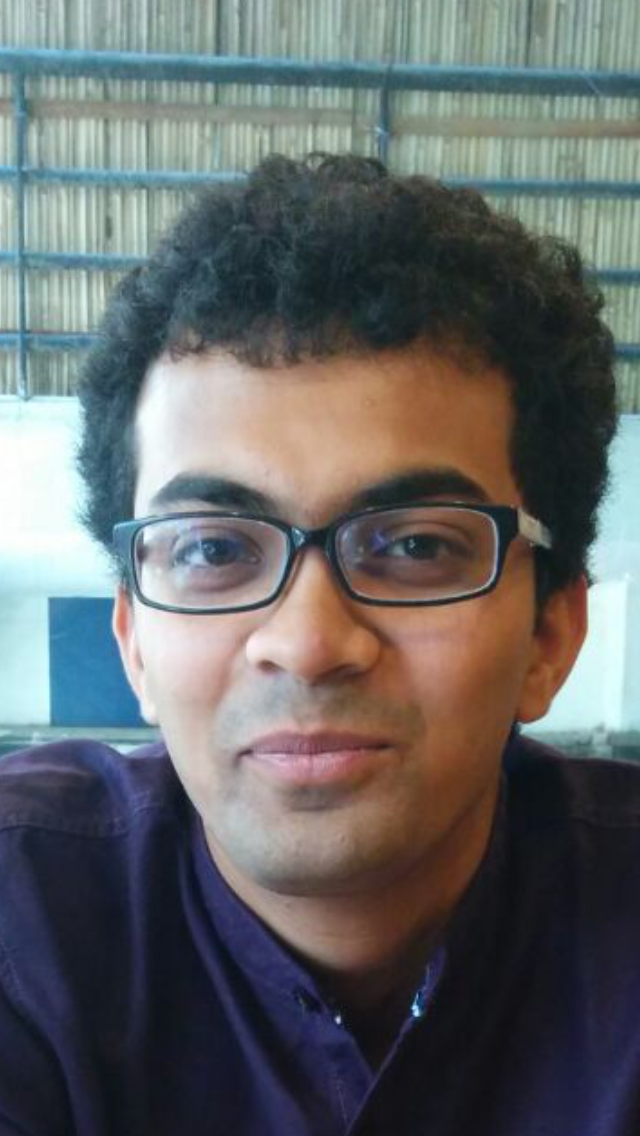 Australia are behind the DLS score but New Zealand need to bowl at least 20 overs to constitute this as a game.

Bad news: It has started pouring and the match has been halted. The players are walking off and this time it seems unlikely that the game will resume.

OUT! Australia have lost their wicket. Moises Henriques inside edges his flick onto the pads. Milne accepts the return catch gleefully.

OUT! Australia have lost their wicket. Moises Henriques inside edges his flick onto the pads. Milne accepts the return catch gleefully.

OUT! Milne bowls a length ball around off, Finch whips it straight to Ross Taylor at mid-wicket.

OUT! Boult draws first blood. Boult bowls a length ball, outside off, Warner comes down the ground looking to go over covers but only manages a thick edge which goes to Ronchi. The stumper catches it comfortably. Steven Smith walks out at the centre on his birthday.

It has started raining again at Edgbaston and the covers are back on.

OUT! Sixth wicket for Josh Hazlewood, what a fantastic outing for him. He bowls the fourth stump line and Boult edges it to Wade. New Zealand are all out for 291. They were 254/3 at one stage and will be disappointed with this effort.

OUT! Milne pulls one straight to Maxwell off Hazlewood. The Aussie fielder reverse cups it at deep mid-wicket.

OUT! New Zealand falling apart! Neesham stands and looks to go over long on but instead hits it straight to Warner who is at that position.

OUT! New Zealand are losing their way in a pursuit of quick runs. Cummins bowls it full and outside off, Anderson looks to go over covers but it takes the top edge and Henriques positions himself well at backward point to pouch the skier.

OUT! Josh comes into the attack and strikes straightaway. Broom looks to get under a full delivery and heave it over mid-wicket but in the process he holes out to Glenn Maxwell at deep mid-wicket.

OUT! Williamson departs for 100. The Kiwi captain taps one towards backward point and Broom asks his captain for a single. Kane is reluctant at first but then sets off. The backward point fielder hurls a throw towards Cummins who runs Williams out. The umpire takes it upstairs and replays suggest that he was short of his crease.

CENTURY! Kane Williamson pushes a length ball towards covers for a single to get to the milestone. Early on, he played the anchor role but then as he got settled he changed gears to make up for the dot balls. Top innings! This is 9th ton and 1st against arch rivals Australia.

OUT! The slower ball does the trick for Hastings. He bowls it on a length and around off, Taylor looks to slog it over mid-wicket but only manages a leading edge The ball goes to Moises Henriques at mid off. Australia get the much needed breakthrough. Neil Broom saunters out at the centre after Taylor's dismissal.

OUT! Australia get the much needed breakthrough and Hastings provides it. Ronchi cuts one straight to Maxwell at point. He has played an important innings and can walk back happily. Ross Taylor is the new man in.

FIFTY! Luke Ronchi looks to go over mid off but it takes the outside edge and races to the third man fence for a boundary. His innings has been of high risk but it has paved off.

50-run stand comes up between Luke Ronchi and Kane Williamson.

One bowler can bowl 10 overs, while a maximum of nine overs for all other bowlers.

Rain stops play: Bad news folks, it is raining at Birmingham and the umpires have decided to stop the play. Players are walking off the field and the covers are coming on.  After 9.3 overs, New Zealand are 67 at the loss of one wicket.

OUT! Hazlewood gets rid of the dangerous looking Martin Guptill. He angles in a good length delivery which grips a bit as Guptill looks to flick it away but it takes a leading edge and goes to Maxwell at point. He won't drop those.

Toss: New Zealand have won the toss and opted to bat.

Latest update: Taylor and Williamson have forged a brilliant partnership without taking any risks. Australia desperately need a wicket and Steven Smith goes to his strike bowler Mitchell Starc. After the first three balls, Starc goes around the wicket and bowls a dot ball. FOUR! Taylor flicks one through mid-wicket and Hazlewood, the fielder at that position, runs after it. But just as he stops it, his body comes in contact with the boundary ropes. All the effort goes in vain. Nothing going in Australia's way right now.

Preview: Ross Taylor is matter-of-fact when he reviews his career and previews New Zealand's Champions Trophy hopes: is this the year he adds a world title to his list of credentials?

The elder statesman of New Zealand cricket, known for poking out his tongue on reaching a century, has stamped his mark on the game over 11 illustrious years at the top.

Taylor has stroked a New Zealand record 17 one-day centuries, is one behind the country's Test best with 16, and with no plans to retire before the 2019 World Cup he has the New Zealand records for the most runs in both formats firmly in his sights. But his status as one of New Zealand's greats does not count as much as team records for Taylor who lists "any time it's a world tournament" as his cricket priority.

Leaving a legacy of being second is not something the 33-year-old wants.

In 87 years of international cricket since New Zealand played their first Test in 1930, the only tournament they have won was when they beat India in the 2000 Champions Trophy final.

Since Taylor joined the side six years later the trophy cabinet has been bare, he notes, when asked to name his career highlights ahead of his fourth Champions Trophy tournament in England and Wales.

"Beating Australia 3-0 in the Chappell-Hadlee in 2007, the last World Cup (when New Zealand made the final for the first time) was pretty special and making the final of the (2009) Champions Trophy was a highlight," he said.

Taylor senses this New Zealand side can put the runners-up tag to bed despite being only fourth in the ODI rankings behind South Africa, Australia and India and just ahead of England.

But a tough draw means they have to start strongly, he said.

"The players have played together for so long now we know each other so well. Our depth is probably our strength," he said, comparing the 2017 squad to teams past.

"But we need to start well. We have two hard matches straight up against Australia and England and if we don't start well the tournament's over."

And if this tournament doesn't work out then Taylor said his next target was the 2019 World Cup "and after that, we'll see."

The right-handed number four batsman has come a long way since his debut when he was run out for 15 in an ODI against the West Indies in 2006.

He did not make the 2006 Champions Trophy side but was included as cover under the title of "assistant manager" and featured in the record books for running out Umar Gul when on the field as 12th man in a pool game against Pakistan.

Back home a month later he belted an unbeaten 128 against Sri Lanka and he has been a permanent member of the New Zealand side ever since.

As for poking out his tongue on reaching 100, that is done at the request of his daughter Mackenzie.

Although only five, Mackenzie is a knowledgeable critic of her father and when Taylor was recently going through a poor patch of form she told him: "Dad, I think now you should poke your tongue out if you get to 50."