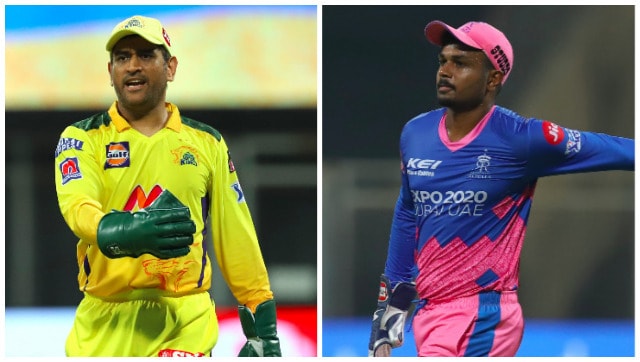 It was an excellent all-around display from Chennai Super Kings as they managed to get an impressive 45-run victory over the Rajasthan Royals. The likes of Moeen Ali and Ravindra Jadeja were particularly good, and CSK will look to turn this winning momentum into a good run for the playoffs. Do make sure to tune back in tomorrow, as we bring you all the latest updates from Mumbai Indians' match against the Sunrisers Hyderabad! Until then, goodbye and goodnight!

Chennai Super Kings captain MS Dhoni: I know it's unusual to give two bowlers three overs each in the powerplay, but I always try to see what's the best thing I can do at any given point in time, and both the bowlers then knew the conditions better than the ones coming in. A lot of times, when you keep doing something, they get quite used to the pressure of bowling in the first few over. Sam bowled very well, Deepak miscalculated a bit with the knuckle deliveries. Other than that, I'm very happy. I felt a good start was important.

Even before the ball was changed, the wet ball was spinning a bit. I wanted Jadeja to keep bowling the way he was, even though Jos was hitting the reverse sweep really well. I don't mind a reverse sweep on a wicket where it's turning and stopping a bit. I wanted him to keep bowling up. When the wet ball turns, the chances of a dry ball turning are even higher.

It's important to have that sixth bowler in Moeen Ali. It's not something you need to have, but it always helps. It was good to have him, it was turning and stopping, but there was less dew than usual and the wicket became a bit sticky.

I felt like we should have scored a little more, so that's something we need to keep in mind.

A lot has changed since last year. The way we prepared, the way we turned up. Right from the start, it felt like a good dressing room, something we've always put an emphasis on. The bowlers have been under the pump, so they're used to the conditions a bit.

I'm getting old, so I don't know how fit I am. When you're playing, you don't want anyone to say 'oh he's unfit.' I can't guarantee performances, but as long as people don't point fingers at my level of fitness, I'll take it as a positive. I'll try to keep up with the younger guys.

Moeen Ali: The No 3 currently is the No 1 player in the world (Dawid Malan, in the England T20I side). My job here is try and score as many runs and get the team off to good starts. It’s just the way I play. I try my way around the ball. It wasn’t an easy wicket to score on. (Batting or bowling, the more pleasing?) Bit of both. The three wickets at the end, it was a fantastic time for me to come out and bowl. As a team, we played very well today. Once the left-hander came in, I thought I had a good chance. Of course, the ball that got changed was drier. It was a good wicket for both of us to bowl.

Moeen Ali is the Player of the Match for his all-round performance!

A first for Chennai

This is the first time in their history that CSK have won when batting first at the Wankhede Stadium. #IPL2021 #CSKvRR

Sanju Samson, RR skipper: I thought it was a good score to chase down, but we lost too many wickets in the middle. (Conceded too many in the end?) You can say that. Our bowlers bowled well, but their batters were batting deep. We may have given 15-20 runs extra. We never expected that. The dew didn’t come, and the ball was turning, so it was a bit shocking to see. I think it’s very important to maintain a good composure throughout the tournament. Very normal to get out often, but at the same time I keep on working on my basics. (Sakariya) He’s been doing really well. We lost the match, but there are positives.

Shardul Thakur gets to bowl the final over and Unadkat's thick edge flies over short third for a boundary on the first ball! A couple of wides follow, before Jadeja somehow takes yet another catch at sweeper. He's been just about everywhere tonight. Rajasthan Royals will need to reevaluate their batting lineup following tonight's display. Manan Vohra and Sanju Samson in particular were poor. Chennai ease to a win, and much of that is down to one Ravindra Jadeja.

Bravo's back, and he begins by giving away a single. Tewatia then tries to score a boundary with a lofted drive, and there isn't enough on it. It's just a double. Tewatia then hits a shot straight to deep midwicket, but the fielder can't help crossing the boundary rope in the midst of taking the catch, and it's a six. Tewatia hits another six in the same area, and then at his third try for a maximum, he sends it straight down Ruturaj Gaikwad's gullet at extra cover.

OUT! One shot too many from Tewatia, and it's held by Gaikwad! Rahul Tewatia c Gaikwad b Bravo 20 (15)

Moeen Ali is the Player of the Match for his all-round performance!

Shardul Thakur gets to bowl the final over and Unadkat's thick edge flies over short third for a boundary on the first ball! A couple of wides follow, before Jadeja somehow takes yet another catch at sweeper. He's been just about everywhere tonight. Rajasthan Royals will need to reevaluate their batting lineup following tonight's display. Manan Vohra and Sanju Samson in particular were poor. Chennai ease to a win, and much of that is down to one Ravindra Jadeja.

OUT! One shot too many from Tewatia, and it's held by Gaikwad! Rahul Tewatia c Gaikwad b Bravo 20 (15)

OUT! Jadeja takes another excellent catch, and this time it's Morris who falters! Chris Morris c Jadeja b Ali 0 (2)

OUT! Parag's gone, he tried to hit it for a 6 but could only find Jadeja at deep midwicket. Riyan Parag c Jadeja b Ali 3 (7)

OUT! Miller's gone! It's lbw, and Moeen Ali has his first wicket. David Miller lbw b Ali 2 (5)

OUT! Jadeja strikes again! Dube reviews it, but the umpire was spot on, and he's gone! RR 90/4

OUT! Got him, Jos Buttler's sent back to the dugout by a beautiful Ravindra Jadeja delivery! Jos Buttler b Jadeja 49 (35)

OUT! Sanju Samson is outta here! It's a slower delivery and he hits it straight to Bravo at mid-on. Sanju Samson c Bravo b Curran 1 (5)

SIX! Monster hit over long on by Bravo off Mustafizur to end the innings, as Chennai Super Kings finish on 188/9 after being asked to bat by Rajasthan Royals!

OUT! Thakur charges towards the striker's end, with Bravo not so much as moving a muscle resulting in an easy run out at the non-striker's end. CSK 180/9

OUT! Curran's not quick enough to get back to the striker's end while calling for a risky second run. Samson whips the bails off to catch him well short. Big blow for Chennai, given he was hitting the ball really well a couple of overs ago. CSK 174/8

OUT! Morris strikes right after getting hit for a boundary, this time bowling an even shorter ball that Jadeja ends up nicking to the keeper while looking for a hook towards midwicket. Second wicket for the South African all-rounder. CSK 163/7

OUT! The change of pace does the job for Rajasthan once again, as Dhoni ends up getting a leading edge off a one-handed slog that results in a simple catch for Buttler at extra cover. Third wicket for the young left-arm seamer! CSK 147/6

OUT! Raina departs not too long after Rayudu, driving the ball straight into the hands of Morris at mid off. Was a well-struck shot, but unfortunately straight into the fielder's hands. Sakariya's struck twice in a space of three balls, getting rid of two batsmen. CSK 125/5

OUT! He may not quite have performed with the ball, but Parag at the boundary is turning out to be quite the safe bet for the Royals. Takes his third catch of this innings, this time dismissing Rayudu who didn't quite get the distance while looking to clear sweeper cover. CSK 123/4

OUT! Tewatia strikes, getting the key wicket of Moeen as England all-rounder fails to pick the googly. Ends up with a miscued slog towards deep midwicket, where Riyan Parag holds on for his second catch of the innings. CSK 78/3

OUT! Morris gets his compatriot du Plessis as Rajasthan get rid of the man who was starting to look real dangerous! Du Plessis starts inching forward, leading to Morris bowling this full and well outside off. Catches the toe end of Faf's blade, and fails to travel the distance, resulting in a simple catch for Parag at sweeper cover. CSK 45/2

OUT! Mustafizur draws first blood for the Royals, using the slower ball to good effect as Gaikwad gets a thick leading edge while looking to target the boundary. Results in the simplest of chances for Shivam Dube at mid off. CSK 25/1

The two teams had occupied the last two slots in the points table last season, with CSK (7th) failing to qualify for the IPL playoffs for the first time in the history of the league. This season, the start has been a mixed one for both camps with a victory and a defeat each.

Rajasthan began the season with a heart-breaking loss to Punjab Kings, in which newly-appointed captain Sanju Samson nearly guided the team home with a magnificent 119 in a difficult 222-run chase, almost pulling off an encore of their famous triumph at Sharjah against the same opponents last year. Their next game however, saw several more members making winning contributions, as Jaydev Unadkat's superb figures of 4/13 along with the batting contributions of David Miller (62) and Chris Morris (36 not out) helped them win a thriller against Delhi Capitals.

Like Rajasthan, Chennai began the campaign with a defeat as they barely had any answer to the combined brilliance of Delhi openers Shikhar Dhawan (85*) and Prithvi Shaw (72) — who made the 189-run chase appear a walk in the park. It was their bowling unit however, that was at its clinical best in their next game against Punjab, restricting KL Rahul's side to a modest 106/8 that was easily overhauled by the three-time champions.