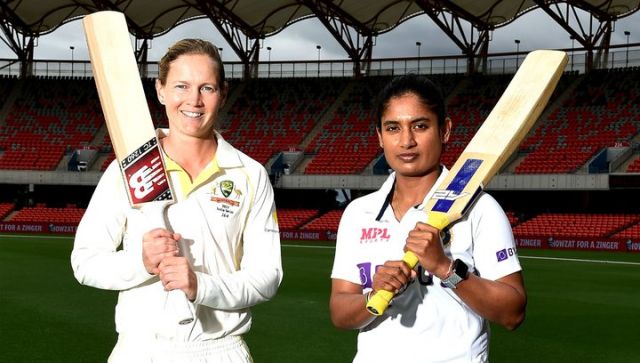 That brings us to the end of our coverage of the opening day's play in the pink-ball Test between Australia and India at the Metricon Stadium in Gold Coast. Smriti Mandhana's fireworks with the bat from the word go after Meg Lanning's decision to bowl ensures India's journey in pink-ball Test cricket starts off on a strong note, with the top three collecting 132 runs for the loss of just one wicket, Mandhana alone accounting for 80 of those.

Do join us tomorrow at 9 am for the start of our coverage of the second day's play, which will begin 30 minutes earlier than scheduled at 9.30 am. Till then, it's a goodbye from us!

An update from Cricket Australia confirms stumps has been called on the opening day of the landmark pink-ball Test between Australia and India at the Metricon Stadium in Gold Coast.

Team India head to the interval on a solid position, with Smriti Mandhana's unbeaten 80 along with starts from Shafali Verma (31) and Punam Raut (16*) guiding them to 132/1 at close of play.

Australia will perhaps be wondering if their decision to bowl first was indeed the best one after all, though they still can turn things around come Friday.

The frustrating wait for resumption of play continues. Meanwhile, the match officials have until 5.30 pm IST (10 pm local time) to decide on the resumption of play. Beyond that, it should be stumps on the opening day.

Play was supposed to have resumed by now. But it looks like the holdup will be for a little while longer.

Live visuals from the broadcaster showing Smriti Mandhana, who's unbeaten on 80, having taken her pads off while sitting with her teammates in the dugout.

UPDATE: Tea will be taken at 8pm (five minutes time). Play will resume if possible at 8:20pm #AUSvIND

Players to hit a six in Women's Test cricket against Australia in Australia:-

Just one delivery is bowled in the 45th over of the innings before the players rush back to the dressing rooms, with covers quickly being brought out. Looks like a passing shower, and play shouldn't be held up for long

Annabel Sutherland brought in place of Tahlia McGrath now in the first bowling change after resumption of play. She starts off with a maiden with Mandhana remaining defensive in this over.

OUT! Sophie Molineux finally breaks the stand as Shafali Verma's luck runs out. Gets a thick top-edge while looking for a slog, as McGrath runs forward from long off to complete an easy grab. IND 93/1

Australia Women Vs India Women, pink-ball Test Live Cricket Score Updates: Follow this space for the latest update on the opening day of the one-off pink-ball Test between Australia and India.

One-off Test Preview: India gear up for a historic first on Thursday when they take on a formidable Australian team in their own backyard in what will be their maiden appearance in a day-night Test.

The Indian team had only recently played their first Test in seven years when they toured England earlier this summer, the likes of Shafali Verma and Sneh Rana producing standout performances with the bat to help the visiting team earn a hard-fought draw against the Heather Knight-led team in Bristol.

A little over two months later, the team will be up for a fresh challenge — facing the pink ball under lights on the greenish surface at Gold Coast's Metricon Stadium against a team whose status as the number one team across formats has rarely been challenged in recent years, much less so on their own turf. What India will seek inspiration from, however, is the fight they produced in the one-day international series against Meg Lanning and company. After getting outplayed by nine wickets in the series opener, Mithali Raj's side produced an admirable fightback in the next two games, taking the fight till the very last over on both occasions.

While they suffered a last-ball heartbreak in the second one-dayer that saw a plenty of drama occurring over a waist-high no-ball from Jhulan Goswami, the Indians fought back hard in the final ODI to not only collect their first points of the multi-format tour, but end the Aussies' 26-match winning streak in the 50-over format that had stretched all the way back to October 2017.

On the eve of the landmark match, which will also be the first time India and Australia face each other in a women's Test since 2006, we bring to you everything you need to know as far as the match's live coverage is concerned:

When will the day-night Test between Australia and India take place?

The one-off day-night Test between Australia and India will take place between Thursday, 30 September and Sunday, 3 October.

Where will the day-night Test between Australia and India be played?

The day-night Test between Australia and India will be played at the Metricon Stadium, Gold Coast, Queensland.

What time will the match begin?

The day-night Test between Australia and India will begin at 11.30 am IST. The toss will take place at 11 am IST on the opening day.

The day-night Test between Australia and India will be telecast on SONY SIX & SONY SIX HD. The match will also be live-streamed on SONY LIV. You can also catch the live updates on firstpost.com.