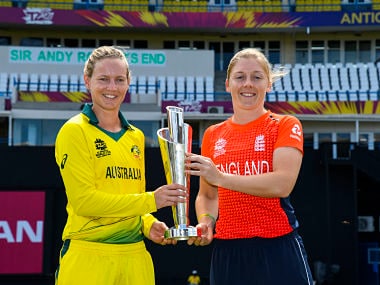 The final of the tournament did not live up to the hype and you have Australians to blame here who showed why they are a difficult team to beat in the tournament. With the bat and ball, they were at the top of their game.

England, like India in the semis, did not look like winning this one from the start. Kept on losing wickets at regular intervals, played rash shots. With the ball as well, they looked average, and dew did not help their cause either.

Australia have lifted the trophy for the record fourth time.

If you are an Indian fan reading this, rejoice by the fact that Australia, the World T20 champions, lost just one match in this tournament and that was against Harmanpreet and Kaur. India could reach just semis but they have a lot of positives to take back home from this tournament.

From all of us here - Amit Banerjee, Vaibhav Shah, Ujwal Singh, Shantanu Srivastava, Jigar Mehta and Shubham Pandey, a big thank you to all of you for staying with us throughout the tournament.

Don't forget that we will be LIVE blogging the India vs Australia's 3rd T20I which starts in a few hours. You can catch the latest score and updates there from the match.

Meg Lanning, Australia captain: We did not have the best day in the field. Bowlers did a good job. We made sure we learnt from the last few disappointments. It showed tonight. It is a satisfying win. The loss to India did not not affect us. We knew we lost to a good side. The girls who did not play in the tournament were great support. The whole support staff was amazing. Thanks to the Australian fans who came to support here.

Player to the series award in each edition of WWT20:

Heather Knight, England captain: I thought Wyatt started brilliantly. Weren’t able to post a total that was competitive. We thought it would skid on a little more than it did in the semi-final. Really proud of the girls for making another final. Obviously, Australia were the better team. We came over with a lot of inexperience, and a lot of the girls stepped up brilliantly. Sophie Ecclestone has stepped up. Kirstie Gordon has been a real find. (On crowd, including Barmy Army) They have been a real source of support. We’ll take some time and reflect. We’ve got a massive year next with the Ashes.

Player of the tournament is Alyssa Healy

Healy: Just proud of the effort today. I am just enjoying the freedom at top of the order. I knew it (opening the innings)  will come off eventually and happy that it has come off in last 6 weeks. We worked really hard to build this culture. It is pretty special. 2010 World Cup here in Caribbean is still my favourite. Crowd comes out to support which is amazing.

Player of the match in Women's WT20 finals:

Ashleigh Gardner is the Player of the Final for her all-round performance!

Gardner: There was obviously a lot of nerves. But we had a lot of confidence coming into this game. I don't think I had to stray too far away from my stock ball. I had been there for enough balls, and as soon as it was tossed up, I thought: "This is the one".

Megan Schutt: Pretty happy. Trying to hold back tears. So thanks for asking. (On crowd) Pretty hard to hear Meg out there, so it’s a pretty good distraction. I love noise.

Beth Mooney: We’re done really well this whole tournament. Ash came out and absolutely whacked it, so it was awesome to watch. We (batting unit) complement each other really well. So we’re in a pretty good place. It’s been an amazing journey for Australian journey.

Ellyse Perry: Really special. This has been long 24 months. Has been a wonderful tournament. Had a great time. Hopefully will inspire young boys and girls back home. (On turnaround post-2016) I don’t think it’s been tough at all. It’s been a huge pleasure to take this challenge. We’re all good friends, and its pretty easy to enjoy in the West Indies.

Alyssa Healy: Im just enjoying this group, and expressing myself with the bat. The batting lineup we have at the moment is unbelievable.

Ashleigh Gardner is the Player of the Final for her all-round performance!

Gardner: There was obviously a lot of nerves. But we had a lot of confidence coming into this game. I don't think I had to stray too far away from my stock ball. I had been there for enough balls, and as soon as it was tossed up, I thought: "This is the one".

Australia win, will be lifting their fourth Women's T20 World Cup trophy. Lanning tapped it into the off side and ran the single to creat history. The team is into a huddle and England players are down on the ground, the feeling of defeat will take some time to go away. Australians over the moon right now.

Fifty up for Australia but spinners doing the good job for England as well. Knight keeping her fielders busy with changes. Usually a calm captain, she has looked animated today and why not, this is a big match. Dew too playing its part here and Knight has been using the towel to good use.

OUT! That's the end of Mooney as she edges this one from Hazell into the hands of keeper Jones. Australia lose their second wicket. Beth Mooney c Jones b Hazell 14(15)

OUT! Healy gone. She loses her off and middle stump, trying to place the delivery which was angling into her towards point region. Ecclestone picks the wicket. Alyssa Healy b Ecclestone 22(20)

OUT! England have been bowled out for a modest 105!

Schutt collects the last wicket, trapping Hazell lbw with the batting side out of reviews at this stage! Australia will head back to the dug out on a high, given their disciplined performance with the ball this evening.

OUT! Ecclestone perishes while trying to come back for a risky second run, all the more so due to Perry's strong and accurate throw; ENG 104/9

OUT! Knight departs right after collecting a six, as she gets a thick leading edge while looking for another big hit, getting caught by Wareham at mid off. ENG 98/8

SIX! A much-needed confidence booster for England, as Knight shuffles forward and smacks the ball over long on, putting it just over Mooney's outstretched hands! ENG 98/7

OUT! If Australia have been poor on the field, England have certainly been worse with the bat. Shrubsole departs after failing to get the distance while going for a slog towards deep midwicket. Perry, who had fluffed a chance two balls earlier, doesn't mess up on this occasion. ENG 84/7

OUT! Wareham's on a hat-trick! First a superb review, and now Wareham gets rid of Sophia Dunkley Brown with a superb delivery — a skidder that beats her defence completely to rattle her leg stump. England crumbling now! ENG 74/6

OUT! Wareham gets her second, as she traps Winfield lbw to collect her second wicket! Was a muted appeal initially, one that was turned down initially, given that there was a faint deflection off the pad as the batter went for a cut shot. Replays show three reds, with the ball hitting bang in the middle. ENG 74/5

OUT! Australia get rid of Wyatt before the latter could convert the start into a big score this evening! Wyatt looks to smack a flighted delivery from Gardner, but does so straight in the direction of the Australian captain at extra cover. ENG 64/4

OUT! Perry strikes again! Traps the in-form Sciver LBW with a yorker, although the latter reviews it right away. Unfortunately for the batter, the ball's hitting middle and leg, as she has to make the slow walk back to the dug out. And with that, Ellyse Perry becomes the second female cricketer to complete 100 T20I wickets! ENG 41/3

OUT! Schutt draws first blood, as Beaumont skies the ball towards Villani at mid off. Australia finally make it count when the opportunity presents itself after a couple of missed chances in the earlier overs. ENG 18/1

Both teams are unchanged for the final.

Australia vs England, Final, Live Score and Latest Updates: Australia win, will be lifting their fourth Women's T20 World Cup trophy. Lanning tapped it into the off side and ran the single to creat history. The team is into a huddle and England players are down on the ground, the feeling of defeat will take some time to go away. Australians over the moon right now.

The ICC Women's World T20 final between Australia and England is being telecast on Star Sports 1 and 1 HD, Hindi 1 and Hindi 1 HD. The Australia-England live streaming will take place on Hotstar.

Preview: As the final of the first standalone Women's World T20 approaches us, one has to admit that these two teams - Australia and England - despite being the top conteders to lift the title, were not the best two teams in the tournament. To put it in a different perspective, these two were the two best teams who know how to win at the big stages on these tournaments.

For Australia, who lost in the finals of the last edition, this is yet another opportunity to claim their fourth title. They looked ordinary against the last group game against India but the way they bounced back in the semi-finals reflects on their taking-nothing-for-granted attitude. The beat Windies all ends up in the semis to qualify for the semis.

England looked a little rusty in the tournament and despite that they made it to the semis, where they showed their best performance of the tournament, beating India by a whopping 8 wickets.

Both the teams won a one-sided contest in the last match, and the secret to do so was playing as per the nature of the pitch. In the finals, a different wicket will be used but one never knows if it will behave different or not.

The motto yet again should be too assess the pitch and play accordingly.