From Kohli to Sehwag, assembling a 16-member dream India Test squad of the decade just gone by

Cricket, as a game, despite its rules being tinkered with every now and again, lends itself nicely to the conceptualisation of fantasy games and dream teams by its fans and admirers. Imagine, for example, a match where the well-built Mohammad Nissar was partnered with Kapil Dev, and where first change would either be Javagal Srinath or Jasprit Bumrah.

Imagine this: The well-built Mohammad Nissar galloping in to bowl on a wintry morning in Kolkata, at the Eden Gardens. Partnering him with the new ball — and his mop of curly hair and drooping mustaches — is Kapil Dev Nikhanj. First change would either be Javagal Srinath or Jasprit Bumrah. The occasion, a Test match between an all-time great Indian XI and Don Bradman’s ‘invincibles’ of 1948 – a fantasy game, a potential classic, if ever there was one. Oh, what a wonderful sight it would be!

Now imagine this: The ultimate stylist Sunil Gavaskar taking first strike with Virender Sehwag — humming Bollywood melodies at the other end — as Ray Lindwall prepares to send down his ‘thunderbolts’. Relaxed, with a half-smile on his face, Vijay Hazare sits in the pavilion, padded up to come in next, with Sachin Tendulkar and Virat Kohli – to follow – trying to convince the veteran to wear a helmet.

On a wearing track on the fourth day, Vinoo Mankad – slated to bat at number six – will bowl in tandem with either Bhagwat Chandrasekhar or Ravichandran Ashwin. Their flight, turn and bounce is expected to cause problems for the strong, unbeatable Aussie batting lineup. A match up that’s not possible in real life, but an enjoyable reverie just the same. 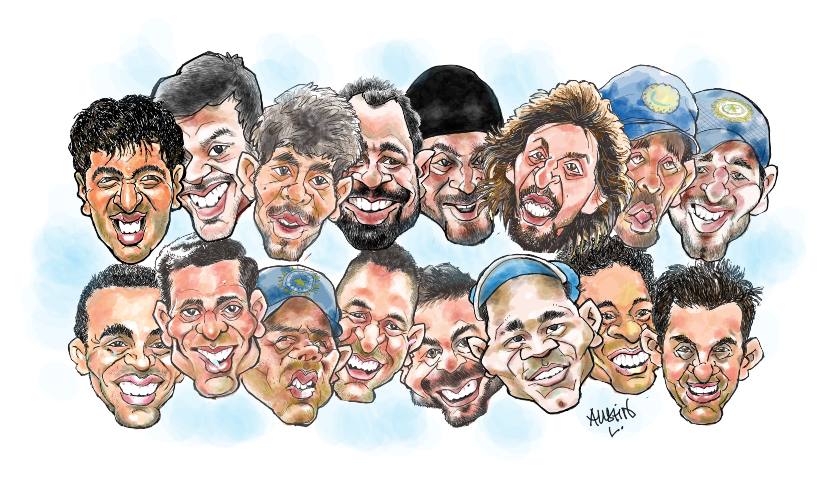 Cricket, as a game, despite its rules being tinkered with every now and again, lends itself nicely to the conceptualisation of fantasy games and dream teams. Illustration courtesy Austin Coutinho

In the 80s, in the midst of an Australia-Pakistan series, Pak skipper Imran Khan is said to have told Allan Border that if he had a Gavaskar and a Chandrasekhar in his side, he would beat the Australians hands down. Fantasy, of course, but the Australian skipper wasn’t to be outdone. He said, “Give me two of your umpires and I can beat any team in the world!” This is said to have caused an uproar, and Border had to apologise for his remark.

Cricket, as a game, despite its rules being tinkered with every now and again, lends itself nicely to the conceptualisation of fantasy games and dream teams by its fans and admirers. As an adolescent in the mid-60s, I often wondered if the miserly Bapu Nadkarni would have tied down a prolific stroke-player like Bradman, or if ‘Panther’ Borde would have faced ‘Lol’ Larwood (Lol was his nickname and those who faced his deadly deliveries dared not laugh at him) with the ease with which he batted against Wes Hall and Charlie Griffith.

Those were the years when India, despite some exceptionally talented players and the charismatic Tiger Pataudi as skipper, hardly won Test matches. As solace for my soul, and those of my close friends, I would thus script and illustrate comic books that portrayed India doing well in cricket. One of those comic books had a certain Sunil Gavaskar scoring a few hundreds, and even a triple hundred against the West Indies, a good four years before he made his Test debut and scored those historic 774 runs in the Caribbean Isles. Others who were a part of that comic book were the Amarnath brothers and Syed Kirmani, who later played for India. A close friend who left India in the mid-70s once told me that he had preserved some of those comics which, as memories, would now be worth their weight in gold for me.

My journey of cricket’s fantasies has continued over the last 40 years, with editors of newspapers, magazines and websites asking me to draw ‘dream XIs’ and fantasy teams, in caricature form, for their publications. A very creative sports editor – a dear friend – once informed me that the Indian team for a World Cup would be announced in the evening, by 8 pm. “Would it be possible for you to make a poster cover for our paper by 10 pm, with caricatures of all selected players – their names mentioned on their jerseys?” he asked. “Of course,” I remember replying. I completed the poster by 8 pm that day, and had to change only a couple of faces after the team was announced, for the picture to appear in the paper next morning.

Times have changed. Indian cricket is now on a firm footing – both in terms of talent and on the money front. Under MS Dhoni’s leadership, Team India won the T20 World Cup as well as the 50-over World Cup in the last decade-and-a-half. In Tests, there are few teams that can match India’s strength these days. In 37 Test series played over the last 10 years, 19 were played at home and 18 away. Of the former, India won 17, lost one and one series was drawn. Seven of the away series were won, three were drawn and eight were lost.

Thanks perhaps to the emergence of the IPL, India has had an abundance of talent from which to pick its teams for T20 internationals, one-day-internationals and Tests in recent years. If one were to try and pick a dream team from among those who played Tests for India between 2009 and 2019, it would not only be a tough ask but also an attempt to expose oneself to criticism from a million cricket fans.

I am sure that the supporters and fans of Shikhar Dhawan, Murali Vijay, Yuvraj Singh, Ajinkya Rahane, Ravi Jadeja, Umesh Yadav, the injury prone Bhuvneshwar Kumar, and a few others will have reasons to feel hard done by in my dream squad. Agarwal, for instance, is someone who has just played nine Tests, making his debut in 2018. Critics would believe he was dispensable and that either of the off-spinners could have been dropped. Debatable, for sure, but picking both Agarwal and Harbhajan was intuitive, which as selectors know, most often pays off. Didn’t Gavaskar pay back the trust I placed in him in the late 60s, in those comic books of mine? Just saying!

Of the future stars, I believe that Shubman Gill, Prithvi Shaw, Yashasvi Jaiswal and Rishabh Pant will be the backbone of India’s Test side in a few years’ time. I am hoping that young pacemen Kamlesh Nagarkoti and Shivam Mavi will make it to the senior squad sooner rather than later, with Kuldeep Yadav there for the mesmeric effect. With a few stars in the side and a few coming up, Indian cricket seems to be in safe hands at least for the coming decade.

Australian leg-spinner of the 20s, Arthur Mailey was like me, a writer and cartoonist, but unlike me, a wit. Asked to select a dream Australian XI by his editor once, Mailey submitted 11 names but forgot to include a wicketkeeper in that list. After newspaper readers reacted, the editor asked Mailey for an explanation. “The bowlers I selected weren’t good enough to beat the bat, so no ‘keeper was picked,” he replied.

Learning from Mailey, I have picked two wicket-keepers in my fantasy squad!