Irfan Pathan retires: From hat-trick in Karachi to historic victory at WACA, unforgettable moments in his international career

Hero of the World T20 Finals in 2007, Hat-trick against Pakistan in Karachi and more memorable moments from Irfan Pathan's international career

Armed with some exceptional ability with the ball and more than capable competence with the bat, Irfan Pathan, carved his own cult status in Indian cricket during the mid noughties.

At just 19 in 2003, Pathan burst into international cricket as a tearaway swing bowler from Baroda, who over time honed his skills with the bat under then coach Greg Chappell, so much so that it gave Indian fans the hope of a genuine fast-bowling all-rounder that they had craved for since the retirement of Kapil Dev.

And to good measure, albeit intermittently, Pathan, exhibited his brilliance as an all-rounder that charmed one and all who witnessed him at play. Now, with Pathan having announced his retirement from all forms of the sport at Firstpost we look back at some of the most memorable moments from his international career:

The hat-trick in Karachi

If Virender Sehwag's 309 during India's tour of Pakistan in 2004 earned him the tag of Multan ka Sultan, Pathan, at least for those three balls in the first over the third Test of 2006 tour, was 'King of Karachi'. After two meek draws in Lahore and Faisalabad that even threatened to make an India-Pakistan Test series a snoozefest, Pathan, as if to take matters into his own hands, woke everyone, certainly the members of the Pakistan side, out of their slumber.

On a green top, in the matter of just three deliveries of the very first over, Pathan had scripted history. In what will be remembered as one of the most breathtaking opening overs of a Test match, Pathan with his entrancing left-arm swing had Salman Butt caught, Younus Khan trapped and Mohammed Yousuf bowled off the fourth, fifth and the sixth ball of his over to become only the second Indian after Harbhajan Singh to bag a Test hat-trick. 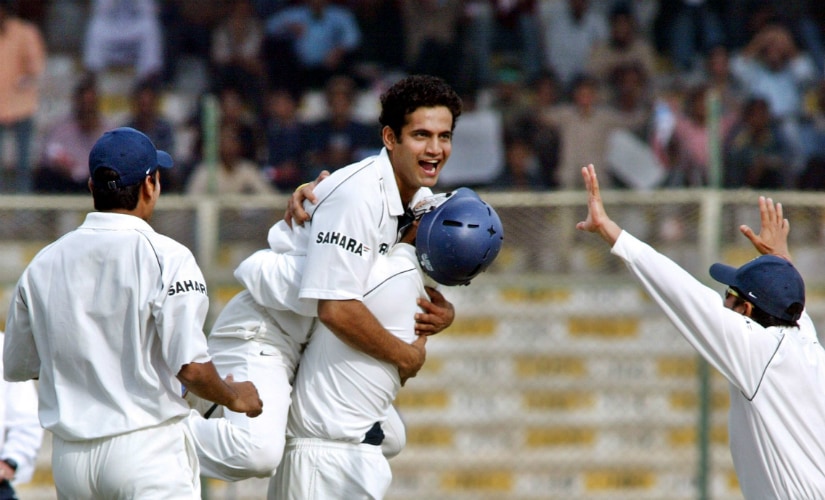 Irfan Pathan (C) celebrates with teammates after taking a hat-trick with the wicket of Pakistani batsman Mohammad Yousuf on the first day of the third and final Test against Pakistan in Karachi in 2006. AFP

After setting Pakistan a par target of 158 to win the inaugural World T20, India during their defence, struck at regular intervals in the first 10 overs, but courtesy a blazing start from opener Imran Nazir, Pakistan were very much in the contest. At the halfway mark in the second innings, match was delicately poised: Pakistan needed 88 off 60 balls with six wickets left. Captain Shoaib Malik and Misbah Ul Haq were batting and the destructive Shahid Afridi was primed to come in next.

Pathan was introduced for the first time to bowl the 10th over. He conceded just five runs from his first over. However, his second over, the 12th of the chase, the canny Pathan with his trickery induced fatal errors from Malik and Afridi off two successive deliveries – separated by a wide – thereby changing the course of the game into India's favour. He followed it up with another tidy 4-run over as Pakistan needed a steep 66 off 36 balls.

In the final over of spell, Pathan once again with his smart variation had Yasir Arafat bowled to pick his third wicket of the match. It took some incredible ball-striking from Misbah to take Pakistan inches close to World T20 glory but in the match that constantly swung it was India who triumphed to be crowned first-ever T20 Champions with Pathan being named the Player of the Final.

India were 2-0 down coming into the third Test of the 2007/08 tour of Australia. The turmoil and tensions that emerged from the preceding Sydney Test added one of the most significant chapters in the storied rivalry of India and Australia. India's pride was hurt and with Australia, closing in on 17 Test wins in a row, were on the cusp of history. The hallowed WACA known for its pace and steep bounce presented the stage for more action.

India omitted Harbhajan and in came Pathan. Anil Kumble opted to bat and India posted 330 in the first innings, batting at no. 8, Pathan contributed 28. Australia lost their openers early thanks to Pathan's swing that saw the duo dismissed in the space of three balls. Australia were two wickets down for 13 runs after four overs and were eventually bowled out for 212, giving India a healthy lead of 118 runs. 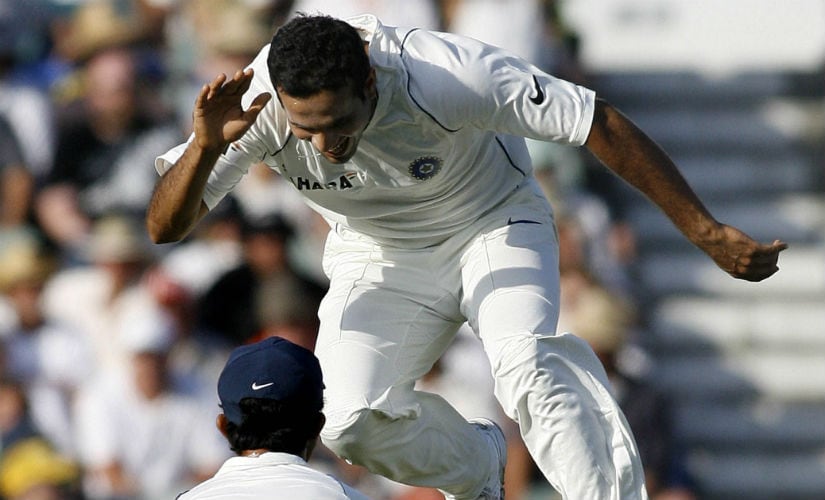 Irfan Pathan (top) celebrates the wicket of Australia's Phil Jaques during day three of the third Test against Australia in Perth in 2008. AFP

In the second essay, Pathan was asked to bat as a nightwatchman at No. 3. Not only did he fulfill his duties but he carried on batting the next morning. India lost Sehwag, Rahul Dravid, Sachin Tendulkar and Sourav Ganguly in the space of 50 balls, but Pathan weathered the storm and compiled a vital innings of 46 which helped India post a strong 413-run target for the Aussies. In the fourth innings of the match, Pathan once again had the numbers of Australian openers which helped India set up a famous win at the WACA – a venue where no Asian team had won.

ALSO READ | 'People start their career at 27-28, mine ended at that age,' laments all-rounder Irfan Pathan

Pathan was adjudged Player of the Match for all-round performance but more so for the time at which it arrived. Another  perspective of looking at Pathan's contribution with the bat is: 28 + 46 = 74 runs, result India won by 73 runs, this was of course to go with his five wickets across two innings.

Familiar foes India and Sri Lanka were up against each other in the only T20I match of India’s tour to Sri Lanka in 2008-09, where both Pathan brothers (Yusuf and Irfan) got together and pulled off an unlikely win.

While chasing Sri Lanka’s 171/4, the Indian top-order struggled their way to 115/7. With India requiring 57 to win in 29 deliveries and three wickets in hand, the Pathan brothers turned the tables. The duo plundered the Sri Lankan bowlers to all parts as India won the tie with four balls remaining.

Elder brother Yusuf smashed 22 in 10 deliveries, while Irfan hammered 33 in 16 balls to seal a thrilling win.

Ending on a high

In the fifth one-day of the India's 2012 tour of Sri Lanka, there was not much at stake as India had already clinched the series 3-1, however, no team likes to celebrate a series win after a loss.

At Pallekele MS Dhoni won the toss and elected to bat. Pathan walked into bat in the 39th over with India looking to accelerate. Captain MS Dhoni was at the other end and Pathan played his supporting role to perfection scoring a 28-ball 29 helping India finish close to the 300-run mark as he along with Dhoni took India from a tricky 213/6 to 294/7.

Pathan struck almost immediately with the new ball as he sent the dangerous Tillakaratne Dilshan packing for nought off the third ball of second over of the match. The hosts were off to a flier and to curb their surge Pathan struck again as he removed the other opener Upul Tharanga (31 off 21) in the eighth over. Sri Lanka continued to chip away.

Sri Lanka needed 45 runs from 48 balls with four wickets in hand but Pathan's penultimate over turned out to be a decisive over. First he got rid of the big-hitting Thisara Perera for 18 and then two balls later he dismissed the well-set Jeevan Mendis, who was batting on 72, tilting the game very much in India's way. Pathan capped off a sensational bowling effort by picking a five-for off the last ball of his spell. A melancholic end of sorts as it turned out to be Irfan Pathan's last ODI.