For all Lewis and Joseph's excellent work, an unbroken partnership of 77 between Moeen Ali and Jos Buttler got England above the required rate to 258 for five when rain stopped play in the 36th over.

London: West Indies captain Jason Holder was left trying to work out how his side had lost the fourth one-day international against England despite two fine solo efforts with bat and ball.

England triumphed by six runs under the Duckworth/Lewis method for rain-affected fixtures at The Oval on Wednesday in a series-clinching success that left them 3-0 up with one to play in a five-match contest. 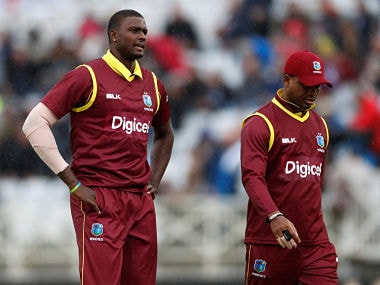 Defeat was tough on Evin Lewis who made a career-best 176 before retiring hurt, while recalled pacer Alzarri Joseph took five for 56, his maiden five-wicket haul at his level.

To make matters worse, opener Lewis will miss Friday's finale in Southampton with a hairline fracture, an injury he suffered in bizarre fashion when he deflected a Jake Ball delivery onto his right ankle.

For all Lewis and Joseph's excellent work, an unbroken sixth-wicket partnership of 77 between Moeen Ali and Jos Buttler got England above the required rate to 258 for five when rain stopped play in the 36th over.

"It's really hard to take... I thought, had the rain not come, it would have been a really close finish — and we were backing ourselves to win it," said all-rounder Holder, who made 77 as he and Lewis put on 168.

"It's hard when a guy scores 170 and another guy takes five wickets, and you end up losing the game," he added.

Holder will also be absent from the final ODI as he is set to fly home on Thursday to attend his uncle's funeral.

Twenty20 captain Carlos Brathwaite is expected to join the team, with Jason Mohammed in line to lead the side.

England were without Ben Stokes after the Durham all-rounder was arrested on suspicion of causing actual bodily harm following a night out in Bristol on Sunday.

Opening batsman Alex Hales, who returned to the southwestern city on Tuesday to voluntarily provide further evidence to police, was also missing from England's team on Wednesday.

Jason Roy marked his return to England duty in place of Hales with a well-made 84 on his Surrey home ground.

England captain Eoin Morgan, however, said: "For the moment, Alex will come straight back in (at Southampton)."