England vs West Indies: Carlos Brathwaite out to prove 2016 World T20 heroics were no fluke

While thankful for having won West Indies a trophy off his own bat, Brathwaite's goal now is for consistent international success.

Chester-le-Street: Carlos Brathwaite wants to prove his World Twenty20-winning heroics were no fluke when he leads West Indies against England in a repeat of the 2016 final at Chester-le-Street on Saturday.

England had one hand on the trophy until a last over where, in a superb display of clean hitting, Brathwaite struck four successive sixes off rival all-rounder Ben Stokes in Kolkata in May last year. 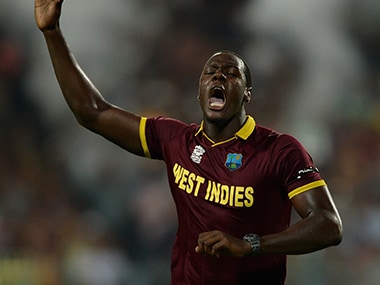 It was the highlight of a West Indies career which has yielded just three Test and 23 one-day international appearances for Brathwaite to date.

The 29-year-old Bajan did not feature in West Indies' recent 2-1 Test series loss in England and has not been selected for the five ODIs that follow Saturday's lone Twenty20 of the tour at Durham's Riverside headquarters — Stokes's home ground.

While thankful for having won West Indies a trophy off his own bat, Brathwaite's goal now is for consistent international success.

"It's something I can't get away from...they even have us playing at his (Stokes's) home ground," said Brathwaite on Friday.

"Social media won't let me forget it, there's been a few videos going around of late. It wasn't just a boundary or a six, it was four in a row. It was on the stage it was, it was against England and in India."

He added: "I probably still can't believe it happened but thankfully we have a T20 World Cup and I have a fantastic story to tell my kids, with the video footage to prove I'm not telling a lie."

"I just want to move on in my career. It was a fantastic achievement and I'm privileged I was the one to make it possible but your career goes on long after that."

Many Durham fans bought tickets in the expectation that local hero Stokes, a mainstay in all three formats for England, would be involved this weekend.

England, however, have taken the controversial decision to rest him from Saturday's clash.

To some in Durham it was yet another slap in the face from the England and Wales Cricket Board, who took the unprecedented step of relegating the side from the First Division of the County Championship in October and then hit them with a massive 48-point penalty for this season in return for a £3.8 million (4.3 million euros) bail-out that stopped the club going out of business in May last year.

However, England limited-overs captain Eoin Morgan defended the decision to stand Stokes down from Saturday's clash by arguing the move could yet prove beneficial ahead of the upcoming Ashes tour of Australia.

"I can see both sides of it, of course guys want to see him play," said Morgan.

"And if there wasn't an injury risk down the line or a huge Ashes tour coming up potentially he might be able to play."

"It's unfortunate it has to be a game at his home ground but we have to stay strong with the decisions and the plans we have so down the line we don't regret playing him in a one-off game."

Morgan insisted England had put their Kolkata hurt behind them, with Stokes and Brathwaite having played a one-day international against each other since their most famous encounter.

"It's nothing to us," he said. "It's a long time ago. Ben has obviously learnt a lot since then, become a more senior, more experienced player since then and he's better for the experience."

"We played West Indies in March and Ben bowled at Carlos...he got him out in the last game."