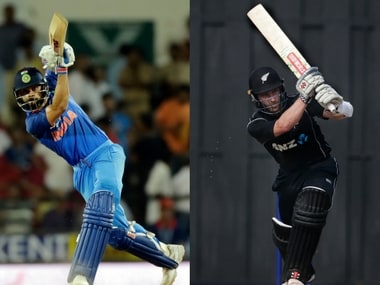 That's all we have for you today. The attention now shifts to Trivandrum for the final T20I. Join us on Tuesday for the match.

For now it's time to say good bye. Take care!

Colin Munro, man of the match: I got lucky with a couple of chances tonight and I just rode my luck. I found the pitch comfortable to bat on and as I played in the ODI series as well, I was comfortable with the conditions too. Guptill was helpful early on and everything went just right for me so I'm happy with my performance.

India captain, Virat Kohli: We didn't take our chances early on when New Zealand were batting. We were happy with how we bowled in the last few overs but our batting wasn't good enough. When you're chasing 200 runs, you need the team to score together or you want one person to get going but it didn't happen. Hardik and MS are good players and this is only a gitch. All in all, we weren't good today.

For India to win, they needed runs from both ends at a fast clip. They didn't get those.

Massive win for NZ. Turned tables on India comprehensively. One way of looking at it is T20 series still alive! Decider promises to be close

BLACKCAPS win by 40 runs in Rajkot to level the series and force a decider! #indvnz pic.twitter.com/mFtqigqGxA

Biggest defeats by runs for India in T20Is:

Bhuvi and Bumrah deny Boult a five-for but Black Caps draw level with a 40-run victory.

New Zealand win the second T20I by 40 runs to level the series 1-1. They produced an impressive bowling performance and never allowed India to gain control in the chase.

OUT! Boult bounces Dhoni and he pulls it straight to Santner at backward square leg. He departs for 29.

Should Shreyas Iyer have come in at number 3 when chasing such a huge score? Hindsight says no. He was too inexperienced to carrMaybeMay be Kohli should have come in at three with Dhoni at four. But its all over bar the shouting, despite the last few blows in the match from Dhoni.

SIX! Dhoni took a middle stump mark and tonked it over long on.

65 off 12 needed. Dhoni is trying to reduce the margin of the defeat. 16 come off the over.

More people leave and they are going at a quicker rate than the wickets that are falling! A dad tells his son, "Let's leave now or else there will be a lot of rush."

So, Dhoni's helicopter is not going to take off. Is it? Another quiet over. Seven off the over.

The Kiwi bowling has held up brilliantly. Their pacers picked up early wickets while the spinners Santner and Sodhi were outstanding. India were outplayed by the world's top T20 team.

OUT! Boult bowls the slower bouncer and Axar tried to cut it from an awkward position. He ends up handing an easy catch to covers.

FOUR! Axar inside edges a yorker to the fine leg fence.

Brilliant over from Santner. Three singles and a wicket off it. Can safely say that the match is heading for an exciting finish in Trivandrum.

There is still some confusion over Kohli's dismissal the screen displays caught Philips bowled Santner but he is going and so is the crowd at the SCA.

OUT! Is that the game? I think it is. Kohli looks to go over long on but edges it to Glenn Phillips. Santner is ecsatic because he has almost sealed the match for the Kiwis. Kohli departs for 65 off 42.

The first over balls of the over don't go as per India's plan. Only three come off it. Then Dhoni manages to slam one over deep midwicket. He retains the strike. 75 off 24. Match slipping out of India's hands.

The required rate is soaring with each ball. It is over 16 now as Dhoni has failed to get off the mark off the first two balls. He edges the third ball towards third man for a single. Only six runs come off the over after the Kohli boundary. India need 85 off 30.

Vintage Dhoni! Bludgeoned it straight. This is what they have come to watch. But props to Sodhi to comeback with three dots. If you look at the scoreboard the chase looks improbable but if you look at the two batsmen out there, you know it isn't a pipe dream.

FOUR! Kohli is not giving up yet. He drives it through covers. The long off fielder had no chance whatsoever.

A six and then only one run from the next four balls. Well, that's of no use in a game like this. India's required run-rate is now more than 15. Will MS Dhoni sacrifice his wicket?

Beaten! Dhoni shimmies down the ground to nudge one round the corner but the ball spins away from him and Phillips fails to collect it. Munro gives it a chase and stops two runs for his team. Dhoni showing intent. Scores a six over long on. Tries to slap-pull the following ball but it goes straight back to the bowler. The fourth ball is a dot. Dhoni pushes the fifth ball towards covers for no run. Dhoni eases the sixth delivery through mid on for another run.

SIX! Dhoni!! Charges down the track and smashes it over long on.

Kohli is doing the bulk of the scoring. Dhoni is giving him the singles. But with 100 needed off 42 balls, both the batsmen need to change gears. 10 come off this over.

Another day, another half-century for India's run machine. He is simply an unstoppable force at the moment. India needs him till the very end to scale down 196.

If any partnership can turn it around for India, this is it — Kohli and Dhoni. Both run well and are powerful strikers of the ball. India weakening its batting line up to accommodate a sixth bowler is telling in this big chase.

FOUR! Again the bottom hand comes into the play. Kohli gets under the ball and whips it over midwicket.

Another 8-run over. But Kohli is batting beautifully. Gets to his fifty, his 18th in T20Is, in no time.

FOUR! Kohli uses his feet to get to the pitch of the ball and sends it over the bowler's head .

Hardik Pandya did not pick the wrong-un of Sodhi and stunned himself and all of us as India once again believe that Kohli and Dhoni will take the match until the end.

The required run rate has crossed 13 and India scored eight runs in this over. Five short than what they would've wanted. These two batsmen are India's final hope.

FOUR! Great use of the bottom hand. Kohli strides forward and sends it down the ground

Silence at the SCA, as Hardik's stay at the crease is cut short. He waited for a long, long time and took a hard look at the pitch before walking back.

In walks Dhoni and the crowd goes lose their minds.

Sodhi gets rid of the big fish. Pandya departs for 1 and India are in trouble. Dhoni gets off the mark with a run to backward square. Kohli drives the third ball to long off for another run. Two more singles follow. Top, top over this from the leggie. At the halfway mark, India need 126 off 60 balls.

Shreyas Iyer lost the momentum after having a decent start and it was important for him to go for everything and he did the right thing and sacrificed his wicket. New Zealand are well on top now.

Shreyas Iyer's immaturity cost him the wicket. Could have squeezed out a single and left it to Kohli to handle the stroke making. But got desperate when he missed out scoring on a couple of consecutive deliveries and hit out wildly to get out at a very inopportune moment.

OUT! Completely befuddled! Lovely bowling. Sodhi has removed Pandya, who fancies spin bowling, with a peach. Pandya waited and waited, until the ball sneaked through his defence and crashed onto the stumps. He couldn't believe what happened. His captain stood at the non-striker's end unamused. New Zealand all over India at the moment.

Munro is into the attack. The over starts with a brace and a single. Then Iyer loses his mojo and edges one. He walks back for 23. Hardik Pandya strolls out at the centre. The over ends with two singles. Five runs and a wicket off Munro's 1st.

OUT! Shreyas Iyer loses his patience. One saw this coming. The knuckleball ends Iyer's stay at the crease. He looks to slog one across the line and skies it high in the air. Munro gets under the ball and pouhces it safely.

Kohli knew India needed to make a move and he does. Scores two boundaries off the first two balls. And surprisingly tries to reverse sweep the third one. He doesn't connect and the ball kisses his pads and rolls towards the off side. Shreyas senses the opportunity and calls his captain across for a single. Oh hang on, Williamson wants to review here and he does. But replays suggest that it was missing. Huge sigh of relief at Rajkot. Not only is Kohli not out, he also got a run, which essentially came off his pads. The last three balls of the over: 1, 6, 1. 17 off the over.

SIX! Kohli shimmies down the track and tonks it over long on to bring up the 50-run stand between him and Iyer.

India vs New Zealand, 2nd T20I at Rajkot: New Zealand win the second T20I by 40 runs to level the series 1-1. They produced an impressive bowling performance and never allowed India to gain control in the chase.

Preview: After a brilliant show in the first match, India will aim to seal the three-match series when they take on New Zealand in the second Twenty20 International (T20I) at the Saurashtra Cricket Association Stadium in Rajkot on Saturday.

India, currently lead the series 1-0 with a comprehensive victory in the first match at the Feroz Shah Kotla Stadium in Delhi and in the upcoming match, India are also the favourites because of their recent form and the conditions.

The hosts will once again heavily rely on the openers Rohit Sharma and Shikhar Dhawan, who blasted identical half tons to set the tone with a 158-run record opening stand and guide the hosts post a massive 202/3.

Apart from them, skipper Virat Kohli will also play a crucial role in the batting department alongside middle-order batsmen Hardik Pandya and Mahendra Singh Dhoni.

After the retirement of veteran pacer Ashish Nehra, Kohli could now play with the four bowlers or might include wrist spinner Kuldeep Yadav in the playing XI because of the conditions.

On the other hand, New Zealand, who were outplayed by the hosts in the first match will look for a better outing this time.

But for that, New Zealand will have to improve their bowling and fielding.

Skipper Kane Williamson also rued his team's poor bowling effort for the loss to India. So they need to step up in this department in order to equalise the series.

Their batting department seemed sorted as apart from the last match, their middle-order batsmen played brilliantly. But in the coming match, Williamson might include experienced batsmen Ross Taylor in the playing XI to give more depth.

In the bowling department, their spinners-- Ish Sodhi, Mitchell Santner will have to step up to the occasion along with fast bowlers Tim Southee, Trent Boult, Colin de Grandhomme because they failed to create problems to the Indian batsmen in the first match.

So, if the New Zealand fielders performed as expected from them and bowling did their job, the visitors might trouble the hosts in the second match and could also level the series.