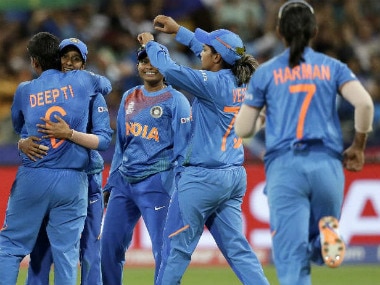 That's it from us today. Bangladesh were no match for India, who were dominant in every aspect of the game. Shafali Verma again got India off to an explosive start, scoring 39 off just 17 deliveries, while Poonam Yadav added three more wickets to her tally. Safe to say that India have all bases covered at the moment.

Do join us on 27 February, Thursday for we will bring you the live coverage and over by over commentary from India's clash against New Zealand. Take care and Adios for today.

Indian captain Harmanpreet Kaur: I think Veda played really well today and helped us close out the innings on a high. We hope to continue on this momentum in our upcoming matches. We have 2-3 days until our next game so hopefully, Smriti Mandhana will be fit by then.

Bangladesh captain Salma Khatun: I think our batting during the powerplay wasn't good and we surely need to improve on that.

Player of the match, Shafali Verma: Since Smriti wasn't playing, I wanted to take full responsibility and get the team off to a good start.

I want to continue doing well for the team and help us win the World Cup here.

​The responsibility of the final over has been given to seamer Shikha Pandey, who starts off with a perfect yorker to get rid of Rumana Ahmed. Pandey is just completing the formalities here really.

Done and Dusted! India Women have defeated Bangladesh women by 18 runs. That also means two wins from the two contests India have played so far.

Most wickets for India against an opponent in Women’s T20Is:

OUT! Pandey completing the formalities. A perfect yorker to get rid of Rumana Ahmed.

Rajeshwari Gayakwad comes in for her last over and concedes two boundaries. Eleven runs off the penultimate over. Bangladesh Women need 22 runs in 6 balls.

Four! Rumana plays the sweep, sending the ball towards the square leg fence for a boundary. Bangladesh still have plenty of gas in the tank, it seems.

FOUR! Short from Gayakwad and Rumana swats it wide of long-on for a boundary.

Harmanpreet making the wise move here, bringing in star spinner Poonam Yadav for her final over. Starts off with two dots, then deceives Jahanara, who gets stumped by Taniya Bhatia. Fantastic over this, just the two runs and a wicket. Poonam finishes her spell with three wickets.

Most wickets by spinners in Women’s T20Is:

OUT! Flighted delivery from Poonam and Jahanara got deceived there, getting stumped in the process. Nice glovework behind the stumps from Bhatia. Three wickets for Poonam already.

Gayakwad comes into the attack for her third over and she removes Sulatana, who hit the third delivery of the over straight to Arundhati Reddy at square leg. Good over at this stage — five runs off the over. Bangladesh Women need 35 runs in 18 balls.

Short from Gayakwad, the ball just holding in the pitch, no pace whatsoever and Nigar Sultana hits it straight to Arundhati Reddy at square leg.

Poonam Yadav back for her third over. And she does the job for India, removing Fahima Khatun on the very frist delivery. Gets smacked for a four by Jahanara on the second ball of the over. A wicket and nine runs off the over.

Going down leg and Jahanara hits it towards fine leg for a boundary. Easy pickings these for Bangladesh.

Poonam Yadav, you beauty. Bowls it short with no pace on it whatsover and Fahima Khatun holes out to Shafali Verma at square leg.

Deepti Sharma back for her last over. Nigar Sulatana dances down the track and smacks the second ball of the over towards deep extra cover for a boundary. Nine runs off the over. Bangladesh Women need 49 runs in 30 balls.

Nigar Sulatana dances down the track and smacks it towards deep extra cover for a boundary. But the intent was always to keep it grounded.

Arundathi comes in to bowl her last over. Gets smacked for two fours by Fahima — got an edge on both the occasions. Costly over that — 12 runs off it.

FOUR! Arundathi bowls it short and Fahima Khatun tries to go over mid-wicket but gets a healthy edge that goes over the keeper for a boundary.

Deepti Sharma back for her third over. Bowls two full tosses — the first and fourth delivery but is lucky to concede only a single. Six runs off the over.

Seamer Arundhati Reddy comes into the attack for her third over. Concedes a four off the first delivery. The third ball of the over was a good length delivery which got rid of Fargana Hoque. Six runs and a wicket in the over.

OUT! Seamer Arundathi Reddy removes Fargana Hoque, who tried to drive the ball towards cover but edged the ball straight to the keeper.

Four! That was slapped towards backward square leg by Nigar Sultana.

Poonam Yadav comes into the attack for her second over. Starts off with three dots. Dismisses Sanjida Islam on the third delivery of the over — India took a brilliant review there and the ball indeed took the edge off Islam's bat and then carried to the keeper. Just one wicket and a run in that over.

Poonam Yadav does it for India, again. Sanjida Islam played the slog sweep but the ball took the bat's edge and carried straight to the keeper. Brilliant review there.

Arundhati Reddy returns for her second over. Gets thrashed for two fours, both from the blade of Sultana. Costly over this — 10 runs off it.

FOUR! Nigar Sultana gets a thick outside edge and the ball races towards third man for a boundary.

Short and wide from Reddy and Sultana guides it to deep backward point for a boundary. Poor bowling this!

Poonam Yadav, the star from India's clash against Australia, comes into the attack for her first over. Deceives the batters on three occasions and concedes just the six runs.

Arundhati Reddy, right-arm fast medium, will bowl her first over. Indian bowlers not giving any pace or room to the Bangladesh openers. As a result, all they can do is sneak singles and doubles. Bowls the fourth delivery full and concedes a four. Finally removes Khatun, who was looking to up the ante but failed to read a slower one, getting caught Richa Ghosh. Six runs and a wicket from the over.

OUT! Khatun looking to up the ante and smack that over mid-wicket but hits it straight down Richa Ghosh's throat at mid-on. First scalp for Arundathi.

FOUR! Extra effort from Reddy, a full delivery and Murshida slaps it down the wicket for a four.

Rajeshwari Gayakwad comes back to bowl her second over. Starts off with a delivery around the middle and leg stump, appeals for lbw but the call is turned down by the umpire. India didn't review that, it could have gone on to hit the stumps. How costly will this be? Good over that — five runs off it.

Shikha Pandey returns for her third over. She gets a leading edge back to her, even dives forward but the ball lands just short. She continues to frsutrate the batters with her inch-perfect line and length. Nevertheless, Bangladesh have been rotating the strike well which has not allowed any Indian bowler to settle. Just four runs from the over and that's the end of the first powerplay.

Right then, a bowling change as Rajeshwari Gayakwad, left arm orthodox, comes into the attack. Appeals for lbw on the first ball of the over but the umpire isn't interested. Bangladesh would want to make the most out of the first powerplay and the field restrictions but in this over there have just been singles inside the 30-yard circle. Five runs from the over.

Shikha Pandey returns for her second over. Bangladesh happy to rotate the strike at the moment, picking up singles and doubles. Five runs off the over.

Deepti comes into the attack and gets thrashed for three fours, all from the blade of Murshida, who is on fire at the moment. 14 runs off the over.

Four! Murshida swivels on her feet and hits it to square leg for a boundary.

Four! Half tracker and Murshida carves it away to deep backward point for a boundary.

Four! Murshida Khatun swats the ball away with a slog-sweep to wide long-on for four.

Seamer Shikha Pandey comes into the attack in the second over and she starts off with three dots, all back of a length deliveries. Digs it shorter on the fourth delivery and concedes a single from the blade of Sultana. She removes Shamima on the last delivery. Two runs and a wicket in the over.

Shamima Sultana tries to smack it down the ground but got no timing on that one — the ball carrying straight to the fielder at Deepti at cover. Shikha with the first scalp for India.

Off-spinner Deepti Sharma begins the proceedings with the new ball for India against Bangladesh opener Shamima Sultana, who gets off the mark with a single on the first ball. Murshida too gets off the mark on the second delivery off the over. Sharma keeping it tight as far as the lengths are concerned. Just the three runs from the first over.

Bangladesh have lost each of the nine matches while chasing in Women’s T20 World Cup that they played before today.

There’ll be mixed feelings for both teams. India were well looking at a 150-plus score given the stellar start at the top of the order from Shafali Verma. Bangladesh bowled well in the middle overs but their fielding remained patchy and they spilt some catches too. Bangladesh will chase 143 for victory.

Bangladesh Women vs India Women, ICC Women's T20 World Cup match live updates: The responsibility of the final over has been given to seamer Shikha Pandey, who starts off with a perfect yorker to get rid of Rumana Ahmed. Pandey is just completing the formalities here really. Done and Dusted! India Women have defeated Bangladesh women by 18 runs. That also means two wins from the two contests India have played so far.

Preview: India will look to come out all guns blazing at the WACA Ground in Perth when they take on Bangladesh in their second Group A match of the ICC Women's T20 World Cup. The Women in Blue made a fantastic start to their World Cup campaign by beating defending champions and hosts Australia by 17 runs.

The chief architect of India’s win was leg-spinner Poonam Yadav, who finished with outstanding figures of 4/19. Yadav was assisted by medium-pacer Shikha Pandey, who picked up three wickets and conceded only 14 runs, finishing with an economy rate of 3.65.

However, India were in a spot of bother as far as their batting is concerned as they could only post 132/4 on the board. Apart from Deepti Sharma (49) and Shafali Verma (29), the remaining batting line up looked rusty and failed to make much of an impact. Among the Aussies, Alyssa Healy (51) and Ashleigh Gardner (34) did put up a fight but that was not enough to get the hosts past the finish line.

India do have winning momentum on their side but they can’t afford to take Bangladesh lightly as their eastern neighbours had beaten them twice in the 2018 T20 Asia Cup.