Australia vs Pakistan: What has gone wrong for visitors in their trips Down Under in last two decades?

Unable to out-bat them, unable to bowl them out quickly, unable to cope with the constant pressure — Pakistan are simply unable to compete with Australia in Australia. And until something dramatic happens, that is unlikely to change anytime soon.

Over the last 23 years, five different teams have managed to win a Test in Australia. Another, Sri Lanka, has managed a draw without any wins. Four teams have lost all the Tests they have played in Australia during this time. Zimbabwe and Bangladesh, who have both played only two Tests each, along with the ICC World XI (one Test match) could point to their lack of contests as a possible excuse. And then there's Pakistan — who have now lost their last thirteen Tests Down Under. And then there's Australia.

It isn't as if Pakistan have just lost there, but rather how often they have succumbed to defeat in a manner that you think their Test status needs to be reconsidered. In only one of the 13 consecutive losses did Pakistan manage to even take a first innings lead, while on nine instances they conceded a lead of over 150 runs! When you are conceding a huge deficit in 70 percent of the matches you play in a country then it's obvious that there aren't any stopgap measures that you can take to halt this domination.

Of course, it has a lot to do with Australia. Pakistan's modus operandi away from home has usually been solid batting efforts to keep themselves in the game, followed by reliance on their bowlers to create one or two sessions of havoc, and voila! This is not something that Australia allows them to do at home. For awhile in the last decades, as Australia vanquished whoever came in their path, there were questions over Pakistan's mental strength against Australia too. But now that they have won 4 of their last 5 Tests outside Australia against Australia, that surely is no longer the case.

In the Southern Hemisphere though, it was as if Waugh and Warne never left. At home Australia come in with the realisation that Pakistan are brittle, and constant pressure will force them to buckle. And thus by the close of Day 2 in firs Test - after two days of Australian pressure - going by most matches between these two sides there appears to be only one result possible.

The first Test of the ongoing series was perhaps a perfect encapsulation of this. Pakistan survived the first two and a half hours, ending up with the highest opening wicket partnership at the Gabba by a touring side.

And yet, by tea, Pakistan were 125-for-5, and struggling to hold on for a little longer. By the end of Day 2 Australia had a 72-run lead with nine wickets still in hand. There was only one result possible from there. It was the sixth time in 13 Tests that Australia had scored over 500 in their first innings against Pakistan. In fact, only twice have Australia been bowled out for under 350 in their first outing by Pakistan. 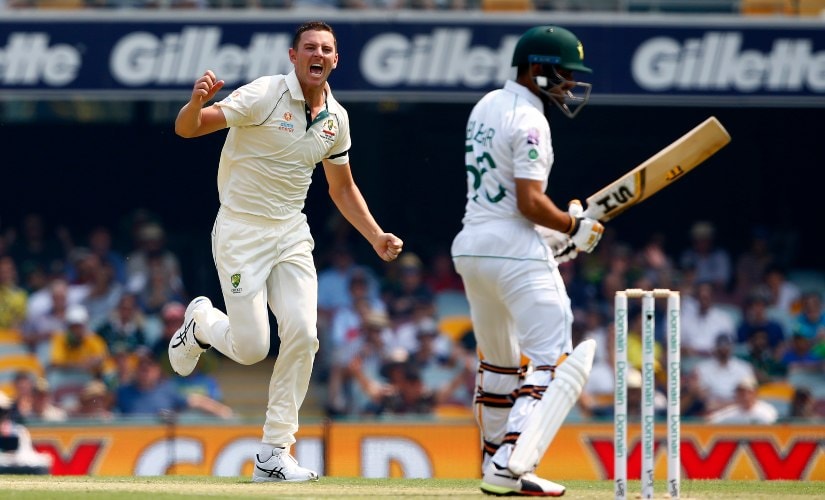 Pakistan have conceded a lead of over 150 runs in nine out of 13 consecutive losses in Australia. AP

Only twice have Pakistan bowled Australia out for under even 350 in any innings of a Test match in the past two decades! One was at Hobart in 1999, the other was in Sydney in 2009. But when Pakistani bowlers bowled well in Australia as they do in other countries, they actually did come close to winning. The difference, though, is that while other countries could be broken by Pakistan's one or two sessions of chaos, Australia just regroups after Pakistan's high worn off. And thus nightmares of Langer and Hussey were born.

But bowling is really not the only thing that leads to success in Australia. In the last 20 years, the only host country with a higher batting average than Australia is Pakistan. India and UAE, often seen as batting paradises, end up 3rd and 4th on that table. Teams don't win in Australia with elite batting or bowling, they need both disciplines to bring their A games. That's not something Pakistan can rely on.

The concerns over Pakistan's batting are ubiquitous, but it's been Pakistan's bowling that has let them down. The following table lists the top 10 wicket-takers in Pakistan's history. Only two of the ten average under 33 in Australia. Add to these the likes of Wahab Riaz and Mohammad Amir — both of whom average over 40 in Australia too — and you get a picture of why it's 13 losses in a row now.

Unable to out-bat them, unable to bowl them out quickly, unable to cope with the constant pressure — Pakistan are simply unable to compete with Australia in Australia. And until something dramatic happens, that is unlikely to change anytime soon.