Australia skipper Aaron Finch describes CA mess as a distraction for his team, urges players to focus on their game

Disarray within Cricket Australia (CA) has distracted the Australian team, one-day skipper Aaron Finch said Thursday as he urged his players to keep their focus on the field.

Adelaide: Disarray within Cricket Australia (CA) has distracted the Australian team, one-day skipper Aaron Finch said Thursday as he urged his players to keep their focus on the field.

The embattled governing body has been under intense pressure after a scathing review said its "arrogant" culture contributed to players cheating in the pursuit of victory. It has led to an overhaul of the organisation. 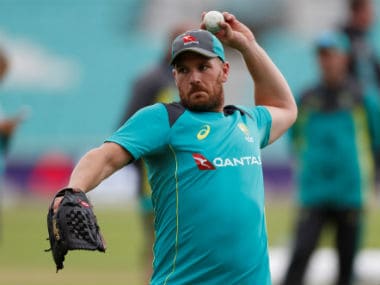 "When there are changes, and there are things being said and written, I think it's hard not to read it sometimes when it's everywhere," Finch said in Adelaide ahead of the second ODI against South Africa.

"You might spend a little bit of time reading it, and putting some kind of doubts in your mind."

Cricketers Steve Smith, David Warner and Cameron Bancroft were banned for trying to alter the ball with sandpaper in South Africa in March. Since then Australia's form has been dire, particularly with the bat.

They go into Friday's clash against the Proteas with 17 defeats in their last 19 one-dayers, including a six-wicket thrashing in the tour opener in Perth.

Finch said confidence was low and it was important that the players focused on the basics.

"It's about getting back to the basics of partnerships and making sure you connect with your partner when you first get out there," he said.

"When we talk about confidence in the batting group, it's about not letting outside distractions affect your game.

"If you can... really make sure that you’re committed to watching the ball and being 100 percent committed to your partnership, I think that'll go a long way towards turning things around quickly."

Finch knows he needs to lead from the front and has turned to master technician Greg Chappell, an exceptional all-rounder, for guidance.

"I managed to catch up with him for a chat about technique and some minor changes (I want to make)," Finch said.

"Someone who is as successful as he was as a cricketer and then as a coach as well, to be able to tap into his knowledge and his thoughts on technique and the basics of batting is huge."