Ajinkya Rahane, Murali Vijay set to play for India A against England Lions before announcement of Indian Test squad

The Indian Test squad for the England series is expected to be announced during or after the England Lions game as it will give them a clearer picture about the availability of certain players.

Worcester: With just a fortnight to go for the start of Test series, opener Murali Vijay and vice-captain Ajinkya Rahane will be looking to get into the groove in India A's last first-class engagement, against England Lions at the County Ground in Worcester, beginning on 16 July.

Vijay and Rahane last played the one-off Test against Afghanistan and were not part of the limited overs squad.

The Indian Test squad for the England series is expected to be announced during or after the England Lions game as it will give them a clearer picture about the availability of certain players. 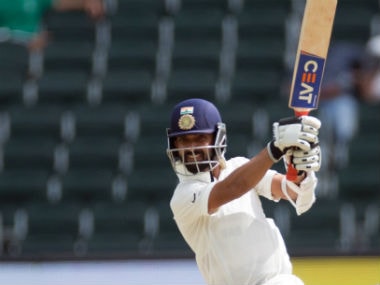 Rahane and Vijay are certainties in the Indian Test squad but unlike others, they would need more red-ball match time, which is the reason why the selectors, after consultation with the team management and A team coach Rahul Dravid, had chalked out a plan.

The two other Test specialists — Cheteshwar Pujara and Ishant Sharma — have played reasonable amount of county cricket and with some of the others playing the limited overs formats, Vijay and Rahane are the only two top players who needed match time.

Incidentally, during India's last tour of England in 2014, Vijay had scored a century in the first Test at Nottingham while Rahane reached the three figure mark at the Lord's on a green top, a match that India went on to win.

In case Wriddhiman fails to make it in time, Rishabh Pant, who has played a couple of match-winning knocks for A team across formats on the current tour, will be the favourite to become Dinesh Karthik's back-up.

Bumrah's injury will also keep the team management worried as he is expected to play a vital role in the pace department alongside Bhuvaneshwar Kumar.

Bhuvneshwar himself is suffering from a stiff back and has not played since the second T20 International against England.

Mohammed Shami has apparently cleared his YoYo test but the team management will like to ensure that he is in a good mental space after having gone through personal problems in recent months.