The JioPhone has been introduced to extend essential internet services to the 50 crore feature phone users in the country. Even though the device is an entry-level feature phone, it is a 4G device and allows the underserved to access medical, financial, governance and information services. There is a lot of interest in the device, and we have put together an FAQ to address some of the questions raised by the announcement. The mobile phone was first revealed during the 40th annual Reliance AGM.

What hardware does the device use?

Qualcomm has confirmed that the JioPhone will use the Snapdragon 205 mobile platform. Connectivity is provided by a Snapdragon X5 LTE modem which allows download speeds of 150 mbps and upload speeds of 50 mbps. The platform supports camera modules that can capture images up to 3 MP, with videos recordings in 480 p at 30 fps. The dual-core CPU can be clocked up to 1.1 GHz, and the GPU on board is the Adreno 304. The QVGA display has a screen size of 2.4 inches. More information can be gleaned from our dedicated coverage on the chipset, but all the features supported by the platform may not be included in the final device.

Glad to partner with @reliancejio on the new #JioPhone, powered by our #205 mobile platform.

What about the software?

The operating system seems to be Linux based, according to the specifications of the platform. There are 22 major languages supported by the device, and users can use voice commands to interface with the phone. All the major applications by Jio are pre-installed on the handset. These include applications such as JioMusic, JioCinema, JioGames, JioKisan, JioPay and JioTV. Users will be able to make calls, send messages and play songs through voice commands, using the integrated voice assistant.

What are the features on the phone?

The JioPhone has an alphanumeric keypad. There is a four way Navigation key above the keypad, with a dedicated button for the voice interface in the middle. There is a headphone jack, as well as a powerful speaker that does not require connection to an external speaker for loud and clear audio. The camera on the back is accompanied by a flash that doubles as a torchlight. The device has an FM receiver, along with a slot for expandable storage. 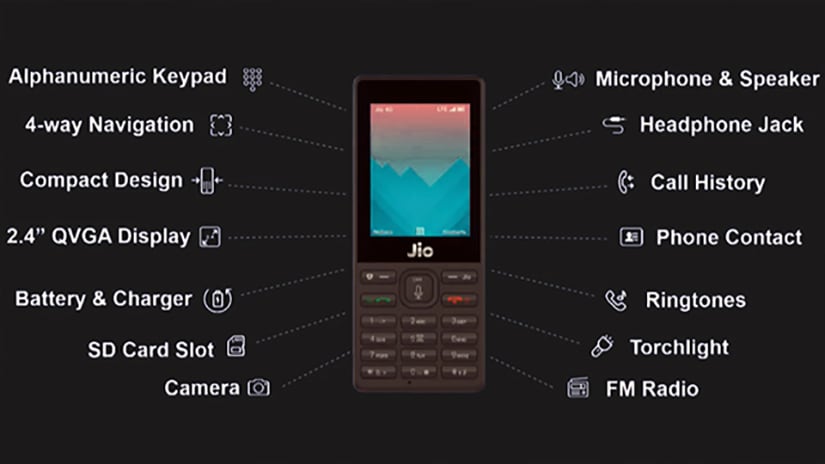 How do you connect the phone to the TV?

Jio has made available a special cable that will allow the phone's screen to be mirrored on even the older CRT televisions. There is no requirement to have a SmartTV for watching videos on a big screen using the JioPhone. The connector cable is known as the "Jio Phone TV cable". Those who do plan to consume TV content through the mobile device, will have to opt for the Rs 309 Dhan Dhana Dhan plan.

How does the safety feature work?

Users have to feed in emergency contacts to the device. Once this is configured, the number 5 button can be long pressed at any time, to send a distress message to the selected contacts. The message will contain geolocation data as well, with a label identifying the name of the place, as well as the latitude and longitude. Jio plans to integrate the feature with local emergency services. What is the price of the device?

The device is essentially free, but has a security deposit of Rs 1,500 to prevent abuse of the free handset. After a period of 36 months, users can return the phone and get back the security deposit. There are two plans available for the device at launch, the Jio Rs 153 monthly plan that allows for unlimited data with 500 MB Fair Usage Policy every day, and the Rs 309 monthly pack which is tailor made to allow users in remote areas to consume three to four hours of television every day. There are also Rs 24 and Rs 54 sachet plans, that will allow users to extend coverage for two days or a week.

How do I get a device?

The device will be available to select beta testers on 15 August. Pre-orders for the device will begin on 24 August, and the devices will be delivered on a first come first serve basis around September. The bookings can be done through the MyJio app, the Jio website, or through Reliance Digital stores. Users who wanted to be alerted with the latest information on the device, can do so by signing up for the updates on the device, at the Jio website. Signing up for the updates is not the same as pre-booking, and does not put you in line for the device.