David Duchovny and Gillian Anderson first premiered their roles as FBI agents Fox Mulder and Dana Scully on The X-Files two decades ago. The series aired nine seasons and resulted in two feature films that was loved by fans worldwide. And, now with FOX ordering a six-episode 'event series' to be helmed by original X-Files writer Chris Carter, there's reason for X-files fans to rejoice!

More so because FOX on 10 June, tweeted the first look of David Duchovny and Gillian Anderson filming scenes for the much awaited season ending speculations on how the characters would look after the hiatus.

The picture shows a camera shot of our favourite duo Mulder and Scully seated in a car dressed for the part. While Anderson looks sharp in a black and white blazer-blouse ensemble, Duchovny's look in a t-shirt, jacket, jeans and sunglasses reminds us of nothing but Hank Moody from Californication. Regardless, we're hooked.

EXCLUSIVE: Your first look at Mulder and Scully! #TheXFiles pic.twitter.com/UexSfktTbA

Previously, on 9 June, Gillian Anderson had also tweeted the following image to set our expectations soaring.

And so it begins... pic.twitter.com/FSDI7W0bMK

The X-Files Season 10 is expected to arrive in 2016. We certainly can't wait! 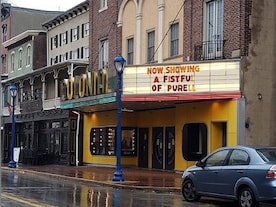 Coronavirus Outbreak: With movie halls shut, local theaters in US have lit up marquees with creative film titles