I wasn’t expecting to enjoy the new web series What the Folks, frankly because I thought it was going to be ridiculous. A basic gender swap is such an old technique in so many shows and movies, where you take a sexist or gender situation and switch roles to show how weird sexism can be, and very few of them do it nicely. Fresh in my mind was Pehredaar Piya Ki, where Sony tried to normalise the idea of a romance between a nine-year-old prince and an 18-year-old woman.

The thing with most of these gender swap shows is that they’re either deliberately, irreconcilably bizarre, like the swiftly-cancelled Pehredaar or they force situations where one gender is masquerading as the other, like in Kamal Haasan’s Avvai Shanmughi or Rani Mukherjee’s Dil Bole Hadippa!. Even the more measured attempts at gender swap, like the 2010 viral French short film Oppressed Majority where you see a man negotiate a perfect matriarchy (which simply looks like the patriarchy, but exactly in reverse), fail to address realistic complexities when they simply shove men and women into each other’s roles. The film annoyingly imagined that men and women are exactly the same except for where they stand in the power hierarchy, and automatically glosses over the nuances of how the experience of gender and oppression plays out. It imagines that a matriarchy would look just like a patriarchy, and that men and women have the same emotional processes. Like when the series Man’s World imagined that a misogynist having a menstrual period in a cosmic mix-up made any kind of point at all. 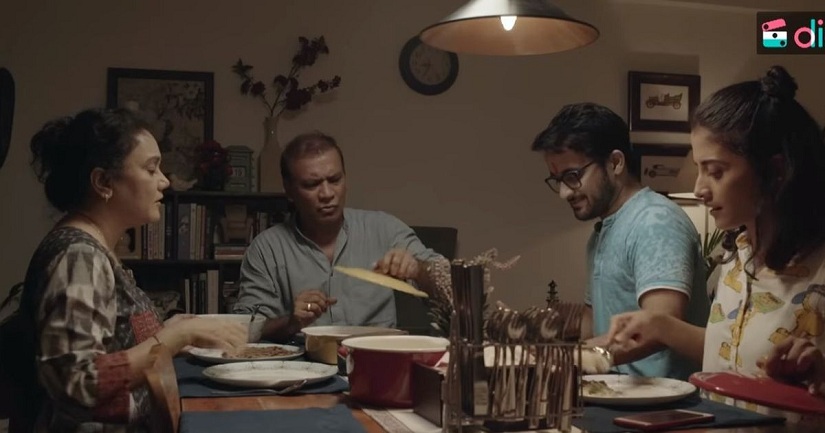 Enter, What the Folks. It’s a five-part web series about a guy named Nikhil (played by Dice Media regular Veer Rajwant Singh) who has to stay with his wife Anita’s (played by Eisha Chopra) parents for a while because of work. The couple have been married for some time, and while Anita remains in Delhi, Nikhil has moved in with Anita’s parents, and younger sister Akshata in Mumbai. Straight off, it sets up all the elements of the conventional family drama: The saas-bahu serial in reverse. But instead of throwing Nikhil into ridiculous gendered situations, or pretending that damaads are treated like bahus, it just gives you a realistic, uncomfortable situation that unfolds in its own particular way with its own particular processes. Like when Nikhil totals his father-in-law’s car and has to deal with his father-in-law’s unique mix of rage, respect for his son-in-law and pride. This is not some easy switched-gender scenario.

As different as it is though, a warning here. What the Folks is enjoyable while it lasts but ephemeral — you could be forgiven for wondering, at the end of 24 minutes, why you don’t really remember the details of exactly what happened in the episode you just watched and yet, you know that the last half hour of your life was an enjoyable one.

But by allowing the situation to unfold naturally with no studied commitment to a noble message or secret insecurity it tries to cover up with humour like Govinda in Aunty No. 1, What the Folks actually inadvertently manages to provide some realistic solutions to the problems saas-bahu serials seem to throw up.

Do you know how serials (and men) make it seem like being caught between your maa and biwi is an endlessly fascinating and unsolvable problem? Anita solves it in a second. At the beginning of episode 4, Anita finds out that her parents lied at the previous night’s party about Nikhil’s age, because they are embarrassed that their daughter is older than her husband. Anita takes the time to Skype her parents from work to scream at them for doing something like that and making him feel bad (he doesn’t really), and to grill them on why they still don’t fully accept Nikhil, forcing them to admit that they do.

That scene amazed me a little for two reasons. When you’ve been so thoroughly tricked by all the media you’ve encountered since childhood into thinking that men are really hopelessly stuck between their wives and mothers, you feel a cloud lift when you see Anita snap at her parents. You feel like you’ve woken up from a trance, and the words of course hiss gently in your brain. There is no problem or quandary, this isn’t a quagmire from which there is no escape. It’s really just that easy. It reminds you of what the spoof video of the encounter between that dude interrupted spectacularly by his barging-in-the-room toddlers while he was giving an interview to the BBC would've looked like had it been a woman speaking: She carries on the interview, soothes the babies and roasts a chicken effortlessly. When you watch What the Folks, you keep getting the feeling that sometimes, you just need a woman to show them how its done. Don’t be a chicken and talk to all parties involved since you are what they have in common.

The show is all about Nikhil, who is genuinely quite likeable while taking up all the screen time. But you feel like Anita’s the real takeaway here, despite mostly featuring on Skype and phone calls from an office. She’s firmly on the side of right, vigilant against attack from her parents, she’s sympathetic to her husband’s (temporary) plight but also hangs up on her husband when he gets too whiny. In negotiating a fairly uncomfortable situation from afar, Anita shows you the variety of ways in which that situation can be handled. So fictional or real-life men who find yourselves in saas-bahu-serial situations, weep no more. Anita has a blueprint.