Watch: The 'Suicide Squad' trailer with Jared Leto as the new Joker is a disappointment

After a year of build-up, which included speculations, rumours, official announcement of the cast in December, leaked set pictures and the leaked movie trailer itself, DC's 'Suicide Squad' trailer is out now (officially). And its a disappointment.

The movie follows 'supervillains' from across the DC universe as they are bought together by a secret government agency to execute dangerous black ops missions in exchange for clemency. 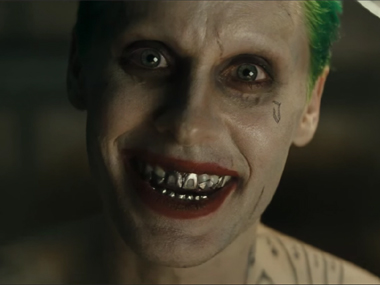 Screengrab from the video

But perhaps the most awaited of all the cast is Jared Leto as the Joker. Leto will play 'The' supervillain in the movie, a character which was taken to its prime by Heath Ledger in Christopher Nolan's The Dark Knight.

The movie is directed by David Ayer (Street Kings, End of Watch, Fury).

Although it may be unfair to judge the entire movie by its trailer, what has been put out so far is disappointing.

The trailer is full of bad cliches and even worse dialogues. And apart from the unconventional premise, the plot doesn't seem very promising. Even Leto's Joker seem to be too similar to Ledger's and doesn't really show how he's different.

But its not all dark and gloomy, the movie promises origin stories for some of its supervillains including Quinn (see 2:17) and also stars Ben Affleck as the Batman.