Watch: The real meaning of the song Macarena will change how you look at it

If you were around in the 1990s and had access to a television set, chances are that you not only immediately recognised the 'Heeeeey Macarena AAAhAA!' line in the song, but also identified it as a call to hit the dance floor.

Macarena , the chart-topping 90s song by Los del Río , with its peppy music and signature dance moves, was a hit everywhere — from discotheques to school parties. The kids of the 1990s were especially fond of the song as it was released during a time when people were just getting used to Western pop music in India. However, while almost everyone knew the choreography and could hum the tune, how many actually knew the meaning of the lyrics? Granted, most of the words were in a Spanish and therefore passed off as gibberish for many of us, the song had English bits as well. And it didn't matter what the song meant as long as we could move to the beats.

But if you  Macarena was like any other dance song or about a girl and her boyfriend, and about having fun, then this again. Because this video by Distractify will ruin one of your favorite 90s song for you. Distractify  got together some fans of the song and  revealed the song's true meaning much to their (and our )shock.

Turns out Macarena is not a foreign phrase or gibberish but the name of a girl, and the girl in this case is philandering and having fun with not one but two of her boyfriend's friends. Whoosh, that's the sound of your innocent, younger version's heart breaking! The girl we all danced with is actually cheating on her boyfriend and singing about it, because 'she couldn't stand him.'

Don't believe us? Here are the English lyrics

When I dance they call me Macarena
And the boys they say que soy buena
They all want me, they can't have me
So they all come and dance beside me
Move with me, chat with me
And if I could I'd take you home with me

Now don't you worry about my boyfriend
The boy who's name is Vitorino
I don't want him, couldn't stand him
He was no good so I
Now come on, what was I suppose to do
He was out of town and his two friends were so fine

Come find me, my name is Macarena
Always at the party con las chicas que estan buenas
Come join me, dance with me
And all you fellas chat along with me

And if you still want to stand by Macarena, here's the original music video 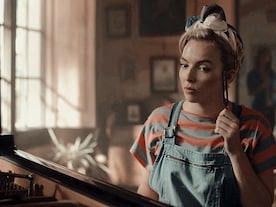