Watch: Cast of Lipstick Under My Burkha look for their dream man with Mallika Dua

The saga of Pahlaj Nihalani and the cast and crew of Lipstick Under My Burkha continues — and it looks like it is turning into a love story. 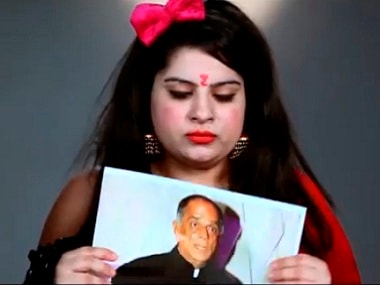 It all started when the Central Bureau of Film Certification (CBFC) refused to certify the film on the grounds that it was too 'lady oriented'. That was the beginning of a war between CBFC's chief Pahlaj Nihalani and the cast and crew of Lipstick Under My Burkha.

Now that the film is finally premiering this Friday, on 21 July, the cast decided to express their feelings against Nihalani and the censor board with this video featuring comedienne Mallika Dua.

In the video clip, Mallika Dua plays a matchmaker that provides 'boyfriends, husbands, f*ckboys' for all seasons and purposes.

The ladies are unimpressed — they have a been-there-done-that vibe going on.

In the end Dua has given up, and grudgingly shows them the man of her dreams that she has been saving for herself — Mr Pahlaj Nihalani.

Shah and Konkana Sen Sharma fight over who gets to be with him, but Dua asks them to share and ends the video with "Iska double charge". Pavail Gulati on humanising an entitled everyman in Thappad, and taking life one audition at a time