The 43-year-old actor also hinted at the chances of the upcoming reboot being revolved around his character, reported Ace Showbiz. "Of course. It can't go on without Hobbs," he said.

When asked about a solo movie focusing on his character, he said, "We all are interested in it. I just had a big conversation with the studio. So we'll see. I still think for me personally we've created a little bit of space for him in 7 and the gauge is set for what the audience will want. That's my take on it, you know, but a lot of other people have to have input."

The eighth installment is set to hit North America on 14 April, 2017.

It will be the first film in the franchise without Paul Walker. Vin Diesel is expected to reprise his role and so is Kurt Russell from the seventh movie.

James Wan is reportedly eyed to direct again and Eva Mendes from "2 Fast 2 Furious" is rumored to return as agent Monica Fuentes. Fast and Furious 7 to be released earlier by a week Paul Walker's Furious 7 to release in India on 2 April 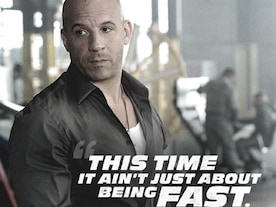