The real trouble with 'Udta Punjab': A Pandora's Box of issues related to the state

Things seem to be getting curiouser and cursiouser for the upcoming film Udta Punjab.

Said to be based on the menacing drugs problem in present day Punjab, the film’s narrative employs gritty realism to show how the entire state is suffering due to substance abuse. While it is believed that the film’s expletive-laden dialogues seem to be the cause for a red signal from the Central Board of Film Certification (CBFC), could the closeness of the film’s narrative to the ground reality, too, be a major hindrance in getting a go-ahead?

And, adding to that is the presence of Punjabi superstar Diljit Dosanjh. 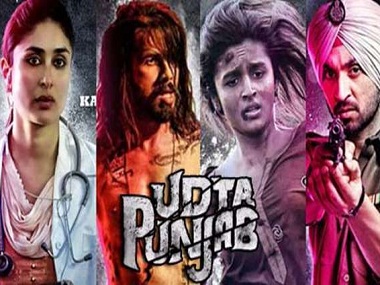 The poster of 'Udta Punjab'. Image from Facebook: Phantom Films

The correct casting of an actor often makes all the difference in the way audiences respond to a film and with Dosanjh featured as a Punjab Police cop in the film more than adds gravitas to Udta Punjab.

Ironically, his presence could very well be the reason for the alleged political pressure to censor certain things in the film. Besides the 40 or 80 plus cuts (nothing is official yet) that the CBFC suggested, their latest salvo - remove all references to Punjab - indicates how worried the so-called powers are with the potential impact that the film could have.

The film’s narrative might highlight the ease with which drugs reach people and from what one assumes such a thing wouldn’t be possible without the compliance of law enforcement agencies. This then somewhere indicates that the drug trade also could be enjoying a certain degree of political patronage.

With Punjab poised to go to polls in 2017, some quarters have also given the impression that the state’s political machinery doesn’t want to broach upon the burning issue. Dosanjh’s presence in the film makes it all a tad too real to be brushed away and the massive fan following that he enjoys in markets with the diaspora in North America and the UK, only adds to the woes of those who don’t want Udta Punjab to reach a cinema screen near you.

Juxtapose this with the fact that the route undertaken by the terrorists during the recent attack on the Air Force base in Pathankot was also the same as the one used by drug cartels probably points towards a nexus between Pakistani terror groups and the state’s drug cartels and what you have is a story that might just end up opening a Pandora's box.

Initially, Dosanjh’s presence in Udta Punjab might have been a wonderful idea to add value to the project but now it becomes a stamp of validation of sorts of the issue it highlights. What could be a better testimony of this, than the fact that the title of a film based on rampant substance abuse across Punjab, the extent of which could be over 70% of the state’s 2.8 crore population, might be ‘defamatory’ to the state.

Ideal casting, they say, is job half done. Had Diljit Dosanjh not been cast, would Udta Punjab not seem a danger to the state government, which hasn’t officially sought a ban on the film?

In India, there are two kinds of casting when it comes to popular films — correct and right. ‘Correct’ casting means absolute and definitive like Nawazuddin Siddique as Dashrath Manjhi in Manjhi: The Mountain Man (2105) where you can’t imagine anyone else; while ‘right’ casting means everyone would be happy and no real controversy would pop up such as Aishwarya Rai Bachchan as Dalbir Kaur in Sarabjit (2016).

Another example of how the right casting can be helpful can be seen with Ms. Rai as Sujata Desai in Mani Ratnam’s Guru (2007). The joke doing the rounds was when people asked top executives if the film was really a roman-à-clef of the late Dhirubhai Ambani, everyone went ‘Ash as Kokilaben...nah, can’t be real.’

While it seems unlikely for Udta Punjab’s woes to end soon, one hopes that better sense prevails because the CBFC’s suggestion of omitting any reference to Punjab in Udta Punjab is appalling and an insult to not only the filmmakers or the audiences but also to basic intelligence.