The other Bollywood starlet: pretty and not 'white white'

Blame it on the great Indian white skin fixation. Or, if you prefer, on a new body code that values skinny, tall women which, in turn, has eroded the flimsy wall between modeling and acting. Most of all, blame it on Katrina Kaif: that long-legged, half-white ‘Sheila’ who is a certified ‘hit’ with millions of Indian men, particularly the ticket-buying middle class.

Years after she rode into Bollywood on the back of an oddity called ‘Boom’, she has blown away most of the criticism about her inability to speak Hindi, her disconcertingly foreign accent, and questionable talent. Katrina Kaif's contribution to Indian cinema is debatable, but there is no doubting what she has given to hundreds of young foreign women: hope. If she can do it, why not I?

Why not, indeed. As long as a girl is pretty and can pass off as vaguely Indian, she’s got a shot at Bollywood stardom. Certainly a better shot today than ever in the past. Giselle Monterio’s career took off with one line of dialogue in Love Aaj Kal, and now that she’s playing one of the lead roles in the forthcoming Always Kabhi Kabhi, making the Brazilian model a lodestar for dozens of her compatriots.

Camila Granato, 22, and Taciane Matos, 18, are both from Brazil. They share the same apartment and modelling agency (Toabh Talents), and will appear together in a song sequence for the forthcoming Mere Brother ki Dulhan. If either girl gets noticed by other directors, she might get more film work, of which they have done little so far.

Camile has been an extra once in a movie shot in Turkey (she doesn't remember the title) and Taciane was part of the background in Thank You.

Most Bollywood aspirants come in as models, having signed up with one of the handful of Indian agencies that bring in international talent to work in commercials and fashion shoots. Advertising is where the real jobs are, and there are plenty to go around. Varun Katoch, business head at Toabh, manages about 30 models of which 20-odd are foreigners.

“But I could hire 200 models and still have work for all. There are tens of thousands of Indian brands and they all want professional models," he says, "The foreign girls often start modelling as young as 14 and by the time they come here, they are quite good at their job."

Varun claims that a foreign model's biggest asset is her appearance: “We actually try and pick models who look a little bit Indian. Brown hair, tanned skin. They’re not all white white.”

However, once in the city, other windows of opportunity open up. The women soon start receiving offers for minor parts in music videos and films. However, Katoch is measured in his enthusiasm about their film careers: “We get queries from production houses. And there’s Katrina Kaif, of course. The girls hear about her and they want to try their luck. Sometimes, during ad shoots, directors will encourage them to try films. But then speaking Hindi is a must.”

Hindi is often the biggest hurdle facing foreigners in Bollywood. While shooting advertisements, merely looking beautiful is sufficient. Films, however, require a basic facility with the language, especially since very few Hindi film scripts have foreigners written into key roles.

Some of the aspiring actresses are less impressed by the Hindi requirement. “In Hindi films, a female actor just needs to look pretty. The only other thing that matters is who she’s hooking up with," says actress of mixed parentage (she speaks Hindi quite fluently), "They just get pedantic about the accent when it suits them.” 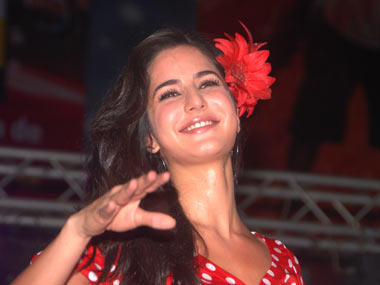 As long as a girl is pretty and can pass off as vaguely Indian, she’s got a shot at Bollywood stardom. Raju Shelar/Firstpost

I am NOT an extra

But the hopefuls remain, well, hopeful. Evelyn Sharma, a half-Indian, half-German 23-year-old, has enrolled in an acting course, is learning Hindi and taking Bollywood dance lessons. “I grew up in Germany and came to India as a travelling model. But I love acting. I have done some theatre and one American action film," she says, "But Inega, my agency, will not let me do bit roles in Bollywood. The first film is so important."

However, most agents are anxious that journalists get the "story" right. Sure, their models may take on non-lead parts in ‘major productions', but they’re not ‘dancers’ and they’re very emphatically not 'extras’.

This anxiety about branding reflects the explosion of white skin-as-scenery in Bollywood movies. And there is certainly no shortage of these human props.

All an interested woman has to do is hang around at Colaba Causeway and wait for a ‘talent’ scout to come along looking for foreigners. If she gets cast, the extra will likely have to put up with a 12-hour shift, famously bad food, tacky costumes, and plenty of boredom. In return, she will get paid anywhere between Rs 500 and Rs 1,000. The system is so well-established that travel websites now ask tourists to hang out in Colaba as part of their ‘Experience Bollywood’ plan.

The stakes are, however, higher for these cheerful, beautiful girls who have descended upon Mumbai from Germany, Brazil, Russia, or the UK. Yes, they’d like to be in Bollywood but not as props on a set, not as shadowy figures wiggling in the backdrop of a ‘classy’ video. They’re here for a sprinkle of stardust – and sometimes just to earn a decent living.

As Camila explains, Brazilian girls often start modelling to support their families. Unless they attend expensive schools, it is difficult to even to learn English. Besides in countries like Brazil, there is not much of a film ‘industry’, and its production values are worse than television.

Taciane would love to try her luck in Brazilian TV – there’s money and fame, and she could be near her beloved mama. “But I’d have to go to Rio for auditions, and living in Rio is too expensive.” Giselli Monteiro made her film-debut in Love Aaj Kal. Image from Wikimedia Commons

Evelyn, who has already worked in a Hollywood production, says Bollywood is a bit easier to break into. “In LA, everyone is there to become an actor. It isn’t like that in Mumbai,” she says. A moment later, she shrugs and laughs. “I don’t know. Perhaps it is like that here too. But not everyone gets a chance (in Hollywood).” It's certainly easier to get a shot at the big time in India than the United States, which offers few opportunities – however small – for anyone who looks exotic, Salma Hayek and Penelope Cruz aside.

Mumbai, then, is a place that offers at least hope – and a way to pay the bills to sustain the dream. The work in advertising and fashion offers a decent living, and half a foot in that door to stardom. Film work, on the other hand, is less rewarding.

Bollywood pays foreign models only as much as— and sometimes even less than— Indian supermodels, says one of the talent managers in the city: “On an average, payments range between Rs 15,000 to Rs 50,000, for songs and minor roles. Sometimes, it might be Rs 1 lakh.” But no international model, he says, can afford to stick around in Mumbai unless they’re making at least a lakh a month.

Work in Bollywood offers little money, and a slim chance of stardom. And yet these women persist. Evelyn says that a lot of her foreign friends are aware they may not become ‘super famous', but they still want to experience the magic of being in the movies.

“In commercials, you are always playing someone else. But it is only movies that let you be yourself even while you are acting. At least once in your life, you want that,” she says.

Evelyn admits that you’d have to be half-Indian or pass off as Indian —“like Giselle”— to get a real break, but her hopes remain high. “Bollywood is changing. More foreigners get lead roles. I know a Swedish girl who is playing the lead in a small production,” she says. She pauses, and then adds, “I can’t wait for it to change.”

Blame it on the medium then. Look at the way the camera lingers on the faces of actors, while it merely glances at dancers. The women in the background make a living. They are likely better trained and more talented than the girl standing up ahead, pouting at the camera. But it is that girl who we truly 'see'. The camera loves her, and so do we.