The Firstpost Playlist: From Keira Knightley to Steven Wilson, with a dash of Courtney Love

From quiet, melodic instrumental music to a punk song that will compete against the rains lashing your windows, The Firstpost Playlist is back with a mix of songs that has something for everyone. Be impressed by Keira Knightley's vocal skills, express your angst with Courtney Love or be pleasantly surprised at Steven Wilson's take on Porcupine Tree's Lazarus. Wherever your interest lies, the playlist might just help you find a new one.

Rings of Fire by Melissa Kaplan

After one of my favourite bands, Splashdown, broke up, the lead vocalist, Melissa Kaplan, went on to form ‘Universal Hall Pass’, a project featuring her vocals and lyrics plus guest contributors. This is a cover of Johnny Cash’s Ring of Fire. Unlike most covers, this is not a copy of the original; Kaplan does a great job of adding her own style to the song including Middle Eastern influences and stunning vocals. The song was a joint collaboration with the electronic duo Mugat. She credits Radiohead, Bulgarian folk, even Bombay Jayshree among her influences.

Exploring a variety of genres in music has been one of my favorite pastimes in recent years.

One of my new favorites is a beautifully composed Malayalam song from the movie Premam. What caught my attention, inspite of the language barrier is the absolute simplicity in the lyrics as well as the music. There are no major highs or lows but there is something surreal about it. It kinda grows on to you. I have heard this a multiple times now. It's a stunning and simple yet poetic description of his love that culminates into a charming malare (Floret). From the hues of rainbow to the cool breeze caressing the tunes of flute, the cinematography is worth watching.

Not a great fan of love songs but this one's got me interested and how!

Only Now by Shak

There's a storm outside our windows and the monsoon gods are slaying it. The days of fawning over "petrichor" are over; this sh*t is real.

With so much happening around us, sometimes your ears crave something that can instantly relax your muscles organically, and reduce your blood pressure. This is where Amsterdam-based music producer Shak comes to your rescue. Partly sounding like MGMT, and partly like Zero 7, Shak's specialty lies in ambient music — three minutes of your day that you can spend multitasking because the background score is so soothing.

True to its name, Only Now is a compilation of some of the most dreamy melodies put together. It makes you feel alive in this very moment, playing with your sense of sound.

Picture yourself sitting beside a window, watching the rain come down with vengeance, while listening to this song, and you'll be the very embodiment of an antithesis.

With all this rain hammering down, floods are inevitable. With floods, comes the inability to commute or move around without the fear of being marooned, soaked or worse, afflicted by leptospirosis. If not for context, then for mood alone, this is the perfect song to sum up the weather phenomenon we're currently experiencing.

Damn it. Damn it all!

This song and its video remind me of my favourite movies, Alien and Sunshine. The ambient track lives up to its title by being muted and minimal, both in its music and the video. There is something very calming about this bright, melodic song. I like how ambiguous the video is as well, leaving it up to the audience to interpret the woman's circumstances. Hammock is definitely a band to follow for good instrumental music.

We all know Kiera Knightley best as an actress, but this track also reveals that she can be a riveting singer. Slip on your headphones and let this actress of many talents capture your heart as she gently croons this melodious number. A more popular version of the same song was sung by Adam Levine as the OST for the musical, Begin Again. Both Knightley and Levine starred in the movie.

With earthy, real beats, this song is a reminder of how music can be beautiful in it’s simplicity. Songs like this one remind me of how melody can lift the spirits and soothe the soul. The lyrics don’t make sense in the first listen, but multiple listening sessions reveal layered meanings in metaphors such as it’s hunting season, the lambs are on the run. Kick back this weekend with a steaming hot cup of tea and play this song as the rain pitter patters on the window. You’ll be reminded of how beautiful life can really be, if you just enjoy the simpler things.

Steven Wilson — singer, songwriter, lead guitarist and founder of the English prog-rock band Porcupine Tree — is headed to India in October, and yet again, in December! He is scheduled to perform at the NH7 Weekender festival in Shillong (October) and Pune (December).

Naturally, this has all Porcupine Tree fans elated. It has been almost seven years since Porcupine Tree enthralled revellers at IIT Mood Indigo. While it has been as many years since the prog-rock band has cut an album, Wilson has been consistently releasing his solo work, which is getting better every year. That the man is a highly underrated musical genius, is a foregone conclusion.

So it was quite a surprise to stumble upon Steven Wilson revisiting a Porcupine Tree song — Lazarus — in his solo concert tour. Wilson has generally been sticking to his solo material in his concerts. Wilson's live renditions though, just elevate the already beautiful songs. His lyrics slowly grow on you, and Lazarus is a good example of that. It is a metaphorical take on the biblical story. Lazarus alludes to resurrecting and reinventing oneself. Thematically, I find Lazarus to be the polar opposite of another lovely Porcupine Tree song - Buying New Soul.

The guitar improvisation from 2.38 to 3.00 is what makes this version stand out, from the many I have heard before.

Yes, Porcupine Tree is dearly missed. But Wilson's solo work is surely making up for it. 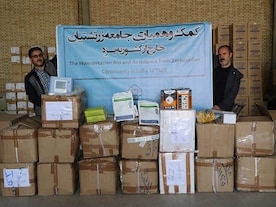 'Tell them my fingerprints are all over these walls, those leaves, that sky...'