Amazon Studios has announced its upcoming show Tales from the Loop, executive produced by Matt Reeves, will premiere on 3 April. It has also revealed a new trailer from the eight-episode miniseries, created and written by Nathaniel Halpern.

Based on Swedish artist Simon Stålenhag's works, Tales from the Loop explores the town and people who live above “The Loop,” a machine built to unlock and explore the mysteries of the universe – making things possible that were previously relegated only to science fiction. In this fantastical mysterious town, poignant human tales are told that bare universal emotional experiences, while drawing on the intrigue of genre storytelling.

One day many years from now, you'll wonder if this ever happened. #TalesFromTheLoop arrives April 3 to Prime Video. pic.twitter.com/SK8wLngKiA

Stålenhag, who is also a co-executive producer on Tales from the Loop, shared the trailer of the show. Check it out here

I can finally share this with you! https://t.co/F2COIYIARW — Simon Stålenhag (@simonstalenhag) February 27, 2020

For the show, I did three special versions of the art from the original book. I had really fun doing these. It was so cool to get to incorporate the actual locations and characters/actors from the show: pic.twitter.com/A3am7eHCHk — Simon Stålenhag (@simonstalenhag) February 27, 2020

Here are the original pieces from my book pic.twitter.com/sA70i8JsYD

Tales from the Loop is the first TV series in history to be adapted from digital paintings. 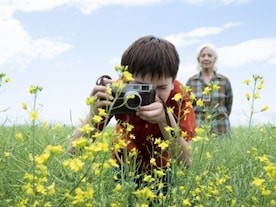