Star Trek: Discovery is easily one of the most anticipated TV shows of this year. The franchise has now revealed its first openly gay character — Lt Stamets.

The character will be played by Anthony Rapp. In a statement given to Entertainment Weekly, producer Aaron Harberts said, "We’re at a point in time where people aren’t defined by their sexuality."

A glimpse of Stamets' look from the film was also released:

Stamets' character is a fungus expert formally known as a anastromycologist. The new series is setting a different tone for not just the characters, but also their personal lives. It will explore the characters from close quarters and delve deeply into their emotional side as well.

Rapp had earlier said he was very proud to play a gay character in the upcoming series. He also told EW that the character of Stamets has been created after much deliberation so as to not depict him in a stereotypical way.

It is evident that the immensely successful franchise is tapping into a diverse audience by experimenting within the realm on of its brand. Star Trek: Discovery will also be the first series in the franchise to have a black female lead, who will be played by Sonequa Martin-Green. 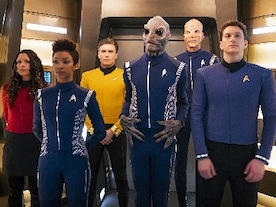 Kevin Spacey apologises to Anthony Rap; says he chooses to 'live as a gay man'