Writer-director Guy Nattiv seems fascinated by shape of American racism. In his Oscar-winning short film Skin — which shares a title, topic and actress with this, the feature-length version, though little else — Israeli-born Nattiv introduces us to a rural white family who seem personable enough, though a clearer look at their tattoos reveals them to be white supremacists. What follows is a bizarre eye-for-an-eye tale that reduces racial tension to a cosmetic problem; a learned one, granted, though Nattiv’s first film on the subject lacks the kind of grounding he at least attempts in his eponymous follow-up, starring Jamie Bell and distributed by A24.

Rather than portraying a funhouse-mirror version of racial violence as-is, this iteration of Skin takes its cue from the true story of reformed skinhead Bryon “Pitbull” Widner (Jamie Bell) who, in real life, sought the help of activist Daryle Lamont Jenkins (Mike Colter) of the One People Project and turned his life around, a process that involved removing his litany of White Power tattoos.

Nattiv’s external fascination with Neo Nazism yields a lightning-strike of an opening. The director explores the shape of Bryon Widner through flashes of how he was molded; an extreme close-up of him having his head shaved as a child; a rear-view of him getting his tattoos as a twenty-something; on overhead shot of Widner and his Neo Nazi comrades marching across an Ohio bridge in 2009, chanting and waving torches as they seek to engulf a group of Black counter-protesters.

Nattiv understands the power of imagery. He even takes liberties with the timeline, tossing in more recent protest slogans on either side, so a film this deeply focused on one man’s ink feels right up his alley. Though Brydon’s journey in Skin, and by proxy the film itself, rarely pierce the surface. 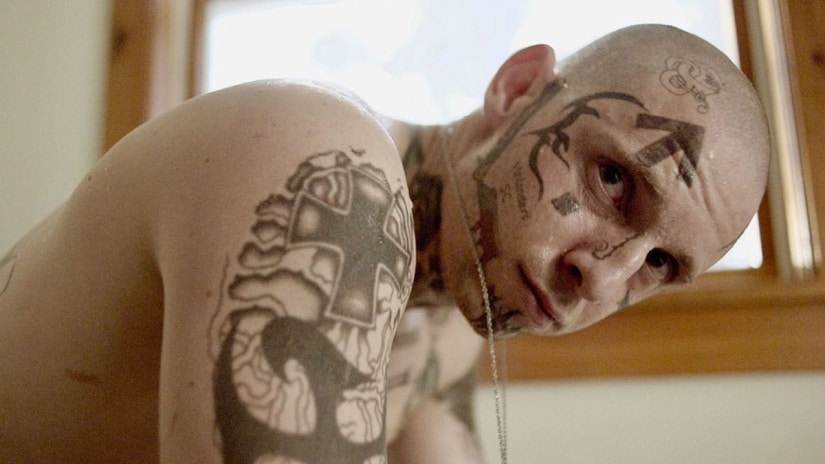 Jamie Bell in a still from Skin

Skin is at its best in the rare moments when Nattiv treats Widner like a concept; an anatomical study of a man burdened by violent insignia and hunched over by guilt. He often shoots Jamie Bell from behind, or head on, or in profile — ninety-degree angles — allowing Bell to silently contort himself and tell Widner’s story through posture (including on the toilet, with his tattoos on full display). But a near-academic perusal can only go so far, especially in a film about struggling to change. While initial scenes of Widner frequenting his group’s den, or screwing in hallways, or making a general ruckus, all present Neo Nazism as requisitely tribal, this animalistic energy soon fades. It’s neither an allure for the film to subvert, nor an indictment of Widner’s cult. It’s simply a flourish without consequence.

At the heart of Skin lies a family drama. Widner’s adoptive parents, astute, professorial Fred Krager (Bill Camp) and easy-going hippie Shareen Krager (Vera Farmiga) — known as “Hammer” and “Ma” respectively — ring-lead the local Norse-inspired White Power chapter, while Widner’s budding romance with outsider Julie Price (Danielle Macdonald, who featured in Nattiv’s short) and his fondness for Julie’s three daughters makes him question his allegiance. Widner meets Julie, the child of a Klansman, amidst her own attempts to escape her past. She can’t quite seem to leave the Neo Nazi orbit (her girls performing a song at Hammer’s rally is an easy paycheck) since she, like Widner, can’t find much work elsewhere.

Julie’s tale of trying to keep her life together is much more intriguing than Widner’s, though the narrative squeezes her into an odd position. She’s both central to Widner’s story — in a pleasant surprise, the plus-size Macdonald is made the unapologetic center of Widner’s and the film’s affections — and yet her centricity never translates to real narrative purpose beyond catalyzing Widner’s change. Which, in itself, is its own can of worms, since Widner’s reformation in the film is owed to Julie and Julie alone, with little concern for his actual outlook, or even the multiple racist hate crimes we see him commit.

The film often flashes forward to dreamlike montages of Widner’s tattoo removal, a several hundred day-long laser process. The doctors and technicians assisting Widner are all hidden behind masks and goggles, and the laser’s exaggerated flash makes them seem like mad scientists, rather than saviours. The camera hovers just millimeters above Widner’s skin, glaring at each individual burn as his tattoos are erased; he winces and screams, as if undergoing a violent penance. The rest of the film, however, never aligns the mid-reformation Widner with these painful vignettes.

Widner’s supposed post-racist transformation — one spurred by his love for a white woman — feels purely physical, though Bell certainly carries Widner’s tortured soul just behind his eyes. We’re shown nothing of the pre-Neo Nazi Widner (a secondary character, a starving teen similarly suckered in to the movement, stands in for Widner’s past), and Widner is initially humanised through his love for his dog, as if to embody the long-running joke about white folks caring more for their pets than for people of colour.

Ironically, the film only uses its handful of Black characters as mere distillations of possible responses to someone like Widner, ranging from violent reprisal to loving embrace. Though it offers little beyond lip-service to any of these choices, or where the impulses behind them might stem from. Colter’s Daryle Lamont Jenkins, notably, exists in a bizarre space between these extreme approaches (extremes he never once wrestles with), wherein he hopes to help reform Widner, but his methods include random provocation and harassing Julie and her children. Rarely is there an emotional logic or recognisable perspective to the film’s Black characters, who are mostly relegated to tertiary roles.

This problem of perspective isn’t limited to Jenkins. The solitary moment of Widner deciding not to do as he’s told, vis-à-vis racist violence, doesn’t feel tethered to his outlook, or even to the act itself. Several scenes offer the opportunity for Widner’s coming-to-god moment, but they’re rushed, and don’t grant Bell so much as a reflective closeup, let alone an extended internal dilemma. Rather, the film relies on the vague notion that loving Julie and her children has sparked some sort of reform within Widner — a reform that’s never seen or felt — as the film inadvertently positions white femininity as liberation from racist tendencies.

The meta-textual questions of timing are inescapable — Why this story? Why now? — though even taken at its word, as a straightforward tale of reform, Skin offers little by way of insight into reformation, let alone modern racism. The emotional mechanics of Widner’s journey rarely live up to the searing burns of his tattoo removal. And while Bell and the wider cast perform admirably, their work ends up in service of a bite-less, un-challenging film that, at best, has no idea how to sympathise with its subjects. At worst, it’s a gross misunderstanding of where we are as a culture, given its failure to empathise with an audience growing increasingly reluctant to let white characters and perspectives hold the baton of racial narratives — since a film like Skin is so often the result.