Under normal circumstances, you'd think that when three of the four people credited with having written Queen join hands again, the film they'll make will be fun and clever. When they've been entrusted with a big budget and lavish settings, you'd expect a film that's fabulous. Shaandaar proves that these assumptions are wildly off-base. It turns out that the message that prefaced episodes of The X-Files were bang on the money: Trust no one.

Cynics (like yours truly) might have figured from the trailers of Shaandaar that it wouldn't be quite as quirky as Queen, but director Vikas Bahl's new film is a surprise. No one who has seen Queen could have anticipated such a drastic drop in storytelling and directorial skills. After all, Shaandaar is something of a reunion for the Queen team. It has Bahl as director. The story has been written by Bahl and Chaitally Parmar (part of Queen's writing team too), with dialogues by Anvita Dutt, who co-wrote the dialogues for Queen. Yet, Shaandaar is exactly the opposite of its title. It's sloppily written, lazily directed and completely without insight. Trust no one indeed. 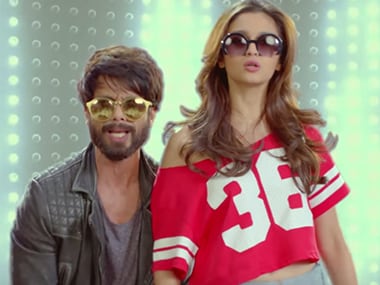 Shaandaar gives you fair warning that this film is anything but fabulous, right from its first scene. The film begins with a shoddily-animated sequence and a listless voiceover by narrator Naseeruddin Shah. We learn that a little girl named Alia has been adopted by a gent called Bipin Arora, who has a goatee, an old beer bottle cap, a dominating dowager mummy and a catty wife. Apparently, no one ever understood why Bipin brought Alia home and raised her with such love and tenderness. Clearly, no one in Bahl and Parmar's imaginary world has seen Masoom.

Years pass and the animated characters from the opening episode transform into flesh and blood cartoons. Alia (Alia Bhatt) is by now a raging insomniac who flits around chewing gum, taking midnight swims, eating bananas, reading books and Googling like a maniac — because what else is a girl to do in the dead of the night? Bipin's (Pankaj Kapoor) one dream is to find a man who will put Alia to sleep. This is the running (not-so-funny) joke in Shaandaar. When Bipin's daughter is to have a grand wedding in an English estate, Bipin and Alia meet wedding planner, Jagjinder Joginder (Shahid Kapoor). He drives a bike, can bust out mean dance moves and is also an insomniac. Ergo, Alia and Jagjinder are obviously made for each other. While Alia and Jagjinder woo each other by peeling Fevicol off their palms, Eesha realises that the man with whom her wedding has been arranged has absolutely nothing going for him other than his eight-and-a-half pack of abs.

On paper, Shaandaar is the story of two sisters. One is the adopted child, the pretty one who struggles to find acceptance and is an insomniac. The other is good at heart, tubby and being used by her mother and grandmother to secure a deal with a business partner because the Aroras are almost bankrupt. On screen, Shaandaar is Bahl's attempt at making a mashup of Frozen and almost every Rajshri Production film, but in Dharma Productions' packaging.

All the stock characters are there, including the grandmother. There's a picturesque location, an elaborate wedding, lots of senseless song sequences, a romance that's absurdly chaste and some ghastly animation (remember Main Prem Ki Diwani Hoon?). Since it's a Dharma Production, the wedding takes place in England for no ostensible reason, Bhatt is wearing clothes that show off her lissom figure, there's a gay 'chachu' who obviously has a limp wrist and is a stylist, and Karan Johar has a cameo.

The best parts of Shaandaar are in its trailer and if you do survive the full 145 minutes, you'll realise that the way the film has been written and directed, it's more a series of YouTube sketches than a proper story. Why are the Aroras marrying Eesha off in England when they're verging on bankruptcy? How is it that two business families agree to marrying off their marriageable members without doing a wee bit of research on the prospective in-laws?

Bipin can draw cartoons that actually move, like the photographs in the newspaper in Harry Potter films. This doesn't strike anyone as fantastic or even unusual. Why does Alia get a panty when everyone else gets breakfast? No reason. Why is Eesha stripping down to her underwear at the mandap? Just 'cause. There's a "black and white" ball which isn't made up of people wearing black and white outfits. That would be logical. Instead, that entire party is shown in monochrome.

Nothing adds up in Shaandaar and few of the characters have any sort of evolution. Alia is the wild child, Bipin is the kindly but weak-spirited daddy dearest. Jagjinder is the hardworking good guy. The only thing worse than Shaandaar's script is the editing, which makes the film a meandering, boring medley of forgettable songs, interspersed with some laboured comedy. The pace is slack and there's no tension in the film. Frequently, it feels like large chunks of the story were snipped to make space for fluffy, silly repartee that contributes to neither character nor plot. Then at one point, as though no one could bear it anymore, the story gets bundled into a rushed ending. The only thing worse than the editing is the unnecessary and amateurish CGI that plagues the entire film.

With all this against them, it's to the cast's credit that Shaandaar isn't unwatchable. Shahid Kapoor and Alia Bhatt look gorgeous and do their best to keep you entertained with their easy delivery and sharp dance moves. However, the two are entirely unconvincing as a couple, unless love in 21st century India is made up of chaste distances and inane chatter. Sanah Kapoor (Shahid's sister) makes her debut and is credible as the quieter sister, whose weight makes her the butt of many people's jokes. However, Sandhya of Dum Laga ke Haisha remains our favourite plus-sized heroine. Pankaj Kapoor spends most of his time on screen looking befuddled, which just about sums up what the audience feels too.

By the time Shaandaar draws to its close, you can't help but wonder just how much of the heavy-lifting in Queen was done by Kangana Ranaut.