Second trailer for Fifty Shades of Grey is out, and it's so dull, again

So the new trailer of the upcoming film version of BDSM-meets-romance Fifty Shades of Grey is now out on YouTube. Yes, a great way to waste Friday at work by replaying this trailer, again and again.

The film stars Jamie Dornan who is Christian Grey aka the BDSM-loving control freak/slave master/super rich hot man and Dakota Johnson plays Anastasia Steele aka Virgin/quickly gives in to BDSM/simple girl turned bondage freak. The trailer is set to Beyonce Knowles' new single Haunted, (the last one had a version of her Crazy in Love playing in the background).

Obviously the most important question is: this trailer hot enough? And once again the answer is a resounding no. For starters, the trailer begins with Anastasia meeting Christian again. Hello we saw that in the last one, and we don't care. Give us the red room.

Thankfully we get to see a teeny bit more action, but it's all in the end of the trailer. You might just prefer to fast forward. There's a scene where Grey is going down on Anastasia, and it kind of looks hot. Let's hope the Indian censors will let than one pass. 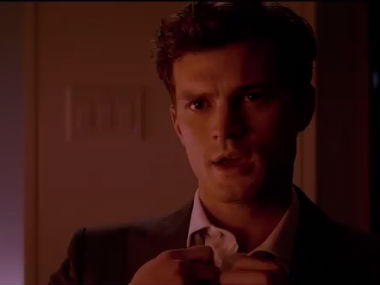 Screenshot from the trailer.

We also get one tiny peek at a whip going up Ana's thighs and then we see her tied up moaning and stuff, at the end of what we must presume was a sex session. Except it's really too short to cause any excitement.

Sure there's a lot of shots of Ana and Christian covered in red light in the red room, and bit of nudity when they are in the bathroom, but seriously it's all just quick shots in the trailer.

For now it gives us very little sense of how the action will be in the film. To add to our disappointment, it has been reported that Dornan's penis (which is rather well-described in the book by Anastasia) won't be shown in the film. So don't expect to see too many genitals in the film.

The only good thing we can say about the trailer: it's building up the expectations for the film with its teasing and titillation policy.

But if it doesn't show enough sex that many "Fifty Shades" fans will be expecting, it will be a huge disappointment. The movie releases on 14 February 2015.