Filmmaker Imtiaz Ali's new iteration of Love Aaj Kal is slated to release on 14 February, on the occasion of Valentine's Day. Kicking off the promotional spree for the romantic drama, leading lady Sara Ali Khan made an appearance on Kareena Kapoor Khan’s radio show What Women Want, where she spoke about the contentious title of the film and the changing notion of love.

Ever since the trailer of Love Aaj Kal dropped, there have been roaring comparisons between the new iteration and the 2009 original. Saif Ali Khan's admission of liking the trailer of the old Love Aaj Kal more than that of the 2020 reboot added fuel to the fire.

Opening up on the comparisons between the two films, Sara says Love Aaj Kal (2020) was never considered to be a sequel. "It's a film that showcases what love is today," Sara asserts, revealing Ali has even joked if he were to make a film on the same theme again after a decade, it would be called Love Aaj Kal.

While the comparisons surrounding the film do not scare her, she admits she feels the pressure to have to measure up to the other actresses who have worked with Imtiaz, including Kareena (in Jab We Met), Anushka Sharma (in Jab Harry Met Sejal), Alia Bhatt (in Highway), and Deepika Padukone (in the original Love Aaj Kal).

When Kareena asks Sara what she thinks is the one defining difference in a relationship today as compared to two decades ago, Sara says women are more vocal about their needs than they were 20 years ago. "There was a quiet demeanour to women, which was perceived as the correct way to be," Sara says, adding emotional and financial independence, and confidence in one's own skin are perhaps probable reasons why women are more vocal in the present time.

What Women Want has previously seen Sara's father Saif Ali Khan, aunt Soha Ali Khan, and grandmother Sharmila Tagore grace the show. Kareena is married to Saif, which makes the guest of her latest show a sort of a 'casting coup.'

Check out the episode with Sara Ali Khan here

She’s bubbly yet bold! Most of all she’s all gold! Catch up with #SaraAliKhan and #KareenaKapoorKhan as they discuss contemporary relationships on #DaburAmlaWhatWomenWant Season 2: https://t.co/6JdnIylAkE pic.twitter.com/EbwfEeFais 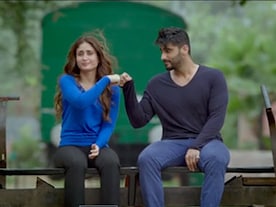