Oscar season is looking more and more like one very well-dressed protest against President Donald Trump.

The SAG Awards culminated with the evening's top honour, best movie ensemble, going to the cast of Hidden Figures, an uplifting drama about African-American mathematicians who aided NASA's 1960s space race, starring Taraji P Henson, Janelle Monae and Octavia Spencer. Henson concluded the show the same way its first presenter, Ashton Kutcher, began it: with the kind of pointed politics that have traditionally been more an aberration than a constant at Hollywood award shows.

"This story is about unity," said Henson, who stars alongside Octavia Spencer and Janelle Monae in Hidden Figures. ''This story is about what happens when we put our differences aside and we come together as a human race. We win. Love wins. Every time." 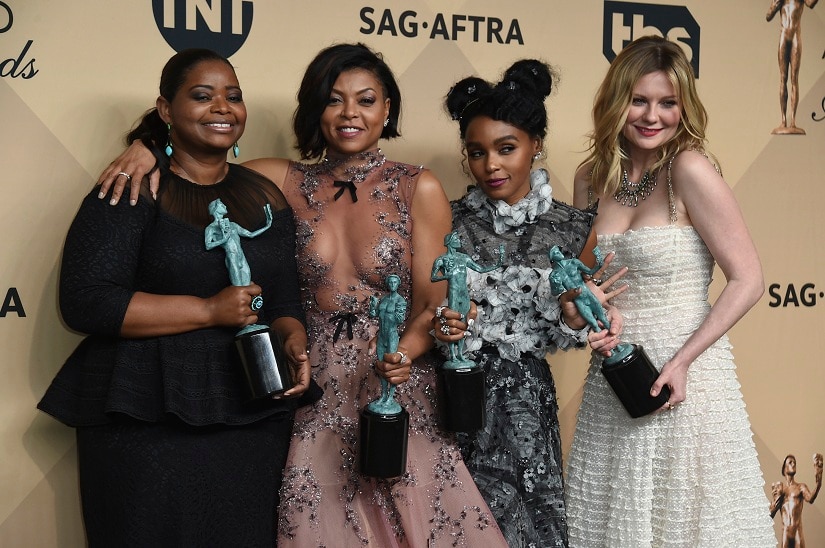 Octavia Spencer, from left, Taraji P. Henson, Janelle Monae, and Kirsten Dunst pose in the press room with the award for outstanding performance by a cast in a motion picture for 'Hidden Figures' at the 23rd annual Screen Actors Guild Awards at the Shrine Auditorium & Expo Hall on Sunday, 29 January 2017, in Los Angeles. AP Photo

It was a surprise win for Hidden Figures. With the Oscar front-runner La La Land (which took the Producers Guild Awards' top honour on Saturday) not nominated in the category, most expected a contest between Moonlight or Manchester by the Sea. Such a result could now mean Hidden Figures is the strongest challenger to the La La Land dominance, or, perhaps, that none of the three films will be able to muster enough to topple the song-and-dance juggernaut.

Yet if Damien Chazelle's musical is to go on to win best picture, it will be just the second film to do so without a SAG ensemble nod in the category's history. Only Mel Gibson's Braveheart managed it in 1996.

But such Oscar handicapping — usually the prime drama at the SAG Awards — largely took a backseat to politics on Sunday. (That is, with the possible exception of Denzel Washington's surprise win over Casey Affleck.) Whichever film ultimately triumphs at the Oscars, it seems assured of being dwarfed by the growing off-screen clamour. 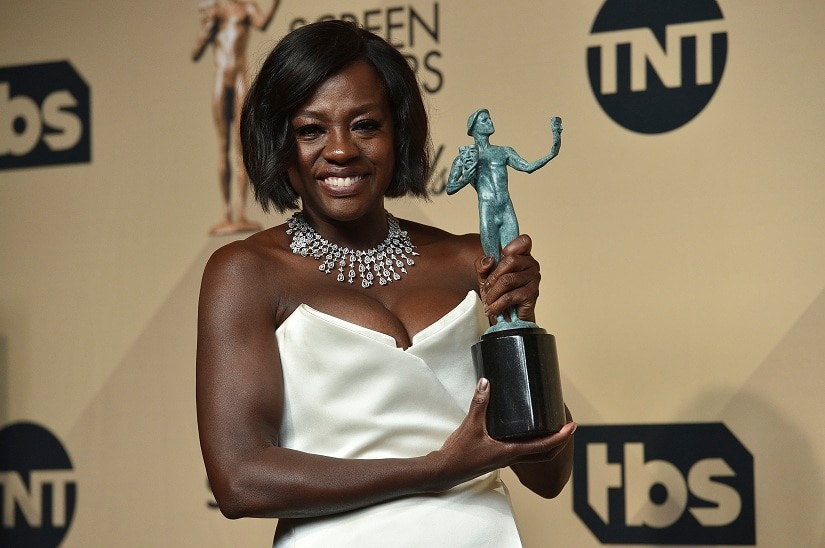 Viola Davis poses in the press room with the award for outstanding performance by a female actor in a supporting role for 'Fences' at the 23rd annual SAG Awards. AP Photo

The immigration ban has already altered the Academy Awards. On Sunday, the revered Iranian filmmaker Asghar Farhadi, whose A Salesman is nominated for best foreign language film, said he would boycott the Oscars, even if he was allowed to travel for them.

Julia Louis-Dreyfus, who added another honor for her performance on the political satire Veep, said she was the daughter of an immigrant who fled religious persecution in Nazi-occupied France.

"Because I love this country, I am horrified by its blemishes," said Louis-Dreyfus. "And this immigrant ban is a blemish and it is un-American."

Perhaps the most moving speech came from Mahershala Ali, who won best supporting actor for his acclaimed performance in Barry Jenkins' coming-of-age portrait, Moonlight. Ali said the film, about a shy, gay Miami boy's hard life, held lessons of acceptance. "We see what happens when you persecute people," Ali said. "The fold into themselves."

Ali said his own relationship with his mother exemplified tolerance. The son of a Protestant minister, Ali converted to Islam 17 years ago.

"We put things to the side," Ali said of their differences. "I'm able to see her. She's able to see me. We love each other. The love has grown. That stuff is minutia. It's not that important." Denzel Washington picks up the award for outstanding performance by a male actor in a leading role for 'Fences' at the 23rd annual SAG Awards. AP Photo

Ali was among the several Oscar favorites who cemented their front-runner status, including best-actress winner Emma Stone for La La Land and best-supporting actress winner Viola Davis for Fences. But best actor went to Davis's co-star (and director) Washington for his performance in the August Wilson adaptation. Most expected the award to go to Affleck, apparently including Washington himself.

"I'm a God-fearing man," he said, still shaking his head as he reached the podium. "I'm supposed to have faith, but I didn't have faith."

The most blistering speech was by David Harbour, who led the cast of Netflix's Stranger Things — another big surprise winner — on stage to accept best ensemble in a TV drama series. "We will hunt monsters," Harbour vowed in lengthy remarks that drew a standing ovation.

The hit Netflix series Orange Is the New Black won best ensemble in a comedy series for the third straight year.

"We stand up here representing a diverse group of people, representing generations of families who have sought a better life here from places like Nigeria, the Dominican Republic, Puerto Rico, Colombia, Ireland," said star Taylor Schilling, while a cast member added "Brooklyn!" ''And we know that it's going to be up to us and all you, probably, to keep telling stories that show what unites us is stronger than the forces that divide us." 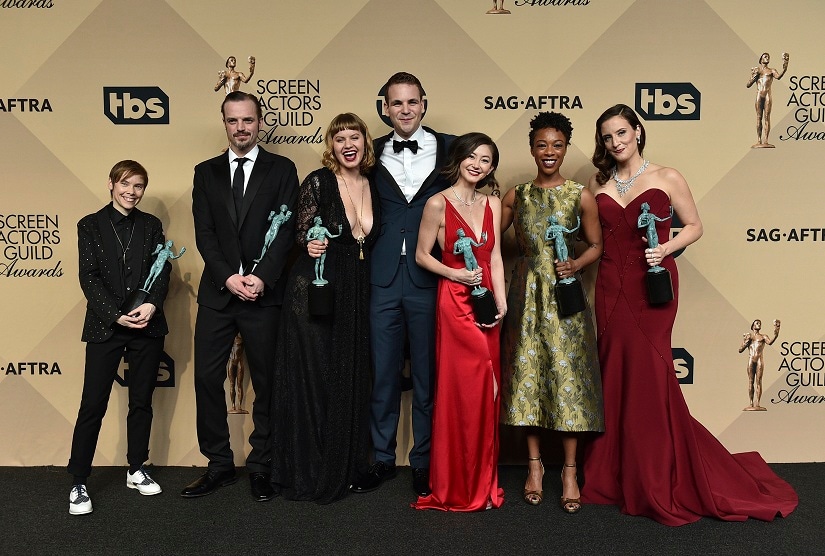 Abigail Savage, from left, James McMenamin, Emily Althaus, Alan Aisenberg, Kimiko Glen, Samira Wiley and Julie Lakepose in the press room with the awards for outstanding performance by an ensemble in a comedy series for 'Orange is the New Black' at the 23rd annual SAG Awards. AP Photo

Lily Tomlin was the lifetime achievement honoree on Sunday. The 77-year-old actress gave a warm, rollicking speech that dispensed both drinking advice and regret over wasting "a lot of time being ambitious about the wrong things."

"Did you hear? The Doomsday Clock has been moved up to two and a half minutes before midnight," said Tomlin. "And this award, it came just in the nick of time." Jim Parsons poses in the press room with the awards for outstanding performance by a cast in a motion picture for 'Hidden Figures' at the 23rd annual SAG Awards. AP Photo

Actor in a movie or miniseries: Bryan Cranston, All the Way

Actor in a drama series: John Lithgow, The Crown

Actress in a drama series: Claire Foy, The Crown 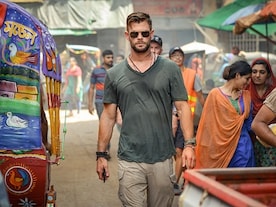