Robin Wright on life after House of Cards, being typecast as an actor, and turning to direction

With her cold gaze, steely demeanour and impeccable power dressing, President Claire Hale took centre stage in the farewell season of House of Cards. After scheming, lying, double-crossing, and even killing, her way into the Oval Office, Robin Wright's modern-day Lady Macbeth proved to be far more devious and ruthless than her late husband, Frank Underwood. Robin Wright in a still from House Of Cards Season 6. Netflix

Kevin Spacey's unceremonious exit from Netflix's ground-breaking political drama was, if anything, convenient as the storyline shifted its focus from one conniving Machiavellian power-player to the other. For six seasons, we saw the Underwoods orchestrate their ascent into the executive position by manipulating their allies and adversaries in Washington's abrasive political atmosphere.

Now, after the show's eight-episode conclusion, Wright looks to take a break from acting to step behind the camera and showcase her directorial talent. "Finishing House of Cards and having got a taste of directing, I don't feel like an actress right now and I am seeking out things to direct (rather) than act right now," said the 52-year-old actress during an interaction at Netflix's See What’s Next Asia content showcase in Singapore. “It's like eating Indian food for 35 years. Sometimes, you want to try Mexican. I have been acting since I was 16 and I have enjoyed it. Now, I want to explore something new.”

Born in Dallas and raised in San Diego, Wright came to international attention with her breakout role as the strong-willed Buttercup in The Princess Bride (1987) and her Golden Globe-nominated performance as the troubled Jenny Curran in Forrest Gump (1994). However, she got pigeonholed into certain types of role — be it the bohemian love-interest (Forrest Gump, A Home at the End of the World) or the beleaguered wife/mother (Unbreakable, The Pledge, Breaking and Entering)  — for a large part of her career.

But House of Cards changed everything for Wright. "It opened a lot of doors, and I think, being able to play that fierce female character, is why I got Wonder Woman and Blade Runner (2049). I had been typecast for so many years in this industry as the quiet, wounded, understanding wife. I think Claire made casting directors go, 'Wow, I didn't know she could do that!' Well, I’ve always been able to do it, you just didn’t let me," she says. Claire will surely be remembered as one of the most fascinating anti-hero/ines in longform TV history as Wright played the character with an icy perfection and a don't-mess-with-me attitude.

With her current directorial ambitions, six years on the set of House of Cards gave her the best film school education she could have hoped for.

“I learnt how to be a director on that show. And I got schooled in cinema because we had some seasoned crew members on our show. Our camera operator has been in the business for 42 years and has worked with Oliver Stone, Michael Mann and (Martin) Scorsese. He taught me how to look through a lens, always teaching me something with every episode that I directed. He would give me homework: 'Go watch this film and tell me why Michael Mann used that lens? Why did he use that shot in that scene? Why did he focus on that actor during that dialogue?'"

The night before she made her directorial debut with Episode 10 of Season 2, a "petrified" Wright called up David Fincher, who directed the first two chapters. And the Gone Girl director gave her some vital advice to shake off her first-time jitters. "He gave me the greatest lesson on how to be a director. He said, 'Every scene, you have to create a fraction — (by dividing) behaviour over time. Every thing you’re looking at, it doesn’t matter how wide you are. What is the behaviour going on in the room? That is more important than the amount of time you stay. So you can stay in that wide shot for three solid minutes if you’ve got ample behaviour going on. If you don’t, then cut out quicker.'" 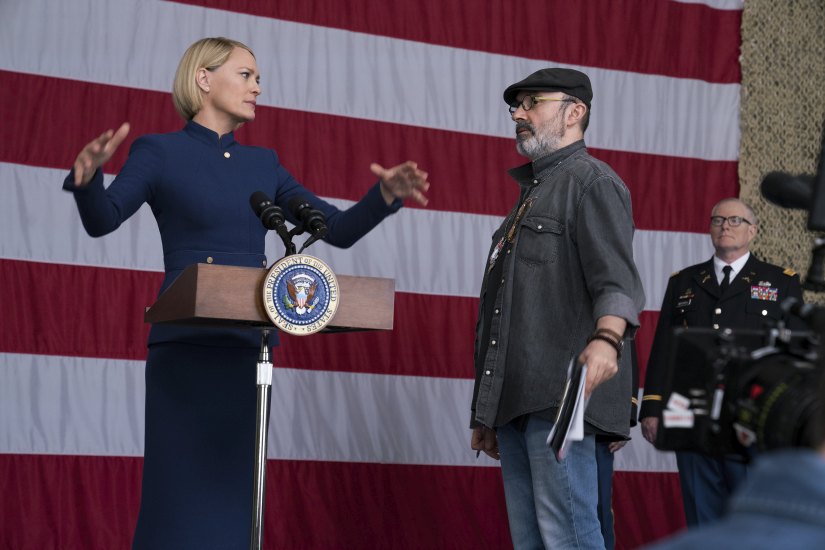 Robin Wright says she learnt how to be a director on House of Cards. Netflix

Fincher, who served as an executive producer for the show, effectively established the aesthetic, tone and style of House of Cards by directing the pilot. "On the show, we have a very particular style that David Fincher created and you can't use certain lenses. We can't use steady cams or handheld (cameras) or certain colours. We never use the colour red," said Wright, before admitting, "But it was great having those restrictions because you had to work within the frame of what Fincher laid down for us.”

Her stints as a director also made her realise just how much more complex and multifaceted the craft was compared to acting. "In the beginning, it was daunting because I actually believed I was sailing the ship. Being a director is actually the antithesis of that. When you're an actor, you're sailing that ship with that character. But, as a director, you are dependent on all of the other departments and we are all architects of that building — the production designer, the casting department, the props department. Having every department head be a part of your vision, you realise they're all making the film with you together.”

Other than Fincher, Wright has worked with many noted directors in her career from Rob Reiner (The Princess Bride), Robert Zemeckis (Forrest Gump, Beowulf, A Christmas Carol), M. Night Shyamalan (Unbreakable) to Patty Jenkins (Wonder Woman) and Denis Villeneuve (Blade Runner 2049) more recently. "You learn something from every director you work with. There are things you would like to emulate and there are things you would never do. And I have been in this business for 35 years and there’s a lot of intel that you download.”

But she is particularly effusive about the Oscar-winning filmmaker Anthony Minghella, with whom she worked on Breaking and Entering. "He was the safest, most trustworthy storyteller. He was a poet so, he knew how to bring you in as an artist. And he didn’t just give you active verbs and adjectives to play, like, 'Could you be more incredulous in this take?' He didn’t do that. He would talk you through a story that would help you embody that moment...He was so emotionally connected to the story he was sharing with you. He had a beautiful, inclusive nature." In the year since sexual assault allegations surfaced against Harvey Weinstein, Spacey and co, the #MeToo and #TimesUp movements have caused a seismic cultural upheaval. They have started conversations around abuse, power and — the systemic and pervasive — gender inequality across the entertainment industry. But Hollywood still has some soul-searching to do when it comes to female representation behind the camera. “It is necessary at this time to break this shell. And to break convention, the only thing that works is repetition. So, we must continue to put ourselves out there and insist that we are up for the same role as a director," says Wright, who claims to have recently lost a "big studio" film to an established male director. "I think they were just like, 'Oh, we didn’t want to give the movie to the rookie.' Well, the rookie’s going to keep banging on that door until they let me prove myself. And yes I’m learning, and yes, I’m less skilled and I haven’t had as much time under my belt. But I'm only going to get better as you let me do it more."

Despite the pressure of having to take over lead duties as the Commander-in-Chief in the swansong instalment of House of Cards, Wright still yearned to return to the director's chair for the series finale. After the "bittersweet" wrap and a late night party featuring a disco ball, a karaoke machine and plenty of hugging and crying, the show's producers asked her if she wanted to take home a memento from the set. "There were two paintings of ships that looked like they were mirroring each other and going in different directions. They were ships passing in the night and I took that because it was so metaphorical. This ship is sailin’ on, and we’re waving to each other and saying, 'Goodbye, it was a great ride.'"

And Robin Wright sure is sailin' on...ready to embark on a whole new journey.