In a scene from Rajesh Khanna’s Souten(1983), Rukmani, the daughter of a wealthy Indian man living in Mauritius excitedly approaches Shyam (Rajesh Khanna). “Chalo tumhe mummy ne bulaya hai,” she declares to which Shyam responds “Sab khairiyat toh hai?”. This lifeless exchange of itineraries is followed by one of the strangest songs in Hindi cinema’s history that would also later hint at a rather ponderous, often undefinable relationship between Indian cinema and our food habits. “Shayad meri shaadi ka khyal dil mein ayaa hain/ isiliye Mummy ne tumhe chai pe bulaaya hai,” Rukmani sings, rather too eagerly. Of course, the chai-meeting is a disaster, but the invocation of a common domestic habit as some sort of defining metric for territory unfamiliar to both the protagonists and the audience, the song heralded the dumbing down of musicality. Sung by Lata Mangeshkar and Kishore Kumar no less, the song began what you can call an often whimsical, mostly baffling trend of grasping comprehension via smell and taste.

In the 1987 film Hifazat, starring Anil Kapoor and Madhuri Dixit, a song invokes an eminently modest street food item that is common to the culture of Maharashtra. “Bataata vada hey bataata vada/ Dil nahi dena tha dena pada/ Bataata vada hey bataata vada/ Pyaar nahi karana tha karana pada,” the song goes. Other than the phonetic of the word, the vadaa serves no purpose in the broader diction or the context of the song, except maybe to double down on location of our story. But it points to the growing use of food as a popular language of expression, especially in cases where musicality wrapped inside poetic output felt distant. Because regional languages had begun to be challenged by the pan-India application of both Hindi and English, writers across mediums sought common metaphors to convey emotion that though it couldn’t be universally read, could at least be universally understood. It’s possibly the only argument you can make for employing a lyric that seemingly doesn’t want to do a lot semantically, other than scream a word to rhyme ‘pada’ with. 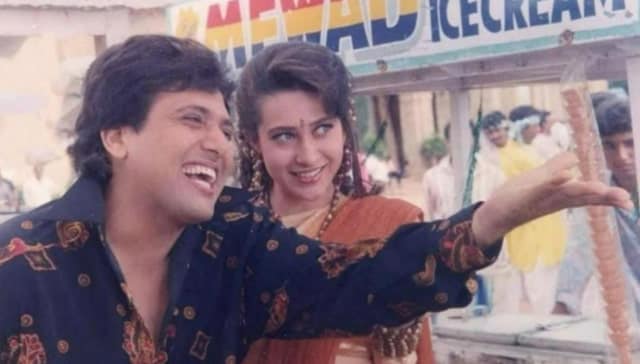 No other era possibly eulogised a condiment effectively transforming its image, the way the 90s did for ‘mirchi’. From Govinda singing “Tujhe Mirchi Lagi toh..” to Anil Kapoor dancing to “Haaye Haaye Mirche” to Zayed Khan brooding while singing “Mohabbat hai Mirchi”, lyricists reverse-translated the word ‘spicy’ to fit the bracket of desi comprehension by sexualising, often sensualising chillis. Words like sexy, patakha, hottie etc were beginning to the enter the Hindi film lexicon but the variable use of mirchi to signify lust, sexuality and often a perverted male gaze can be seen littered across films of the 90s. The emergence of text messaging over mobile phones possibly implied the search for metaphors that echoed a certain directness, an immediacy if you will, of conveying the most complicated of feelings without using language that seemed blunt or un-ironic. Allusion is how Indians have always communicated, which means our consumption of food, its many tenors, became a supplementary language in themselves.

Anu Malik is many things, brazen reality tv judge, oddball middle-age uncle, but he has also in the midst of the roaring 90s orchestrated a somewhat coupe of dumbing down language. From “Garam chai ki pyaali ho” to “Jab Tak Rahega Samose Mein Aloo/Main Tera Rahunga Oo Meri Shalu”, Malik ushered in an era of literary dismemberment, replacing the poetic depths of yore, with working-class symbols of sense and smell. These songs can’t be played on repeat over the weekend, but they do echo the earthiness of the street, a de-beautification of the love song if you like. The problem is, love is meant to be poetic, heavenly and possibly inaccessible in some sense for it to be cinematic. But you can at least see where Malik was coming from – other than a chai plus samosa session of course.

Food has a classist identity in a country of rife with malnutrition and obesity. But there is a certain universality to our street food, that translates into a nostalgia of sorts. It’s probably why paneer and milk haven’t made it do our music yet, because they are quite simply, inaccessible to a huge proportion of the population still. Not to mention they do not attest to a sense of adventure one associates with spice aka mirchi or street-side snacks like battata vada and samosas, that are as thrilling as they are risque. The 90s, let’s not forget, ushered in an elitist food revolution as well, sending urban Indians towards burgers, pizzas, salads and pastas. This was possibly the working class person’s way of fighting back – an inelegant, horrifically lyricised ode that made a messy sandwich of love, lust and some of the best Indian food that is as delicious as it is potentially deadly. But then what form of love isn’t?