The poster of Priyanka Chopra's first Marathi production Ventilator has been unveiled.

The actress, who has stepped into production with her Purple Pebble Pictures production house, took to Instagram to share the first poster with her fans and followers.

On Wednesday, the actress shared the audio of the first two songs from the film on Twitter. The songs 'Ya re ya' and 'Jai Deva' are both Ganpati songs.

Priyanka is not only making a guest appearance in the film but also lending her voice for a song.

A Mumbai Mirror report quotes, “Priyanka is looking forward to recording the song, however, she is yet to zero down on the track she will sing. It is most likely to be used as a promotional track but could be included in the narrative too. She’s currently working out dates for the recording as well as the rehearsals.”

The film will have several veteran Marathi film and theatre actors. The film is directed by Rajesh Mapuskar, who previously directed Ferrari Ki Sawaari starring Sharman Joshi and Boman Irani. 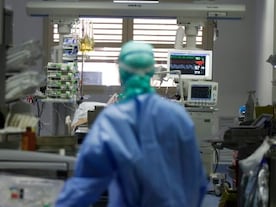