Hollywood needs the world’s help to survive right now. The massive influx of popcorn movies set in China, Russia, and India tells us this; international box offices are more important to an American film’s financial health than detailed character development, or fluid dialogue. The last Mission Impossible film, 2011’s Ghost Protocol, for example, managed to cram in – not one – but two of those countries in 133 minutes, and still find time for a grizzled, middle-aged Tom Cruise to brave a sandstorm in Dubai. But underneath that cheery veneer of globalization lurks the unpleasant aftertaste of a pro-Western, neo-liberal ideology that has the quiet power to dehumanize and deceive with an audacity that would’ve shocked Edward Said. Perhaps no recent example of this trend fits better than Alfonso Cuarón’s recent blockbuster, Gravity.

Gravity opens with a shot of planet Earth from space, Hollywood’s target audience. Quickly, we are introduced to the only characters who matter in this world, a cutesy white female, “Ryan Jones”, played by Sandra Bullock, and the white, ever-grinning “Matt Kowalski”, played by megastar George Clooney, as they perform some lazily-described duties outside of their space shuttle, Explorer. A third character is also working outside the shuttle, but we don’t get to see his face. His name is only given as “Shariff”, and we are granted a vague signal that he’s supposed to be Indian. We know this primarily because Shariff sings the classic Hindi film song, “Mera Joota Hai Japani” – to himself. 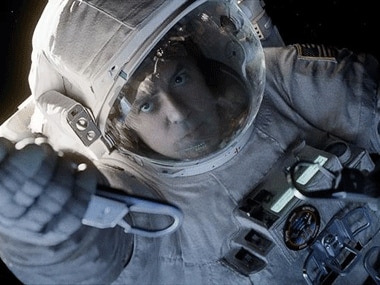 Shariff is essentially a happy buffoon. Unlike the more disciplined American astronauts Kowalski and Jones, Shariff can’t help but bounce around in zero gravity like an idiotic fool, singing and dancing away. He speaks in an exaggerated Indian lilt, and isn’t even given the opportunity to interact with any of the lead characters in any formal or direct way during the course of his brief time on screen as a floating body. “He went to Harvard,” quips Clooney’s Kowalski with an eye-roll toward his Indian colleague, undercutting his accomplishments.

A streaming belt of debris, which, technically speaking, serves as Gravity’s only antagonist, strikes Shariff, silencing his inane stream of singsong and chitchat by what feels like the seven minute mark of the film. The two central characters then save themselves from disaster, and return to the shuttle with the intention of rescuing their floating brown colleague. It’s in this moment that Shariff’s face is introduced to us for the first time: for a brief second, we see a red, mangled hole, not unlike the vaginal-looking wounds from David Cronenberg’s classic sci-fi film Videodrome. It’s ‘thank you, come again’, and just as inconsequentially as he arrived, Shariff is gone.

But amazingly, these racial character dynamics in Gravity are not as uncomfortable as its weak central themes. Anyone born east of Greece should be forgiven for failing to comprehend the critically lauded “spiritual” side of the film. And there’s a good reason for that: none of it really makes any sense. The first pseudo-spiritual moment arrives as Kowalski floats off into deep space, preparing to die. He spreads his arms out in a ludicrous gesture of acceptance before uttering the words: “You should see the Ganges from up here. It’s shimmering!”

When I saw Gravity at the PVR Oberoi cinema in Goregaon East last Saturday night, the Bombay audience laughed uproariously at Clooney’s delivery of the line. If only Cuarón could have heard their reaction: For one thing, if the Ganges shimmers now, it does so only because of pollution. But beyond that, the invocation of an idealized India seemed strangely out of place given the urgency of the moment at hand. What calming influence could dreams of “Incredible India!” have over a man who is about to slowly suffocate to death? Clooney is given a taste for Eastern spiritualism without ever having had to earn it though backstory, or character development. Imagine the roles reversed for a moment: How laughable would it have been if Shariff had survived long enough to praise the Mississippi River at the moment of his demise?

Another invocation of this same kind of half-baked Eastern spiritualism arrives when Bullock’s Stone escapes in the Shenzhou, a capsule launched from a Chinese space station. A statue of a grinning Buddha greets her there. And as the capsule’s metal shell disintegrates and bursts into flames entering Earth’s orbit, Cuarón repeatedly cuts to the Buddha, using it as a calming, stabilizing reference point for both Stone and us throughout the tense action. This is a far cry from the moment when a Buddha statue is broken in a fit of rage and miscomprehension during Harold Pinter’s 1960 drama The Caretaker. Stone, a character who at one point makes the absurdly silly claim that “no one taught her how to pray”, is granted a fast-food delivery of nirvana in her time of need. Never mind how strange it is that a religious symbol would even be on display in a spacecraft owned by the anti-religious communist state of China.

Cuarón, it should be noted, is a Mexican filmmaker, which certainly complicates his status as a purveyor of neo-liberal, Western propaganda. But once you strap on those 3D glasses, Hollywood is always Hollywood in the end. One needs to look no further than the legions of Indian critics who have accepted Gravity’s shtick without questioning it to understand that the ideology at work here doesn’t need to lurk behind a pair of stereotypical blue eyes to thrive.

Hollywood asks the world to accept three ugly things during Gravity in its bid for international box office dominance: the erasure of Shariff’s face, the appropriation of his spiritual and cultural identity, and the ultimate triumph of the Ryan Stone character: bland, drifting, and whitewashed. The reply we should be giving them in return is “no”.

Michael Edison Hayden is an American writer currently living in Mumbai. You can follow him on twitter @MichaelEHayden. Despite coronavirus lockdown, merger of 10 PSU banks to come into effect from 1 April as planned, says RBI Mega-merger of PSU banks on schedule: 6 banks cease to exist from today; experts say exercise will not be smooth, seamless Merger of 10 PSU banks comes into effect from today; 10 things you need to know about implications of govt's move