Los Angeles: Jared Leto wasn't just thinking about himself after winning the best supporting actor Academy Award on Sunday night — his thoughts veered from his mother, the populations of Ukraine and Venezuela and even the reporters who were covering his Oscar glory.

The actor-singer clutched his mother's hand as the winners were announced, and when Leto arrived on stage, he used part of his speech to briefly tell his mother's story as a single mother and high school dropout who raised her children to be creative and aspire to great things.

"She somehow she managed to make a better life for herself and her children," Leto said in his acceptance speech. "I just want to say, I love you mom. Thank you for teaching me to dream."

Leto also mentioned those who have died with AIDS and been persecuted for their sexual orientation, as well as the people of Venezuela and Ukraine, whose countries are currently in turmoil. 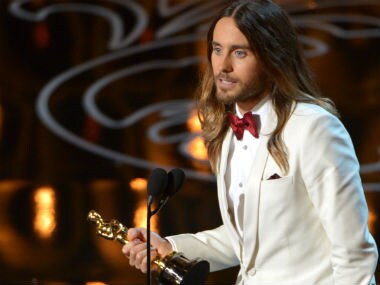 Leto won his Oscar for his role as Rayon, a transgender person dying of AIDS, in Dallas Buyers Club. It was his return to acting after a several-year hiatus.

Moments after his win, Leto stepped backstage into a room full of reporters and continued to think of others, repeatedly thanking his publicist and then asking if anyone wanted to check out his Oscar up close. Some people did, and Leto handed it to a woman transcribing interviews. The statuette made the rounds, being handled by several people seated directly in front of the actor-musician.

"But if you have swine flu, please don't touch it," Leto joked.

He even encouraged reporters to take a "selfie" with the statue before an Academy official stepped in and reminded reporters that no photography was allowed backstage. "You guys want to get media, let the media do what they do!" Leto protested, to cheers from many in the room.

Asked why Leto felt it was important to feature his mom so prominently in his speech, he replied, "I thanked my mother because she is everything. She's inspired me in ways that I could talk about for days."

Leto, who also brought his brother and 30 Seconds to Mars bandmate, said he felt it was important to mention Ukraine and Venezuela because of the upheaval in both countries.

"You have an opportunity when you stand on the stage — you can make it about yourself or you can hold up a mirror and shine a light. And that's what I chose to do tonight," Leto said.

He said his band has a show scheduled in Ukraine in a few weeks and recently played Venezuela, so events in those countries remained in his mind.

While Leto was feeling altruistic, he took time to reflect on his own good fortune and promised reporters that he planned an epic celebration. "I'm going to be celebrating until the break of dawn," Leto joked. "If they only knew what was going to happen tonight."

With his Oscar statuette still making the rounds, Leto address how surreal his win still felt.

"I never ever in a million years dreamed that I would be here right now, talking to you. It wasn't even a fantasy of mine because it was so far-fetched. I would have never thought that they would give me any prize — I never won an award for anything I did on screen until I did 'Dallas Buyers Club,'" Leto said.

Leto left the room, expressing another round of gratitude.

"Thanks for getting my Oscar dirty with your fingerprints," Leto said