As the 89th Academy Awards — or the Oscars 2017 — kick off at the Dolby Theatre in Los Angeles (Sunday night, 26 February, in the US and Monday morning, 27 February for us folks in India), we're bring you LIVE updates

And the Oscar for Best Picture goes to Moonlight

Here are the nine nominees in the running:

...And the winner is: Moonlight

...And the winner is: Emma Stone for La La Land

Casey Affleck, Manchester by the Sea

...And the winner is: Casey Affleck for Manchester By The Sea

Kenneth Lonergan, Manchester by the Sea

...And the winner is: Damien Chazelle for La La Land

...And the winner is: Barry Jenkins for Moonlight

...And the winner is: Kenneth Lonergan for Manchester by the Sea

...And the winner is: Justin Hurwitz for La La Land

...And the winner is: Linus Sandgren for La La Land

...And the winner is: The White Helmets

Oscar for Best Visual Effects goes to The Jungle Book

Kubo and the Two Strings

...And the winner is: The Jungle Book

Fantastic Beasts and Where to Find Them

Kubo and the Two Strings

My Life as a Zucchini

...And the winner is: Zootopia!

...And the winner is: Piper

...And the winner is:  Asghar Farhadi for The Salesman

Michelle Williams, Manchester by the Sea

...And the winner is: Viola Davis for Fences

...And the winner is: Kevin O'Connell and Andy Wright for Hacksaw Ridge

...And the winner is: Sylvain Bellemare for Arrival

The Oscar for Best Documentary Feature goes to OJ: Made In America

I Am Not Your Negro

OJ: Made in America

...And the winner is: OJ: Made In America

Fantastic Beasts and Where to Find Them

...And the winner is: Fantastic Beasts and Where To Find Them

Oscar for Best Makeup and Hairstyling goes to Suicide Squad

...And the winner is: Suicide Squad

These were the nominees:

Lucas Hedges, Manchester by the Sea

​Kimmel started off his monologue with talking about the current political situation in the USA. He said, "I know you guys want me to say something, but I can do nothing to unite us." "There is only one person in the room that can unite us, and that braveheart is going not going to help us," he said pointing to Mel Gibson, and added, "Scientology is looking good on you."

Kimmel also said that Matt Damon has been very selfless, as the producer of Manchester By the Sea, he could have cast himself in the lead. But chose not to.

He also had very kind words for Meryl Streep:

"One actress has stood the test of time with her many 'average' performances [sarcasm] — this is Meryl's 20th Oscar nomination!" he said, to a standing ovation from the crowd.

Accident at the Dolby Theatre just before Oscars start

Support for the ACLU on the red carpet

These Oscars were going to eb a political event — seeing the trend over the award season this year — and sure enough, there were several celebrities who sported blue ribbons on the red carpet in support of the ACLU (American Civil Liberties Union).

Order in which the Academy Awards will be announced

If you were wondering which category would be announced when — here's a complete schedule:

A fascinating statement has been issued by the five filmmakers nominated in the Best Foreign Language Film category. They've strongly condemned the culture of 'fanaticism and nationalism we see in the US'.

1. Martin Pieter Zandvliet (Land of Mine)

The controversy reared its head again, when Casey walked the red carpet. Read an analysis of it here on Firstpost.

And she's here! Priyanka Chopra — also on-trend in a structured white gown and slicked back hair — has walked the red carpet. .@BandryBarry on Best Picture for "Moonlight": "Even in my dreams this could not be true. But to hell with dreams." https://t.co/bkJCcIs2Vw pic.twitter.com/olyJ2OD5FV 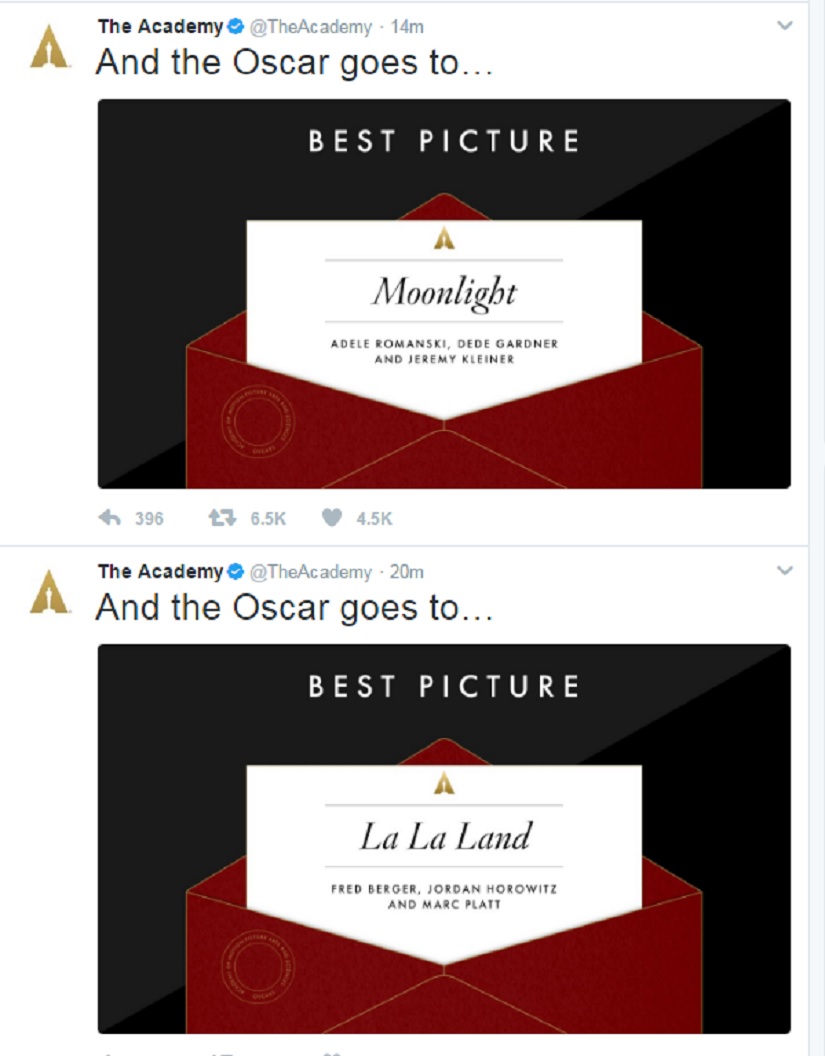 WATCH: Moment where crew/cast of 'La La Land' realizes a mistake had been made and 'Moonlight' actually won Best Picture. #Oscars pic.twitter.com/WCCopwsJ66

This was a ceremony were the Oscars ALMOST redeemed themselves. I now look forward to Trump tweeting about how the goof up was FAKE NEWS and BAD. Cheers!

Final word: Oscars 2017 was a great show. Jimmy Kimmel was funny, the Kimmel-Damon rivalry was the highlight, La La Land probably didn't deserve some of the awards it got, and Warren Beatty needs new glasses.

Here's the complete list of winners at the 89th Academy Awards. La La Land is — despite the Best Picture gaffe — taking home no fewer than five golden statuettes from the Oscars 2017.

The moment when the Best Picture goof-up happened:

THIS IS NOT A DRILL. #Oscars pic.twitter.com/BZazzgb5bC

The big award for the night was marked by a major goof-up as La La Land was first announced Best Picture winner. However, even as the team came on stage to take their award, presenter Warren Beatty realised that he had been handed the wrong envelope (he had Emma Stone's Best Actress note) and corrected himself. Moonlight was then announced as the winner for Best Picture. 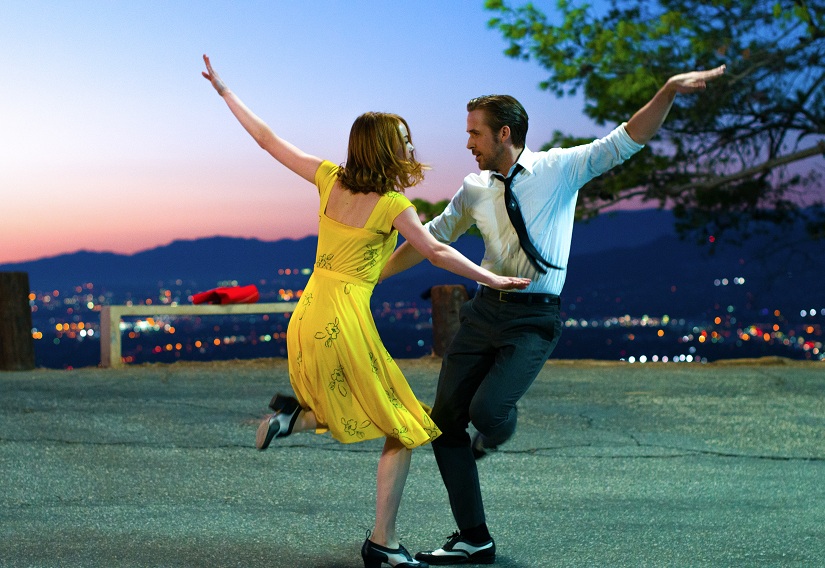 And the Oscar for Best Picture goes to Moonlight

Here are the nine nominees in the running:

...And the winner is: Moonlight

In the pantheon of award shows that honour cinema the world over, there are few that match up to the Oscars in terms of glamour, hype or scale.

And as the 89th Academy Awards — or the Oscars 2017 — kick off at the Dolby Theatre in Los Angeles (Sunday night, 26 February, in the US and Monday morning, 27 February for us folks in India), there's plenty of excitement over how the ceremony will play out.

Will La La Land pull off a landslide sweep across all the major categories it's been nominated in? Will Emma Stone lift the coveted golden statuette as Best Actress? Will it come down to a Denzel Washington vs Casey Affleck fight for the Best Actor in a Leading Role prize? Will Dennis Villeneuve or Damien Chazelle earn the Best Director honour?

We've got some desi interest in the proceedings as well. Priyanka Chopra will be walking the red carpet; she announced her presence with an Instagram photo along with Sir Mick Jagger, which really had us wondering if they have some sort of joint performance/presentation at the Oscars 2017 ceremony. Then there's Dev Patel, who has a Best Supporting Actor for his role in Lion. Oscars 2017: Who will take home the coveted golden statuette?

If Patel has many expectations riding on his lean shoulders, so too does first-time host Jimmy Kimmel. Kimmel follows a tough act in the form of last year's host Chris Rock, who roasted the Academy over the #OscarsSoWhite controversy to great effect. Then there's former host Ellen DeGeneres, who has set the bar pretty high with her pizza-sharing, selfie-snapping ways. Kimmel had a goodish bit of experience with hosting the Emmys this year, which should stand him in good stead on the Oscars stage.

That stage could well be the spot where some pretty blistering anti-Donald Trump speeches are made. Meryl Streep set the tone with her Golden Globes acceptance speech, and Stranger Things star David Harbour and a host of other actors followed it up at the Screen Actors Guild (SAG) Awards. Who will get the loudest applause?

And of course, when talking of applause and approval, we can't leave out the slightly less serious (but no less important) red carpet fashion. There will be some beautiful gowns, natty tuxedos and several bizarre sartorial statements made — there's no doubt.

And we'll be keeping you posted on every little detail, minute-by-minute.