Nana Patekar's NGO Naam Foundation has filed a defamation suit worth Rs 25 crore against Tanushree Dutta after she spoke against the organisation at a press event in January, writes Mumbai Mirror.  The defamation case against Dutta comes at a time when Hollywood mogul Harvey Weinstein faces a 23 year prison term for rape and sexual assault.

The Bombay High Court has now forbidden Dutta from making any allegations or remarks against the NGO. Mirror reports the NGO was granted relief by Justice AK Menon since neither Dutta nor her lawyer was present during the court proceedings.

The petition filed by the NGO states remarks made by Dutta "caused enormous damage to the foundation’s reputation." The NGO claims Patekar and Makarand Anaspure have been working for the betterment of farmers in drought affected areas.

Justice Menon did not refute Naam Foundation's claims but noted allegations against the NGO by Dutta were "defamatory." The court further said there were no indications of the NGO being a "fly-by night operator."

"That pending the hearing and final disposal of the present suit, this Hon’ble court be pleased to restrain the defendant (Tanushree Dutta) from further publishing or using in any way the said defamatory press conference or its contents to the plaintiff’s reputation with respect to siphoning of funds, bribery, subverting police and judicial system, collecting funds on false pretext, improper maintaining of the plaintiff’s (Naam Foundation’s) accounts," read the court order.

Dutta told Mirror she will push for an inquiry by the Central Bureau of Investigation. She said the suit is evidence how far Patekar can go to silence her.

At the January press conference, Dutta said she had filed a plea challenging the police's closure report of June 2019. The police had told the court there was not enough evidence to prosecute Patekar for sexual harassment.

Dutta had accused the veteran actor of harassing her and misbehaving with her while shooting a song for Horn Ok Pleasss in 2008, sparking the #MeToo movement in India. 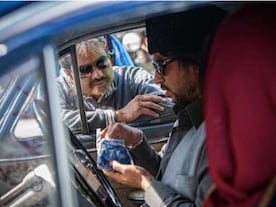