Movie Review: Ra.One is a Good.One, in more ways than one

After all the hype and aggressive marketing, and the big, quintessential Shah Rukh Khan sell, Ra.One finally opened in theatres today in both 2D and 3D formats. This review is for the 2D version of the film.

SRK plays a bumbling geek, Shekhar Subramaniam, who works in the video-gaming department of Barron Industries in London with a penchant for eating noodles with curd. He is married to an author-in-progress, Sonia, played by Kareena Kapoor and they have a bright, young son, Prateek, played by debutant Armaan Verma. Even though the two couldn’t be more different in their Shekhar and Sonia avatars, their on-screen marriage works beautifully.

Curly wig in place, SRK pulls off the South-Indian techie-look physically, but his South Indian accent comes and goes in spurts and is rather inconsistent throughout his enactment of Shekhar. What is consistent though, and very apparent, is him seeking Prateek’s approval desperately and wanting to turn into a  “daddy cool” figure in his eyes. That is what spurs him into action and the concept of a very powerful, cool and invincible villain comes to fruition in his latest video game enterprise, called Ra.One, much to the delight of Prateek.

On the day of the game’s launch, a very excited Prateek plays the game as Lucifer — his online gaming alias. Ra.One — the villian  — threatens him not to leave the game till he vanquishes him, saying if he did, he would hunt him down and kill him. Not taking him seriously, Prateek goes home, leaving his father and his work colleague, Akashi, played by Tom Wu, and Jenny, played by Shahana Goswami, to figure out the errors in the game. 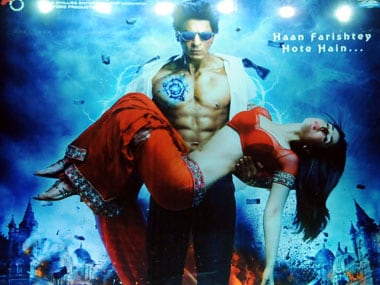 SRK’s lean frame lends itself well to his superhero antics as does his photo-shopped version of Shekhar, whose face G.One is modelled on Raju Shelar/Firstpost

This is  where the film really starts, or rather, the game begins. Ra.One, played by Arjun Rampal, takes on a dangerous life of its own outside the gaming console world and begins his hunt for Lucifer.

SRK as G.One, the Indian super hero is an original in design, form and speech, with his own mannerisms and blue body suit, and of course, the matching blue eyes. Even though the film borrows heavily from many Hollywood super heroes like Spiderman, Terminator and Knight Rider, to name a few, there are only fleeting glimpses of the same in dramatic action scenes, saving it from being some sort of Superspiderbatminator rip-off!

SRK’s lean frame lends itself well to his superhero antics as does his photo-shopped version of Shekhar, whose face G.One is modelled on. Despite being the eternal romantic hero on celluloid, SRK owns the robotic space he inhabits as G.One very convincingly. After all, he is a super star in real life and he's taken his game to the next level with super hero G.One on reel. Kareena looks stunning and plays her role just right, as one would expect an actress of her calibre and experience to.

Anubhav Sinha, the director of the film has done a marvelous job in the action sequences - they are new age and take full advantage of technological advancements in the scientific and digital world. The Mumbai local train sequence is shot fabulously. The emotional scenes, too are very engaging — despite all the digital wizardry going on in the film.

The film has its share of comic sequences, my favourite being the one where Kareena is outside the Mumbai airport with G.One and Prateek, and Rajnikanth makes a special appearance as Chitti from Robot! It is hilarious! Kareena covers her head with a scarf in absolute reverence and awe as she introduces Rajnikanth to G.One as “Super hero number one, Rajni Sir.” There are some forced gags too, like the airport guy who frisks SRK a tad too lasciviously and the opening scene of the film that has a Knight Rider-esque SRK — in “shampoo-ad” length hair as Lucifer — fighting off three Ninja girls named Uski Lee, Iski Lee and Sabki Lee, cheap thrills to say the least. After fending off the Ninjas, he takes on another baddie, Sanjay Dutt who's holding Priyanka Chopra hostage. Dutt and Chopra make special appearances in the film. Thankfully, the sequence is just Prateek day-dreaming in class at school! I'm surprised Head & Shoulders weren’t solicited for an in-film endorsement with SRK’s flying locks in the scene! Amitabh Bachchan lends his baritone in a voice-over in the film.

The screenplay is seamless and the drama and shenanigans keep you entertained throughout. Armaan Verma who plays Prateek makes a fantastic debut in the film – matching his acting skills with Kareena and SRK all the way. You actually don’t feel the over two and a half hour length of the film, with its racy pace and edgy action. The film is interspersed with some endearing emotional moments and the chartbusting Chammak Challo, Dildaara and Criminal songs.

In Chammak Challo, sung by the international singer, Akon, SRK looks like the superstar he is and it is a very welcome change, even if it's just for the duration of the song, from his blue-eyed G.One look! Kareena and SRK are fabulous together. The booty shakin’ step in Criminal, also sung by Akon, is going to be the new dance move in town.