Roshan Mathew, a trained theatre actor who debuted in Malayalam with Aanandam, is still in the process of digesting the overwhelmingly positive reactions to his character” in Moothon.

It is the first film in which he has received unanimous praise from critics. Unsurprising considering the depth and poignancy he brings to the gay and speech-impaired Ameer, who falls madly in love with Akbar (Nivin Pauly), in the film. While its box office numbers are not quite staggering, the film, written and directed by Geethu Mohandas, has been widely applauded for its sensitive depiction of a gay romance (perhaps the best we have seen in Indian cinema). We caught up with Roshan Mathew for a long chat. Roshan Mathew in a still from Moothon

Ameer, I am told, came much later into the story. Would that be correct to say?

Ameer wasn’t quite the way you see him now. Some sort of evolution happened while Geethu was making the film which stretched to over two years. They finished the Mumbai portions in the first year, and the flashback portions were rewritten later.

How did she find you?

I was doing Koode at that time, and this chap, who did the sound for that film, and was also part of Moothon, recommended my name to her. Then Geethu contacted Anjali (Menon, director). She had seen Aanandam but didn’t notice me. She later told me that within a few minutes of meeting me, she had decided on me. She summarised the whole story, and said 80 percent of the movie has already been shot. But this was a pivotal part, and (she) wondered whether I would like to be part of the film, which was a non-existent question in my head. The day Moothon was announced, I was also one of the many people who shared the posters on social media, and there she was, pitching me Moothon, and it was really cute.

Ameer is a speech-impaired homosexual person. How did you prepare for this role?

It was extremely different from everything I have done before, and to play with some sort of a restriction is always daunting and a lot of fun. So the speech impairment part was supremely exciting, and my only worry was whether I will be able to meet their expectations. What really helped was this workshop with Atul Mongia — for Nivin, Geetu, and me. More than working on the scenes and the characters, it helped us create trust and comfort between ourselves.

It seems like both of you were madly in love with each other on screen. How did this happen?

At first, we had to get over the fact that we were two people who never acted together. Then it was the question of two straight guys playing gay characters, which requires a certain amount of comfort. When it comes to love stories in cinema, you take some time off to develop that ease, and then get on with the trickier scenes. Here, we are shooting a very small schedule, and almost every scene is intense. For that, the workshop really helped. And of course, Nivin was a very easy co-star. Besides, the three of us would have these conversations. Geethu is very good with actors without getting in between their space. She also told me to watch a few films of Pedro Almodóvar and Won Kar Wai to help me get into the mood of the character. Both of us have done what we have always done as honestly as possible. What really made it work was the way it was captured, directed, and edited. Also, if you are not fully into it, it can easily slip.

What is the biggest challenge of playing a speech-impaired character?

If it works for you, it can be extremely liberating when you discover that all the other means of communication have opened up, and suddenly become powerful just because you restricted one. If it didn’t work, the risk would be that throughout the shoot, it looked like I had a handicap. It’s like learning a new language but what takes longer is to make it your own. Every person has their way of expressing it, their own characteristic of how they do signs and use their hands, but the rules are intact. Roshan Mathew in a still from Moothon

You are a trained theatre actor. How does it help in cinema?

I guess in theatre, what we have to do by default is ignore the audience, and yet be aware of them. That comes in handy when you do a film when you have to stay in the scene and ignore everything. Also, with lengthy scenes, we find it easier to stay and build on it from moment to moment. But then again, there are exceptionally good actors who have never done a play in their life before. At the end of the day its acting — the basics remain the same. One will reflect on the other.

You have finished Anurag Kashyap’s Netflix film Choked. How was that experience like?

It’s a domestic thriller, about a couple suffocating in a relationship. He works in his own world, breaks every rule in the book. Half the time, everyone is wondering how all this will come together, and be made into a film. But it doesn’t matter. He has a plan and vision that is enough. No one needs to understand what’s happening. There is no briefing — none of the conventional words fit in. I was doing a reading of the scenes before going for the shot when he said keep it away, and just come and do it. Relax. He has a script in his head. A lot of really good filmmakers in Malayalam work that way. Overthinking is counterproductive for them.

Which was the film that made you want to be an actor?

I don’t know if it’s the films that I watched that made me want to be an actor. I was impressed by my sister, who used to act in school plays. She made the whole school laugh, and I thought that was very cool. My grandfather was active in theatre. My father used to act in plays as well. He was also a huge Mammootty fan, and would watch films every weekend. Then I grew up to become a Mohanlal fan, and we followed their films together and took their brilliant performances for granted.  Maybe inspiration came that way.

And how many times have you watched Moothon?

Four times. Each time I watch it, I am less happy with what I did. I really loved the film so I thought better not watch it anymore as I might see more flaws in it. The audience has matured a lot, and the kind of films that are doing well is proof of that. Of course, there are those who still can’t differentiate between what is regressive and what is liberal. I was never scared about being Ameer. If anyone had to be scared, it was Nivin. But then he did it so beautifully. 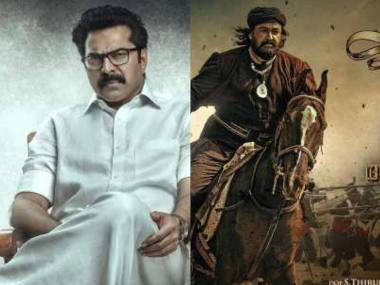