New Delhi: Congress on Thursday latched on to the comments of the censor board chief in the row over film Udta Punjab to allege that Prime Minister Narendra Modi has "covertly ensured" that it be banned or "at least neutered" to hide the scale of the drug problem there.

"Desperate to ensure that the scale of the malaise is not revealed, Modi has covertly ensured that this movie is banned or at least neutered," the AICC said in a commentary. Prime Minister Narendra Modi. Congress insisted that BJP is a coalition partner of Akali Dal and is "equally culpable" for the "inaction" of the Punjab government. AFP

It claimed that comments of Pahlaj Nihalani, chief of the Central Board of Film Certification (CBFC), showed the appointments made by the Modi government were of "partisan nature" to drive the BJP-RSS agenda.

"In an act of sycophancy, Nihalani readily admitted in an interview that he was a lackey (a chamcha) of Prime Minister.

This ... shows the integrity and partisan nature of the appointments of the Modi government."

"Institutions are being robbed of all autonomy, and being turned into agents to drive the BJP-RSS agenda and to help Modi's electoral prospects," the AICC said in the commentary posted on its website.

Titled "CBFC chief is taking orders from BJP & Akalis, who have, together, ruined Punjab", the party noted that there is drug menace in Punjab.

"This film is a fictionalised account of this problem. Drug abuse is a problem that has devastated lakhs of families in Punjab, and the BJP-SAD government has refused to acknowledge this as a major issue."

It claimed that when token action is taken, it is directed at the addicts rather than drug mafia or peddlers. "When the Congress vice-president Rahul Gandhi raised this issue in 2012, the Badal government subjected him to ridicule and abuse".

Congress insisted that BJP is a coalition partner of Akali Dal and is "equally culpable" for the "inaction" of the Punjab government.

"The BJP is scared. It is scared that it has done nothing for the people. To ensure that its own inadequacies are not made public, it is desperate to control all information being disseminated to the public, which is why they have invested heavily on social media and in advertisements," it said.

Besides, it stressed that more than blowing their own trumpet, the BJP is "systematically targeting" everyone who is talking about the many ills in our society.

"Currently, it is the controversy surrounding a movie, but under Modi rationalists have been murdered, freedoms of university students been stamped down and artists and writers forced to silence," it alleged.

At the AICC briefing, party spokesman Raj Babbar took a dig at Nihalani for his controversial comments.

"It seems that Modi government is a government of chamchas (lackeys)," he remarked. 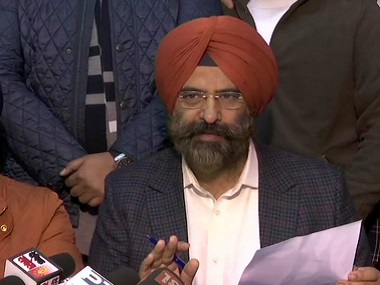