Marvel Studios president Kevin Feige, who launched the studio's money-minting franchise Marvel Cinematic Universe (MCU), is set to make his acting debut with an upcoming episode of The Simpsons.

The episode, titled Bart the Bad Guy, will see Feige voice the character of Chinnos, a parody of MCU's dreaded supervillain Thanos. Thanos was voiced by Josh Brolin in the MCU, including its two big blockbusters -- Avengers: Infinity War and Avengers: Endgame.

Our kids grew up on @TheSimpsons, and frankly, so did we. What an incredibly surreal process to record, nonetheless see ourselves as a part of this amazing world. Tune in this Sunday at 8PM on @FOXTV. We have to save the popcorn farmers at all costs... #ChinnosDemandsYourSilence pic.twitter.com/X0BUK09zh3

Other guest stars for the episode include Endgame directors Anthony and Joe Russo and actor Cobie Smulders, who plays Mariah Hill in the MCU. Smulders' husband Taran Killam and Youtuber Tal Fishman will also guest star.

While Feige’s character promises that his phone’s “doomsday app” will allow him to wreck all sorts of havoc, as the episode’s title suggests, Bart Simpson is shaping up to be the big bad.

According to Variety, Bart the Bad Guy will follow Bart who accidentally sees a new installment of the popular "Vindicator" superhero movie franchise before it comes out. Armed with spoilers, he's now the most powerful kid in all pop culture. And Bart being Bart, he leverages that power to become his own kind of super-villain: "Spoiler-Boy."

Enter the heroic movie executives (voiced by Russo Brothers), who attempt to save the day and prevent Bart from using those plot-spoiling powers to ruin the surprise.

The episode will air on Sunday, 1 March on Fox 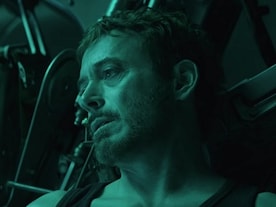