Farhan Akhar's portrayal of the lead vocalist-guitarist in the 2008 film Rock On is one of his most memorable characters. His character in Lucknow Central, a film about escape from jail, also has a rock star avatar, but of a very different type: the kind that grew up in a small town with big ambitions. 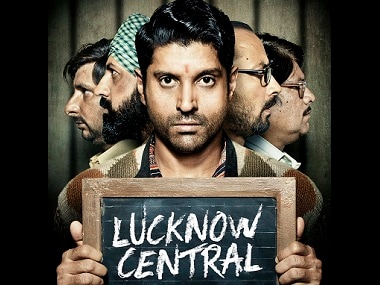 In the trailer of the film, Akhar, in his characteristic husky voice with an added-on accent, talks about his ambitions to start a band. You can tell how ambitious he is, in a shot where he tells his father, "Sheher chhote hote hai, sapne nahi".

Cut to a scene where he is found guilty of murder, which he says he has been wrongly blamed for. You truly want to sympathise with his character as he is dragged to Lucknow Central jail, to be hanged eventually.

Now, Akhtar's character reshapes his ambitions to start a band, instead using this as a ploy to escape from the jail, with support from other prisoners. But there's also a twist in the plot; will his need to escape be overshadowed by his passion for music? This is encapsulated in the film's subtitle "Plan kuch aur hai".

The antagonists of Lucknow Central are menacing to say the least, whether it is Ronit Roy 'welcoming' Akhtar to the jail or the shot where the politician cuts a cake with a sword. The film also makes political comments through dialogues such as, "Sarkar bhi paanch saalon mein badal jaati hai, yeh toh jail hai."

The film's look has been compared to the Arjun Rampal-starrer Daddy, which is a film on Arun Gawli, and its plot bears resemblances to Qaidi Band, which is about undertrials given the chance to start a band in jail.

Recently, two new posters of the film were released.