Kollywood films are clamouring for holiday weekend releases over August-September, leading to chaos

The month of August and September is going to witness a 'release rush hour' in Kollywood. As per trade sources, over about nine weekends — 4 August to 29 September — roughly 40-45 Tamil releases, big and small, will hit the screens. It will be total chaos at the box-office as everybody fights for screen space. 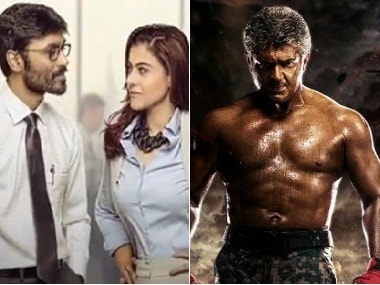 VIP 2, Vivegam are among the Kollywood films releasing during this period. Images via Twitter/File Photos

One of the most popular Tamil actors, Thala Ajith's Vivegam was due for release on 11 August, the Independence Day weekend. But due to late certification and plans to release it simultaneously in Telugu, its theatrical release has now been pushed to 24 August. This is the Vinayaka Chaturthi (Ganesh Chaturthi) weekend, and other producers in Kollywood will not release their film their films in the same week as a biggie (read Rajinikanth, Vijay or Ajith films).

So with Vivegam pushing its release date from 11 to 24 August, the Independence Day weekend opened up. Dhanush’s VIP 2 which was originally slated for release on 28 July to coincide with his birthday got postponed (also due to certification delays) and wished to avoid a clash with Ajith's film. On the sidelines, eight small and medium films were eyeing the ID weekend, including Udhayanidhi Stalin’s Podhuvaga En Manasu Thangam, Rana Daggubati’s bilingual Naan Aanaiyittal, Jyothika’s Magalir Mattum, Sibi Sathyaraj’s Sathya, the Ram directed Taramani, and a few others.

Suddenly, the entire release schedule changed when Dhanush tweeted the release date of VIP 2 as 11 August. The idea was that he could dominate the holiday weekend, which resulted in lot of other films dropping out. Now, 11 August — as per trade sources — will only have four releases: Dhanush’s VIP 2, marketed by Kalaipuli S Thanu (producer of Kabali) will get maximum screens, followed by Udhayanidhi Stalin’s Podhuvaga En Manasu Thangam, distributed by the market leader Thenandal Films; Rana Daggubati’s bilingual Naan Aanaiyittal; and Ram’s offbeat Taramani. There will also be a couple of little-known films waiting for a limited theatrical release. Some of the remaining films will go for the 18 August weekend.

Meanwhile, with Vivegam locking up the Vinayaka Chathurthi weekend on 24 August, the others will keep away for a week. Vijay Sethupathi has his long overdue Puriyatha Puthir coming up for a 1 September release. Also scheduled for the same date is producer CV Kumar’s directorial debut, Maayavan. On 8 September, four movies have announced their release: Vikram Prabhu’s Neruppada, Vijay Sethupathi’s Karuppan, Vishnu Vishal’s Katha Nayagan and Santhanam’s Server Sundaram. A week later, on 15 September, director Selvaraghavan’s long overdue Nenjam Marappathillai and Sasikumar’s Kodi Veeran are scheduled.

Two weeks later, on 27-28 September, the puja weekend will start with a bang as Mahesh Babu’s AR Murgadoss-directed bilingual Spyder is slated for release. And Sivakarthikeyan-Nayanthara starrer Velaikkaran has also announced a 28 September release date.

Abirami Ramanathan, president of Tamil Nadu Theatre Owners Association asked: “Where are the screens to release so many films? Most of them will eat into each other’s collections and the opening will get divided except in the case of a biggie like Ajith’s Vivegam. Far too many films are getting released in Tamil along with other language films, leading to a fight for screens.”

Till 4 August 2017, 121 Tamil films have already released, and the way it is going, the number of films to release this year will have crossed 200. The market has been buoyed by the success of the Madhavan-Vijay Sethupathi thriller Vikram Vedha and music director Hip Hop Aadhi’s debut as hero and director, Meesaya Murukku. Both these films are super hits and have turned profitable from Tamil Nadu theatrical rights alone for their producers. This has created positive energy in an industry going through a drought of hits and post-GST and ticket rate increase.

The major reason for the August/September rush is that these two months have maximum extended weekends this year. 7 August is Raksha Bandhan, 14 August is Janmashtami and 15 August (a Tuesday) is Independence Day. And the biggest of them all, 25 August, a Friday, is Vinayaka Chaturthi. Come September, there are more holidays: 1 September — Bakri Eid, 4 September — Onam, with the puja holidays starting on 29 September. The ideal time to release films is during the festival holidays, which brings in the family audiences; hence the big rush to release films.