Kochadaiiyaan review: A disaster of a film with terrible animation

As the curtain lifted and the first scenes of Kochadaiiyaan began rolling, I thought there was some practical joke being played. I saw a bunch of drawings made by the Etch A Sketch toy flashing before my eyes. The actors’ bodies looked like ninepins, and their faces looked like pencil drawn doodles on inflated balloons. There’s no way, I thought, that this could be the movie. So I assumed this was part of some fun little in-joke by the filmmakers, throwing a curveball by showing me hilariously terrible animation before the real movie starts. You know, something like the opening segment of Kung Fu Panda, only very ugly.

But as the minutes ticked by, I began fidgeting in my seat. The joke seemed to go on for far too long. Twenty minutes went by, but the real movie never came. Suddenly the horror dawned upon me. I went pale and my mouth went dry. What I was watching was really the ‘real movie’. I’d paid a fortune to watch animation made by a child using crayons dipped in his saliva.

Veteran megastars like Rajinikanth begin to feel like pals for their sheer entertainment value. I've been a fan of him for longer than I care to mention, so it'll take a pretty horrendous movie from him to raise my hackles. Kochadaiiyaan comes dangerously close to that level, and unlike Thailaivar’s other films, you’ll fail to remember anything about it half an hour after it's over. The only vague memories I have of the story involve Thalaivar seeking revenge against someone who was nasty to his dad. The rest of it all is a blur of massy songs, fire dances, giant dogs, the opening battle from The Mummy Returns, a pitched sea skirmish, and four thousand shots of Thalaivar doing the Dude Walk. 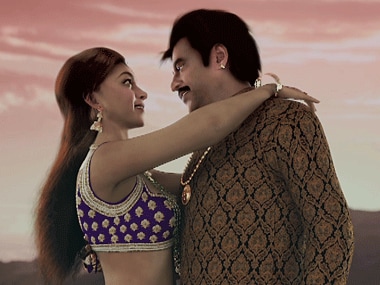 I was told that the technology used in Kochadaiiyaan was previously used in Avatar. From what I saw in this film, it was like a compounder leaning through a window to watch a surgeon work, and then walking in next day to perform a kidney transplant using a bedpan. I personally hate 3D because it dims colours and obscures the screen. For the first time, the 3D was an advantage to me because it shielded me from the atrocity flashing on the screen. When I watched Krrish 3 I assumed there was no lower rung of animation standards. But this film has well and truly proved me wrong - the CGI in Kochadaiiyaan can only be described as loose motion capture.

Director Soundarya is just 29, so to be fair this was a gigantic project to handle, and the budget of an Indian film is minuscule compared to $200 million Hollywood films. But it’s not just the animation that sucks, the story and narrative is so clichéd and head smacking predictable it hurts. It’s too dumb for adults and too ugly for kids. Even Rahman’s music is generic and dull. Plus, c'mon, how are we supposed to enjoy a film in which Jackie Shroff looks like the villain from Max Payne?

The fistful of action scenes and crossbow-sword-spear battles is scant but welcome sustenance, because the rest of Kochadaiiyaan is just one long boring low budget video game cutscene. And for the record, the hideous mocap faces of Thalaivar and Deepika Padukone do nothing to salvage the threadbare material. To those Thalaivar fans who still believe there simply must be more to Kochadaiiyaan, all I can offer is "Nope" and "sorry”. This is a disaster from start to finish.