Kaun Kitney Paani Mein is based in a village in Odisha, where old values and prejudices face a drought and poverty. Raja Braj Kishore Singh Deo (Saurabh Shukla) owns a village that has no water. He lives in a palace but hasn’t been able to pay his electricity bill for three years. Sozzled — he has to drink his whisky neat because there’s no water — he tells his son, Raj (Kunal Kapoor), “Raja ki baat toh door, hum toh praja bhi nahi rahenge.” It’s a masterclass in acting by Shukla, who is superb as the drunk and tottering king.

If only Kapoor could react suitably. The dismay you feel is mirrored every time the Raja calls his son and asks, “Kuchh kiya?” and his son has nothing to report. Only in case of the father-son conversation, they’re talking about sex. Sex that Raja Braj Singh Deo hopes will turn his fortunes around. 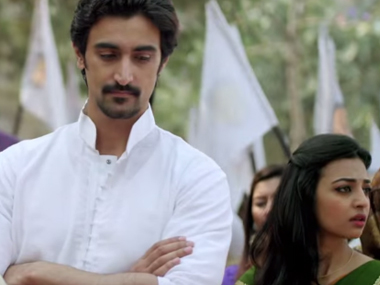 As a descendant of a wealthy Kshatriya family that has exploited poor farmers for generations, Raja Braj has inherited the barren hilltop village of Upri, in drought-struck Orissa. As a young woman, his sister committed the cardinal sin of falling in love with a low caste lad and the two young lovers paid with their lives. Not just that, Raja Braj’s father constructed a wall to keep the poor, lower caste lot out of Upri.

They moved downhill, to a village called Bairi, and begin to change their fortunes. Under the leadership of Kharu Pehalwan (Gulshan Grover) and his clever daughter Paro (Radhika Apte), the villagers toil, build dams, collect rain water and grow crops. Thirty years later, Upri is poor and impoverised, while Bairi is flourishing.

Defined by water politics, water is everything in Upri. It is even used as currency between the locals, with people paying everyone from prostitute to pundit with packets of water. A poor, desperate weaver decides to dig a well and then a secret tunnel that will connect to a lake in Bairi. His story, and what ends up being the fruit of his efforts, is the most telling sequence on the pathetic state of the poor.

Sick of his wretched circumstances, Raja Braj decides to sell off his land holdings. However, no one wants to buy a village that has no water. His son, Raj, wants money to go study abroad, but there’s no money for him either. Neither is there water, so father and son are reduced to drinking neat whisky.

Ultimately, Raja Braj and Raj decide that the best way to save themselves and Upri is to by getting Paro pregnant. This will put Kharu Pehelwan in a tight and vulnerable spot, and to save his daughter’s reputation, he’ll agree to whatever Raja Braj demands — including allowing Upri to access Bairi’s hard-won water. It’s not the most brilliant of plans, especially considering how feisty Paro is and how pregnancies have often been dealt with discreetly (from abortion to sending the woman to another place, the options have traditionally been many). However, since things don’t go according to plan, the merits of the plan may be ignored.

As the shamelessly conniving, arrogant King who lives on liquor and covers his lost dignity with a false moustache, Shukla is great as the hilarious but pathetic Raja Braj. Shot three years ago, before Radhika Apte became one of the most talked-about talents of Bollywood, the actress proves yet again that she can make the tackiest and dreary scenes come alive. Unfortunately, these two actors can’t make up for the problems in the film.

Writer-director Nila Madhab Panda made his debut with critically acclaimed I am Kalam. With Kaun Kitney Paani Mein, he has an excellent premise. He’s chosen to tell his story as a satire, which makes the film entertaining in parts, but he struggles to make it look and feel credible. Only the scenes involving Raja Braj and the poor weaver digging his well feel authentic. In Bairi, everything looks staged and all the characters are stereotypes. The romantic track between Raj and Paro is so theatrical, it could be straight out of a play.

Yet despite its pitfalls, Kaun Kitney Paani Mein has moments of fun and a subject that is relevant. Watch it for Saurabh Shukla.