Kajol on working with Karan Johar: 'You can't work alongside them if you don't talk'

Mumbai: They were one of the most popular Bollywood buddies once upon a time and have given hits such as Kuch Kuch Hota Hai and My Name Is Khan, but Kajol now refrains from even talking about filmmaker Karan Johar. 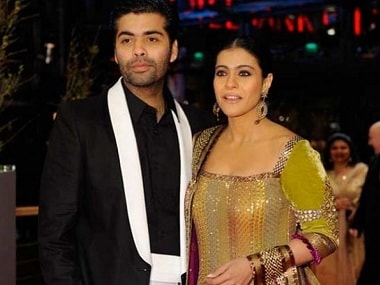 The actress also hints that chances of her teaming up with the the filmmaker again are remote.

In his autobiography, Karan had said his nearly 25-year-long friendship with Kajol ended prior to the release of his and her actor-filmmaker husband Ajay Devgn's films — Ae Dil Hai Mushkil and Shivaay. The two films clashed at the box office during Diwali in 2016.

Ajay had said "nasty" things to him before the release of films and so he vowed "no matter what, she's out of my life", Karan wrote.

In an interview, Kajol says she works with only those people with whom she has a certain kind of comfort level.

When asked if she is open to work with Karan, Kajol says, "Let me put it this way, I am not answering any questions on that particular point. If any of my other friends want to offer me a film I'll definitely do it."

The 42-year-old actress says even now, working with people she is comfortable with plays a big part in choosing roles, and that was one of the reasons she gave her nod to upcoming Tamil film, VIP 2.

The actress features in the Soundarya Rajinikanth- directed film along with Dhanush. This is her second Tamil movie after Minsara Kanavu (1997).

"I would not have been able to do this film, taken that chance with the film which is in another language without knowing that Dhanush and Soundarya would back me up and safeguard me," she adds.

VIP 2 is a sequel to the 2014 comedy-drama VIP and stars Dhanush, Amala Paul, Vivek, Saranya Ponvannan and Samuthirakani returning from the first film.

Soundarya had made her directorial debut with Kochadaiyaan which featured her father, Rajinikanth.