Have you read our complete review for Kabali yet? From Superstar Rajinikanth's performance to the supporting cast, Pa Ranjith's direction, the plot and slick styling, our critic Sreedhar Pillai breaks it down for you.

A 65-crore opening for Kabali?

The numbers aren't yet confirmed by any official sources, but trade pundits have estimated that by the end of Friday, 22 July, which is Kabali's first day in the theatres, the Rajinikanth starrer will have collected around Rs 65 crore. Trade reports peg the film's Day 1 domestic earnings to be around Rs 50 crore — this is based on the number of sold out shows in the various theatres where the film is being screened — and overseas collections to be around Rs 15 crore. Neither V Creations, the film's producers, nor Pa Ranjith, the director have validated these figures so far.

On my way to see Kabali.
No traffic on Hebbal flyover.
No traffic in Mekhri Circle.
No traffic near Commissioner's Office.#ThankYouRajini

Disgusting of @PicturesPVR to show #Kabali without subtitles after those at ticket-counter explicitly assured the film would run with subs.

In a Mumbai multiplex, Kabali was apparently screened without subtitles. Movie critic Raja Sen was among those who took to Twitter to express anger at being cheated of the film watching experience. Kabali is being screened in Tamil, Telugu and Hindi in city theatres.

In Bengaluru, Kabali screenings at five-star hotels called off

After the hype, the letdown.

News reports have said that plans to screen Rajinikanth’s Kabali at five-star hotels in Bengaluru had to be scrapped after the Karnataka Film Chamber of Commerce threatened to call off Kabali’s theatrical shows. JW Marriott, the Lalit Ashok, Royal Orchid and Crowne Plaza were among the hotels where patrons were offered Kabali screenings along with other refreshments for Rs 1,300. However, after the protests from exhibitors, the office of the deputy commissioner withheld permission for the screenings fearing a disruption of law and order, The Times of India reported. 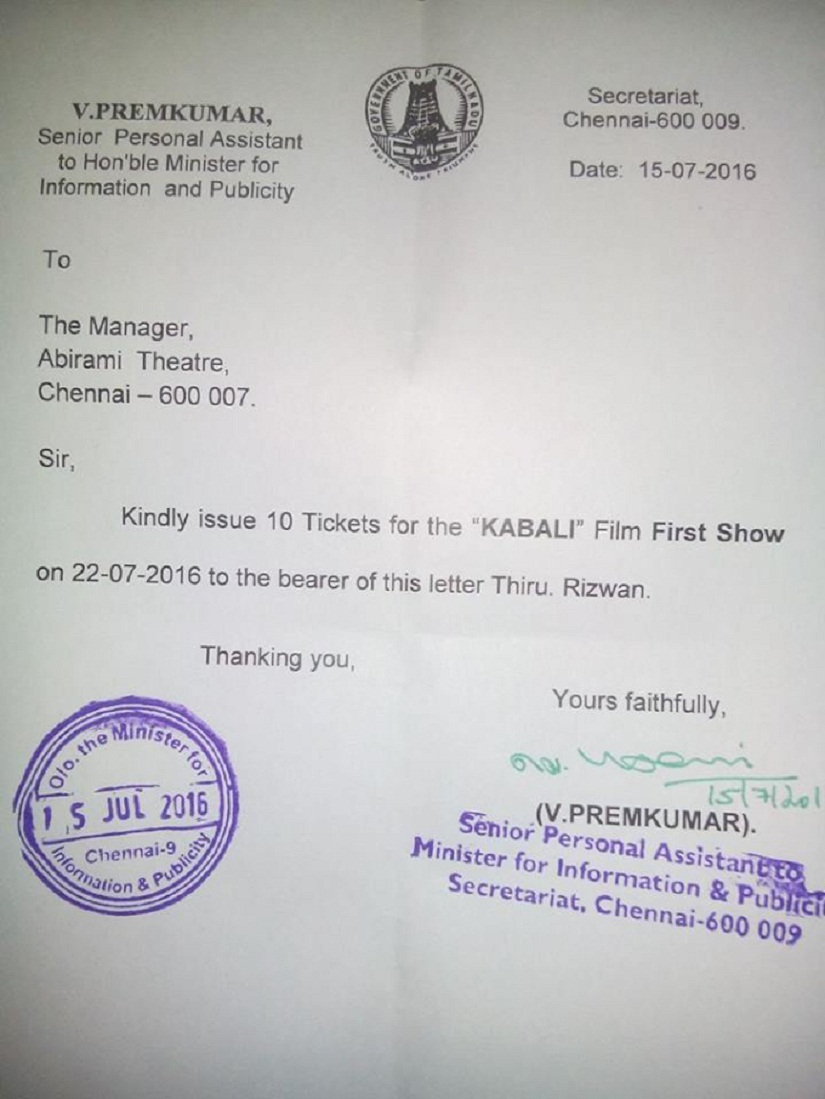 On Friday morning, 22 July, fans in Chennai were severely disappointed, as despite queuing up for several days, most hadn't been able to get tickets for Kabali's FDFS. Indeed, tickets had been booked out for almost all of its first week.

Several fans that Firstpost's Sandhya Ravishankar spoke with this morning, said that tickets had been booked by big firms and VIPs, leaving few for the common man who is the real Rajini fan.

A copy of a letter that has been circulated on Facebook for a while now seems to indicate that this is just what has happened. The letter (written on the official letterhead of the Chennai Secretariat) has been addressed to the manager of the Abirami Theatre, asking for 10 tickets to be reserved, and is signed by the personal assistant for the minister for Information and Publicity. It isn't clear if the letter is genuine.

Firstpost contributor and industry analyst Sreedhar Pillai wrote in one of his pieces this week: "The best gift you can give an important person in Tamil Nadu from whom you are seeking a favour is tickets for Kabali! Top bureaucrats and cops are putting tremendous pressure on the hapless staff of theatres to get tickets."

See a copy of the letter here.

After all the buzz, Superstar Rajinikanth's Kabali is finally in theatres.

And fans, who have waited over two years to see their idol back on screen, have been driving the massive hype around the film.

In Kabali, Rajinikanth plays an ageing crime boss who takes on the bad guys in Malaysia who have been oppressing the Tamil migrant community there. His wife is played by Radhika Apte.

Kabali opened in 4,000 screens all over the world on 22 July, Friday. It's an unprecedented number — but then everything about this film has been, fittingly enough, super-sized. It has already made over Rs 200 cr in pre-release business through the sale of rights for the various other language versions (apart from Tamil, Kabali is releasing in Telugu, Hindi, Malay and Malayalam, with talks on for Thai and Chinese dubbings as well), music and satellite deals.

It's not been all smooth sailing — the film's opening scene was leaked on Whatsapp, and it is believed illegal download links were available on the dark web.

However, Rajinikanth and his film have made it to the theatres and Firstpost is bringing you all the updates from the first day first show of Kabali as they unfold.

Explained: Who is Goldy Brar, detained in California, and what’s his link to the Sidhu Moose Wala murder?

Goldy Brar, the main accused in the conspiracy to murder singer-politician Sidhu Moose Wala, has been detained by authorities in California. The noted gangster, whose real name is Satinder Singh, is a close associate of Lawrence Bishnoi and operates from there through a module in Punjab

After confessing before the police, Aftab Poonawala said in court that he killed his live-in partner Shraddha Walkar in the ‘heat of the moment’. However, as per the law, his admission can’t be counted as evidence