The Judge review: Robert Downey Jr, Robert Duvall in one movie, and it's still as boring as a real court

Robert Downey Jr's list of achievements are varied. From snorting cocaine to channelling Charlie Chaplin, the range of Downey's life experiences and professional achievements is nothing short of impressive. However, the cruel irony is that the more famous Downey has become as an actor, the less acting he's done. With the exception of Tropic Thunder, we haven't seen Downey get under the skin of any character since the Iron Man series became a moneyspinner. Instead, just as Tony Stark wears the Iron Man suit, all the characters that the actor has played since then seem to wear the Robert Downey Jr suit. The Judge is no exception.

Hank Palmer (Downey) is an attorney in the mould of Bobby Donnell of The Practice. He's rich, he's successful and he defends clients who are usually guilty but can afford Hank's astronomical fees. When his mother dies, Hank returns to his hometown of Carlinville, a blink-and-miss-it town in rural Indiana, where nothing changes. There's easy camaraderie between Hank and his brothers, Glen (Vincent D'onofrio) and Dale (Jeremy Strong). With their father, however, the relationship is very different. 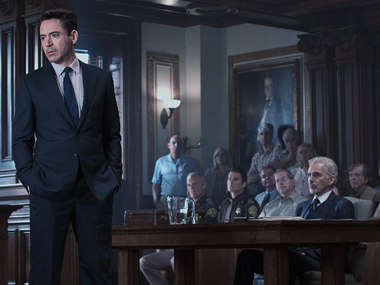 Hank's father is Joseph Palmer (Robert Duvall), who has served the town's justice system for the past 42 years as a judge and is known for being scrupulously fair. Father and son can barely tolerate each other. Initially, it seems as though the friction arises from Joseph thinking Hank is a city lawyer with no principles, but quickly, it becomes evident that the roots of this hostility lie much further in the past. Hank, however, is in no mood to untangle old knots. He just wants to leave Carlinville and is literally on a plane, making his exit, when Glen calls to tell Hank their father has been accused of murder. The only person who can save Judge Joseph Palmer is, of course, his son Hank.

Downey crackles as Hank, who is basically what Tony Stark would have been had he been a lawyer instead of a billionaire inventor. Duvall plays a proud old man, which one imagines isn't that much of a challenge for the actor who is 83. There's more than enough talent between these two men to prop up a mediocre script and they succeed in holding your attention for most of the 142 minutes of The Judge. However, the actors are not good enough to redeem the courtroom scenes that operate more like an Oprah Winfrey show episode than a murder trial. Schenk and Dubuque really should have watched a few seasons of The Practice while writing these scenes.

While The Judge does have its moments, the cast is not enough to make up for either the writing or the direction. Dobkin's previous efforts include Shanghai Knights and Wedding Crashers. From goofball comedy to courtroom/family drama is a leap and Dobkins fails to make the distance, weighed down as he is by Nick Schenk and Bill Dubuque's screenplay.

At its heart though, The Judge is not about a legal trial. It's about a father and son, and the idea of a legacy. Hank may be successful, but morally — and America, let us not forget, is as fixated on morals as we are in India — he's at his lowest when he returns to Carlinville. He's lost sight of the truth and the good, both professionally and personally. He needs his father to show him the way even though his father is the one who is technically in the wrong. Joseph, in contrast to his son, has lived upon the strength of his principles all his life and even when it seems like ludicrous idea to do so, he obstinately refuses to give up on them. If this reminds you a little bit of Alexander Payne's brilliant and poignant Nebraska, it should.

Unfortunately for Downey, The Judge is Nebraska gone wrong. Distracted from its focus by the need to include commerce-friendly details like a romance and zippy one-liners for Downey, The Judge flounders and loses its way, leaving the audience wondering why the questioning of someone accused for murder is progressing like a therapy session.

Not just that, at one point near the end, when you see Duvall slumped on a boat in the middle of the lake, you can't help wondering if he's fallen asleep out of boredom. The Judge is that long-winded.